Netflix, Amazon, Hulu or HBO Go: Whose original content do you actually need? 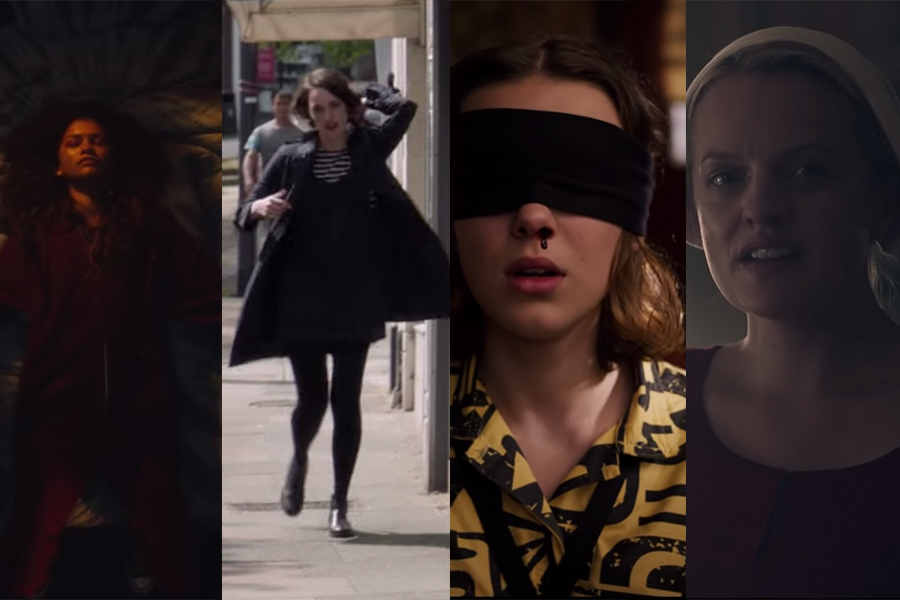 Left to right: 'Euphoria' on HBO Go, 'Fleabag' on Amazon Prime, 'Stranger Things' on Netflix and 'The Handmaid's Tale' on Hulu (Photos via YouTube/Graphic by Allison O'Reilly)

If you aren’t blessed enough to still be on your parents’ entertainment plan, it can be difficult to find ways to stream television — especially if you’re a broke college student and your sister’s ex-boyfriend changed his HBO Go password.

There are so many companies that offer unlimited streaming for a monthly cost. It can be hard to choose which one you should subscribe to, especially if there’s enticing, original content on each service. To help you decide, here’s a breakdown of each network’s best original series. You can decide which one is the best bang for your buck.

In my mind, Netflix was the original online streaming site. Netflix has a leg up because it’s been doing this for a while. Every time I visit Netflix it seems like there are five new original series that just came out. The constant content is great, but the quality varies across the board.

Stranger Things is one of Netflix’s highest quality shows — there’s a reason for all the hype. Originals such as House of Cards and Orange Is the New Black are also classic fan favorites. And Daredevil and Jessica Jones prove that Netflix can dabble and succeed in the world of superheroes. There are also comedies such as Unbreakable Kimmy Schmidt and Grace and Frankie that are witty and unique.

Netflix scores 4 out of 4 shells for quantity and diversity.

HBO Go is more focused on quality than quantity. Each show is a work of art, which could be why it’s six dollars more than Netflix. Drama is one of its most popular categories, and it’s probably less family-oriented and diverse than other networks.

My favorite original HBO series are Game of Thrones, Big Little Lies and Westworld. One of their newest additions, Euphoria, is also incredibly well-done and mind-blowing, just like the rest of their content. HBO’s standard of production is hard to match, so if you’re a TV junkie, you might want to consider pulling the trigger on the extra six dollars.

The most underrated streaming service, Hulu’s base plan is three dollars cheaper than Netflix and has a few hidden gems. The service offers a variety of plans, but the best deal for students is their joint effort with Spotify: A subscription to Spotify Premium for Students lands you a free subscription to Hulu’s basic, ad-supported plan.

Hulu’s comedy selection is hard to beat. It offers original shows and airs television shows that are difficult to find elsewhere, such as Modern Family. Hulu-produced comedies such as Casual, Deadbeat and The Mindy Project are quirky and offer a variety of types of humor. As for drama, The Handmaid’s Tale is one of my all-time favorite dystopian series. You might be surprised to find the amount of funny and unique shows Hulu creates.

Hulu scores 3 out of 4 shells for comedy and price.

Amazon Prime isn’t best known for its streaming service — most of us know the company for its two-day shipping or AI home assistants — but it’s important to include because it produces original content and will probably be stepping up its game in the near future. If you already have Amazon Prime, these shows are included in the Prime membership price!

I have yet to watch Amazon’s newest addition, Carnival Row, but it looks enticing and fantastical with big-name actors Cara Delevingne and Orlando Bloom. Amazon also produces two great comedies, The Marvelous Mrs. Maisel and Fleabag, both of which were spot-on recommendations from my mother.

Amazon Prime scores 4 out of 4 shells because it’ going to rule the world one day.