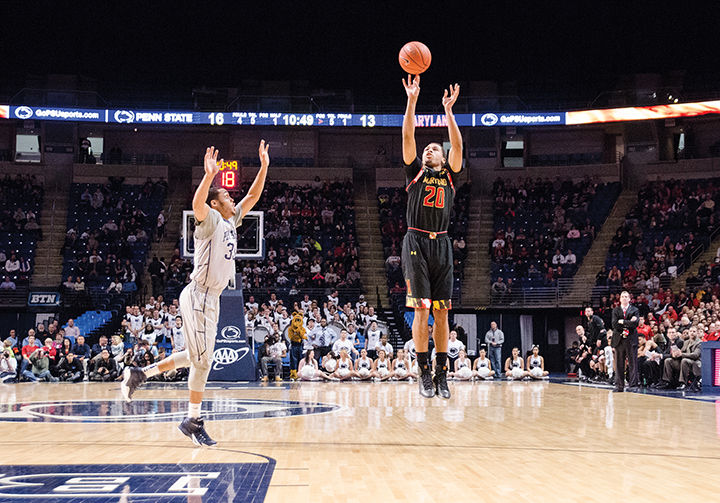 Well, our wishes have been granted. Don’t know what we are talking about?

With @thetournament coming up, Maryland doesn’t have a team in this year’s tourney.

If they did, who would you want on the team?

Quote tweet this or reply to let us know your starting five and bench.

Former Maryland basketball player Richaud Pack listened to our tweet and on Saturday night, he posted this on Twitter.

That’s right, there will be a Maryland basketball alumni team in next year’s TBT, The Basketball Tournament, a $2 million winner-take-all bracket-style tournament. TBT is into its sixth season and has grown into a 64-team tournament, single-elimination, similar to the NCAA Tournament.

The only stipulation is that players under NBA or WNBA contracts can’t play, though players who were on NBA Summer League rosters can play. Unfortunately, that rules out Jake Layman, Kevin Huerter, Alex Len and Bruno Fernando, but there are plenty of other Terps that might be on this roster.

Pack hasn’t announced anyone on the roster yet, but here are some names we would like to see on it. He did say that Grevis Vasquez will be coaching the team, but it’s unknown as to whether that will be a head coaching or assistant coaching role.

It only makes sense as Trimble currently plays in the National Basketball League in Australia. Players playing overseas are allowed on rosters. The current TBT champions are Overseas Elite, made up of exclusively overseas players, and they’ve won the past four tournaments. Trimble was an MVP candidate with the Cairns Taipans, finishing second in scoring with 22.5 PPG and received All-NBL Second Team Honors.

Another Maryland legend, Wells currently plays for VL Pesaro of the Lega Basket Serie A in Italy. He was with the Oklahoma City Blue of the G League until the end of last season, but he’s back overseas now. When you think of recent Maryland history, you think of Dez Wells and he would be a perfect player to have on the team.

He did reply to Pack’s tweet, which makes us think that he is for sure interested, and he’s still playing basketball. Carter is currently on the Shimane Susanoo Magic in the Japanese B.League and he would fit in perfectly with some of his former teammates, like Melo and a few more in this list.

While not as prominent as Dez or Melo, Nickens played an important role on a few of Maryland’s recent NCAA Tournament teams. At his peak, he can shoot the three around 40 percent and right now, he’s playing for St. John’s Edge of the National Basketball League of Canada. You might know him more for popularizing the “Running Man Challenge” viral trend, but on the court, he’s gonna show out and he might break out the dance after a win.

Smotrycz might be known more for being less popular than a potato during his time at Maryland, but the transfer from Michigan had a pretty important role in Maryland’s last season in the ACC. Another three-point specialist, he would be important. However, his current team might hinder that, as he’s playing for the Iowa Wolves of the G League. If he can, he’ll make an appearance somehow.

The recently graduated Dion Wiley finished his collegiate career at Saint Louis, where he made another NCAA Tournament appearance. He was with the Terps for three years, reaching the tournament in his first two seasons in College Park. Wiley is a sharpshooter and he would fit perfectly with this team.

Maryland fans will always love this Terps legend who made a game-winning block in the final seconds of Maryland’s opening-round game against Valparaiso in the 2015 NCAA Tournament. Ram was a bench player, a role player who got some good time on the court. He would be a fan favorite and an energy boost off the bench.

He only played at Maryland for one year, but he was part of the starting 5 that came into the season ranked No. 2 in the AP Poll. Sulaimon transferred from Duke, but Maryland fans quickly forgave him when the Terps reached the Sweet 16 for the first time since the national title years. Sulaimon currently plays for JDA Dijon of the Ligue Nationale de Basket Pro A in France. Gotta have another point guard for the god squad.

Allen began his college career with the Terps, playing on the team for two seasons, including their final season in the ACC, where he averaged 13.4 points per game in 20 games. Allen did finish his college career at Virginia Tech and his Twitter account seems to favor the Hokies, but Pack might be able to get him to change alliances when TBT 2020 comes about.

Maryland fans have very passionate opinions about this former top-10 recruit who decided to leave College Park possibly a year too early. His NBA aspirations haven’t ended up as he would have liked, but he’s still hanging around in the G League with the Rio Grande Valley Vipers. He would be an impact player down low and would provide size and scoring.

Ceko has stuck around the game of basketball, playing for MBK Banik Handlova of the Slovak Basketball League. His 7’1” frame is a massive advantage for this Terps roster if he joined the likes of Diamond Stone down low. That would be a low post presence never before seen in TBT.

There was no way this was going to end without mentioning the lifeblood of Maryland basketball, the social media legend, the towel-waving bench god. Obviously, if Andy T were to make this roster, he wouldn’t play, but you would definitely see him doing his thing with a towel around his neck, down at the end of the South Pole because it’s cold down there. You can’t have a Maryland alumni team without Terrell and his more famous towel.