‘The Office’ is leaving Netflix. Here are my 21 favorite funny moments from the show. 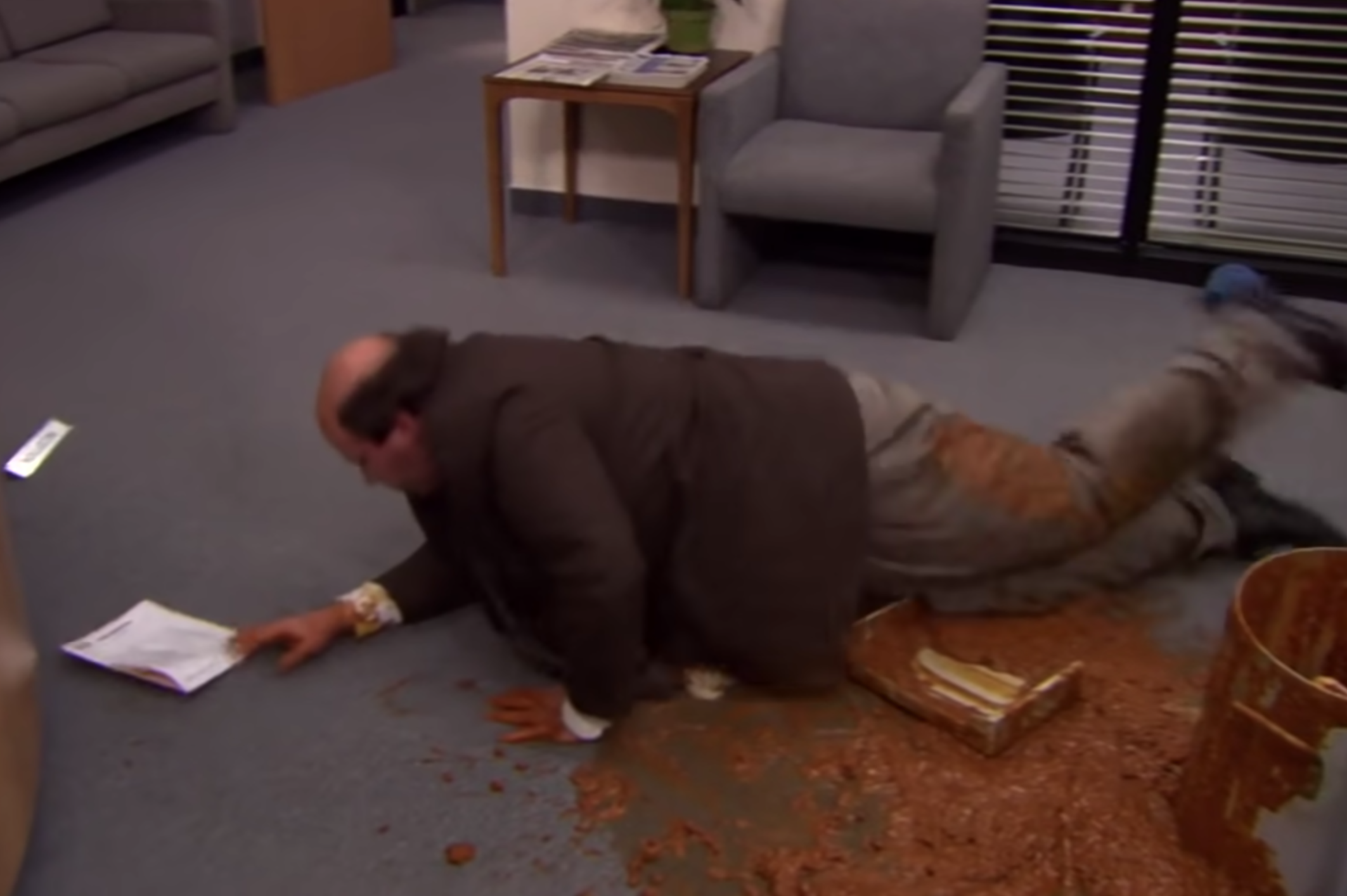 Kevin (Brian Baumgartner) spills his famous chilli on the floor in Season 5 of 'The Office' (Photo via YouTube).

Netflix recently announced that NBC will take back streaming rights to The Office for its own platform in 2021. And while that’s far into the future — giving you a copious amount of time to binge it if you haven’t — this is a little ode to the show that can always put a smile on our stressed-out, run-down-by-college faces. Here are 21 times Michael Scott and his crew really got us.

When Dwight makes his own fire drill
In the beginning of Season 5, Episode 14, Dwight decides to teach the gang a lesson about fire safety by starting a fake fire. As the group panics about their impending death, Dwight asks calmly, “What’s the procedure?” to which Michael responds, “Stay [censored, but we all know he said fucking] calm!” and I actually laughed out loud.

When Michael roasts everyone
In the following episode, Michael decides everyone needs to lighten up and hosts a roast for himself. After being hugely offended — because he’s the most sensitive person to walk the Earth — he comes back with gusto to roast the rest of the crew. My personal favorite is “Angela, where’s Angela? Well, there you are. I didn’t see you behind that grain of rice. Boom. Roasted!”

When Dwight finds a joint
Dwight acts as sheriff when he finds some pot in the office parking lot in episode 20 of season 2. He shows Creed a picture of some marijuana and asks if he knows what it is. Creed responds, “That is northern lights, cannabis, indica.” Dwight sighs with disappointment, “No, it’s marijuana.”

Creed honestly deserves his own spinoff.

When Michael drives into a lake
Michael trusts way too much in modern technology. When a GPS tells Michael to make a right, he does so, driving directly into a lake. Of course, Dwight tries to save him in water that’s probably three feet deep.

When Michael can’t find the turtles
Michael is every University of Maryland student looking for their friends.

When it was Diversity Day
The second episode of the series. Just watch it.

When Michael holds grief counseling
Probably not the most quoted scene in Office history, but still a gem nonetheless. Michael decides to hold a group therapy session in the middle of the workday and Ryan opens up by telling the story of his cousin Mufasa, who was killed in a stampede of wildebeests.

When Dwight gets a radio interview
When a radio host cancels an interview with Dwight, some of the staff decide to prank him (of course) and hold their own interview. Nothing is funnier than Dwight under pressure.

When the office attempts to learn CPR
Between Michael not knowing “Stayin’ Alive” by the Bee Gees, Andy flexing his acapella skills, Kelly dancing and Dwight pulling out a knife he keeps taped around his leg, this scene is quality all around.

When Michael burns his foot
For Michael Scott, breakfast in bed means leaving a hot George Foreman grill filled with bacon by your bedside.

When Michael makes a movie
Threat Level Midnight. Years in the making.

When Angela has her bachelorette party
The women of the office decide to surprise Angela with a stripper right before her wedding. If that wasn’t enough, the stripper turns out to be Meredith’s son, who, like a true professional, goes on with the show.

When Kevin makes chili
It’s his famous recipe and it’s what he’s best at.

When Jim faxes Dwight from the future
When Dwight goes to slap the coffee out of Stanley’s hand, I lose it.

When Michael welcomes the Stamford branch
Dwight and Michael make this informational 90s-esque rap video, “Scranton, the electric city.” I can’t think of a better way to be onboarded to a new job.

When Dwight doesn’t know who Justin Bieber is
Sometimes I wish I was as ignorant as Dwight. 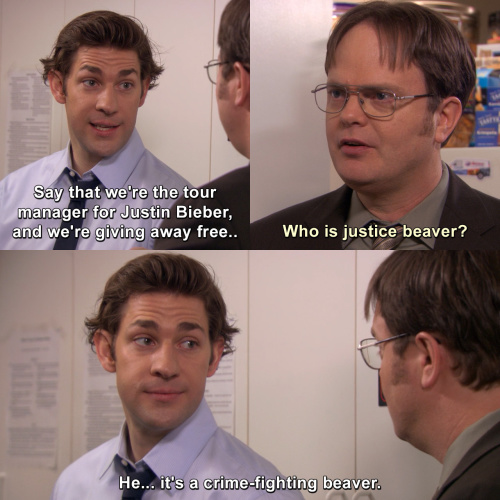 When Stanley doesn’t notice anything
After seeing that Stanley didn’t notice the difference between hot coffee and orange juice, the crew decides to push the limits.

When Dwight and Michael try to frame Toby
Michael buys some “drugs” off the guys at the warehouse and decide to put it in Toby’s desk. Dwight calls the cops and as they search through Toby’s stuff, all they find is a bag of … caprese salad — mozzarella and all.

When Michael has a dinner party
Michael and Jan move in together and decide to have some friends over. Michael is the absolute epitome of class as he describes the wine.

Whenever Creed says anything ever
Last but not least, I can’t forget about the one character that no matter what, makes tears roll down my cheeks from laughing. His one-liners keep this show together. God bless him.

Andy’s last words
Okay, I know I said I was done, and I know this isn’t as funny as the rest of the article, but I can’t write about The Office without including this heart-warming sentiment. As the gang sits in the office for their reunion party, Andy says the classic line I’m sure is widely quoted in high school yearbooks around the country. I tear up every time.

On ‘The Ascension,’ Sufjan Stevens lets modern confusion get the best of him