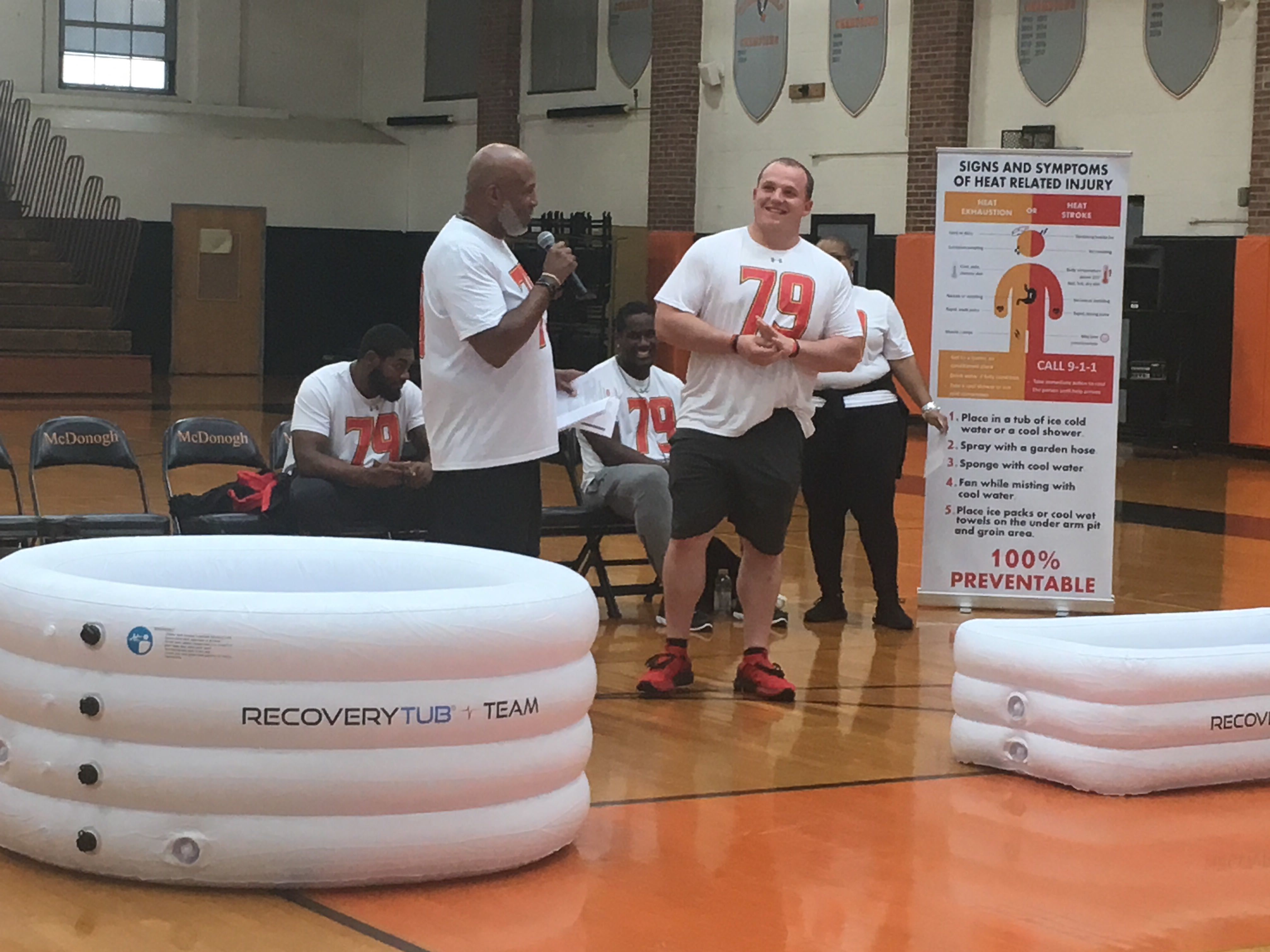 When Maryland linebacker Keandre Jones lined up with a tackling dummy in hand, he did so in hopes of adding some resistance to a fumble recovery drill. Jones did not expect what happened next.

The youth football player opposite Jones fired off the line, engaged with the recent Ohio State transfer and sent him down in a heap. Jones tried to laugh it off, but the damage was done. Offensive linemen Marcus Minor and Johnny Jordan couldn’t contain their laughter, and several more players crumpled to the ground in glee.

That laughter, on the one-year anniversary of Jordan McNair’s death from heatstroke suffered at an organized team workout, was why McNair’s parents decided to plan Thursday’s health and wellness clinic through the Jordan McNair Foundation, spreading awareness of heat-related illnesses and knowledge of how to combat them with area youth teams.

“This is the day, June 13th, that Jordan died last year,” Marty McNair, Jordan’s father, said. “So what better way to memorialize our son than to have a sports clinic teaching health and wellness and bringing young kids out to have some fun.”

Youth football players, coaches and parents attended the clinic at McDonogh School in Owings Mills — McNair’s alma mater — for more than fun with college players. It was an opportunity to learn about the dangers of heatstroke.

On May 29, 2018, Jordan McNair suffered heatstroke. Maryland trainers didn’t recognize the symptoms quickly enough, and didn’t properly treat it once they did. If recognized and treated promptly, heatstroke has a 100 percent survival rate, according to the Korey Stringer Institute, an organization dedicated to the prevention of sudden death in athletes.

McNair wasn’t placed in a cold-water immersion tub, and arrived at Washington Adventist Hospital in Takoma Park with a body temperature of 106 degrees. He died 15 days later.

Since then, the University of Maryland has implemented all 20 of the recommendations made by Dr. Rod Walters, a sports medicine consultant, in his September 2018 report. One of those recommendations was to have cold-water immersion tubs on-site during every practice, something the McNairs believe is a necessity for future heatstroke victims.

The Jordan McNair Foundation donated 20 tubs in total, one to each youth program that was in attendance, Marty McNair said.

“Our main goal is to educate as many people as we can,” Marty McNair said. “I’d rather 100 parents run on the field for every game and every practice [with cold water immersion tubs] as opposed to one dead child.”

Thunderstorms in the area moved the clinic indoors, but the change didn’t seem to dampen anyone’s spirits.

Whether it be Anthony McFarland high stepping around tackling dummies or Johnny Jordan giving a Michael Jordan-esque jumping fist pump, the Terps were honoring the McNairs’ wish to have fun.

“We take a lot of pride in doing things for the community, especially today,” running back Jake Funk said. “[Jordan] meant a lot to us as a team, and we are trying to do everything we can in his honor to have people remember how good of a person he was, how good of a son he was and how good of a teammate he was. That’s why we’re here today.”

Coach Mike Locksley, hired in December with the task of rebuilding a program rocked by tragedy, embraced McNair’s parents frequently at the event.

Locksley knows how it feels to lose a child. At his introductory press conference December 6, he pointed out Marty McNair in the crowd and explained how the two had grown close — first when Locksley’s son Meiko was fatally shot in 2017, and closer when Jordan McNair died last year.

So, Locksley anticipates a close connection with the Jordan McNair Foundation long into the future.

“When we talk about recruiting, you’re not recruiting for four years, it’s a 40-year relationship,” Locksley said. “As long as the foundation is going, Maryland football will always be a part of and take part in the things that this foundation offers.”

The memory of Jordan McNair was on full display at the clinic, with posters of McNair hung up across the walls and all the campers and football players decked out in shirts with the No. 79 on it, McNair’s former number.

Much like last season, McNair’s presence will be felt once again when the Terps take the field in August.