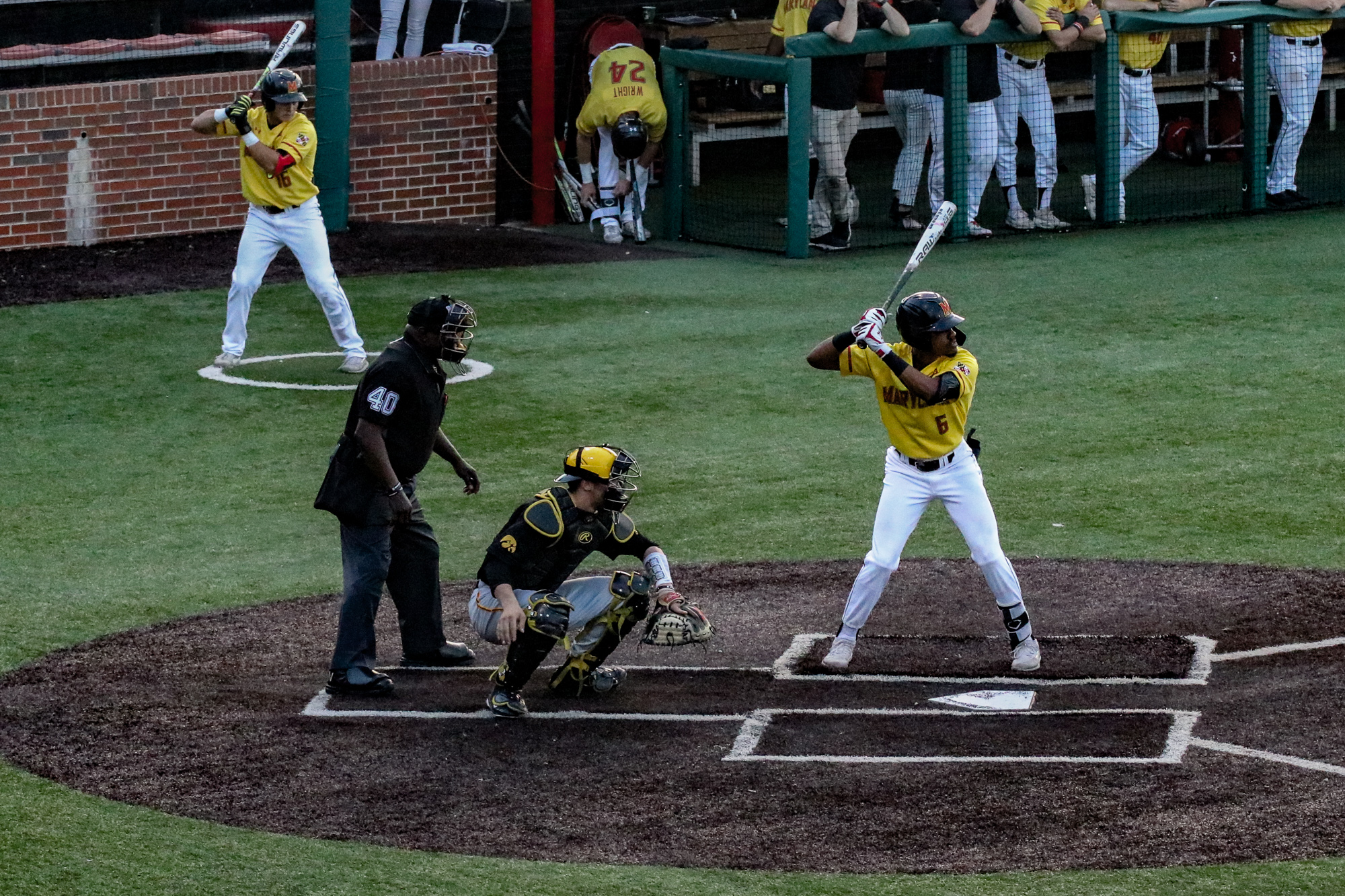 Shortstop AJ Lee waits for the pitch during Maryland baseball’s 8-4 win over Iowa at Bob “Turtle” Smith Stadium on May 17, 2019. (Ryan Romano/For The Diamondback)

Iowa had zero interest in seeing Maryland baseball shortstop AJ Lee stride to the batter’s box in yet another dangerous situation Saturday — this time with a runner in scoring position in the seventh inning.

In Thursday’s series opener, the senior had walked things off in the ninth, powering a two-run homer to left field, flinging his bat to the side and setting off raucous celebrations from his teammates spilling out of the dugout. On Friday, he reached base three times and drove in another run. He found his way on all five times in the series finale.

Since returning from an early-season ankle injury, Lee has been a pivotal part of the Terps’ path back to the Big Ten tournament, where they face No. 3-seed Illinois on Wednesday.

So Saturday, with a runner on, the Hawkeyes opted to intentionally walk Lee in his final at-bat at Bob “Turtle” Smith Stadium, choosing instead to face right fielder Randy Bednar and third baseman Taylor Wright — Maryland’s next best hitters. Lee’s 7-for-12 weekend punctuated an impressive Terps career and ensured it continues for at least another week.

“The walk-off home run was incredible,” closer John Murphy said. “That’s the one that everyone will look at. But the consistency he had all weekend is, I think, the most impressive thing that he did.”

Lee struggled to get going early in 2019, opening the campaign hitting 4-for-27 before missing seven games through injury. And when he returned, East Carolina swept Maryland for a second straight year, while Lee managed one base knock in 10 at-bats.

It appeared to be a continuation of his junior-year struggles, when he regressed from a standout sophomore year hitting .307 with 36 RBIs to batting .232 with a career-high 51 strikeouts.

“He didn’t have the year he wanted to have last year, kind of to the benefit of us, because it means we got him back as a senior,” coach Rob Vaughn said. “He got to push a reset button. AJ is the heart and soul of this group, in particular with the position players.”

[Read more: After blowing a four-run lead in the ninth inning, Maryland baseball walks off Iowa, 8-6]

Lee erupted in the March 19 matchup against Elon, breaking out with a 3-for-4 day highlighted by a two-run double and two-run homer. From there, Lee has seen his average rise to a team-best .301, blasting six longballs in addition to driving in 35 runs.

The Millersville native’s surge has been most pronounced in the final week of the season, helping to push his team into the Big Ten tournament after last year’s squad missed out. Against James Madison on Tuesday, Lee went 2-for-5 and added an important insurance run with his ninth-inning solo shot to cap off a 10-pitch at-bat.

Then came his final weekend in College Park, his emphatic game-winning drive Thursday, his third straight game with a homer on Friday and two hustle plays on the basepath in the series finale to manufacture a run. It was Lee playing at his best at the right time for a squad dangerously close to seeing its season end prematurely for the second year in a row.

“Coming back this year, everything was about winning,” Lee said. “It wasn’t about stats or individual goals. It was just about anything that can make the team better and put the team in a good spot to win.”

Before Saturday’s regular-season finale, Lee’s name was announced for his Senior Day. As Vaughn met Lee for a hug near home plate, the second-year coach thought back on his shortstop’s selfless career, which included stops at third base and center field to plug gaps in his team’s defense.

And he thought back to the phone call he received in his apartment all those years ago, when Lee was still at St. John’s College High School and Vaughn was just an assistant coach with the Terps. When Lee committed, Vaughn knew he’d prove to be an integral piece for Maryland. And after four years in College Park, Lee has proven to be just that.

“That guy is just the ultra competitor. At whatever he’s doing, he competes. And it doesn’t matter what event it is, doesn’t matter where you put him,” Vaughn said. “AJ is going to go on from here, and I hope he gets a chance to play pro ball and extend his career. But that guy’s going to be extremely in whatever he does.”