Reducing food waste needs to be a priority, especially on college campuses 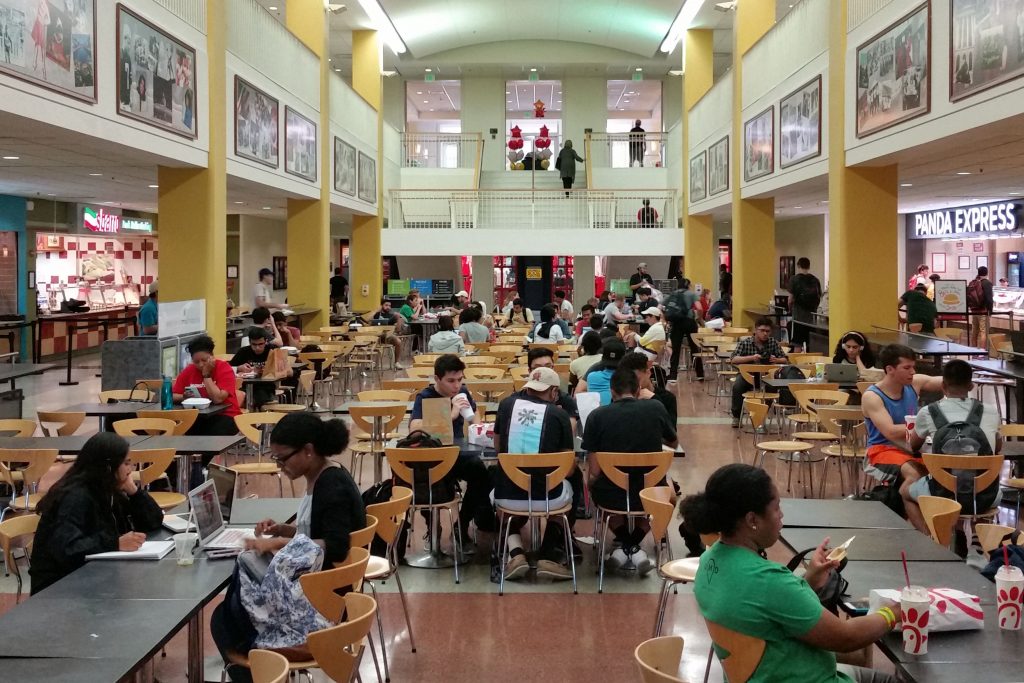 Students eat lunch at the Stamp Student Union food court on May 9, 2018. (Ryan Romano/For The Diamondback)

Living in an apartment my sophomore year helped me realize that dining halls produce an absurd amount of food waste. Over the past couple of years — thanks to meal prepping and becoming more environmentally conscious — I’ve been able to significantly reduce my own personal food waste.

Students should recognize how much food waste they actually produce. Somewhere between 30 percent and 60 percent of the waste created on this campus is compostable. But composting bins are still limited to just 12 of the more than 30 residence halls at this university and a variety of other buildings such as McKeldin Library and, on game days, Maryland Stadium. At the same time, South Campus Commons doesn’t have composting at all.

Since South Campus Commons residents all have kitchens, it would make sense to prioritize composting in these buildings. All students living in a dorm without a private kitchen are required to have a dining plan. This means that the majority of their food waste is likely produced in the dining halls, all of which collect compost. Students in South Campus Commons and suite-style dorms such as Allegany or Calvert halls don’t have easy access to composting.

In order for me to compost my food scraps when I cook every week, I would have to buy compost-approved bags, collect waste and then find time to take it to Stamp Student Union or McKeldin. While I would be willing to go to those lengths to compost my waste, I know the majority of students definitely wouldn’t. It would be significantly easier to have compost bins available in my apartment building. I could simply take my waste in a container and dump it in without having to worry about getting compostable bags or planning my day around taking it across the campus.

Even though dining halls likely produce the most food waste on this campus, students with private kitchens also create a decent amount. I do recognize, however, that it takes time and money to implement composting initiatives in more apartment-style buildings. In place of that, there are other things students in on-campus apartments can do.

According to the Environmental Protection Agency’s “Food Recovery Hierarchy,” source reduction is the best way to reduce wasted food. Source reduction simply means only buying food that you can realistically eat. For food recovery, the EPA advocates for prioritizing source reduction over feeding the hungry and feeding animals, and it marks them as more desirable than composting or throwing away food. Reducing the amount of excess food we purchase in the first place is the best way to reduce this aspect of our carbon footprint.

Students in apartments can also freeze food they don’t think they will be able to use within a week or two. Items such as bread, most fruits, herbs and many vegetables can be frozen and used later in cooked meals or smoothies. The National Center for Home Food Preservation has a great resource on what foods can be frozen and how to properly freeze them. Freezing food for later use prevents it from spoiling and being thrown out, allowing you to reduce your waste and also save money.

These are just two things students can do to reduce their food waste production in on-campus or off-campus apartments, but there are many more. According to the United Nations Food and Agriculture Organization, global food waste makes up eight percent of greenhouse gas emissions. This can easily be reduced if we’re all more conscious about what food we buy and how we use it. Reducing our carbon footprint — whether it’s food waste, water and electricity consumption or recycling — should be a priority for everyone.