Review: Maren Morris delights a sold-out crowd at The Anthem 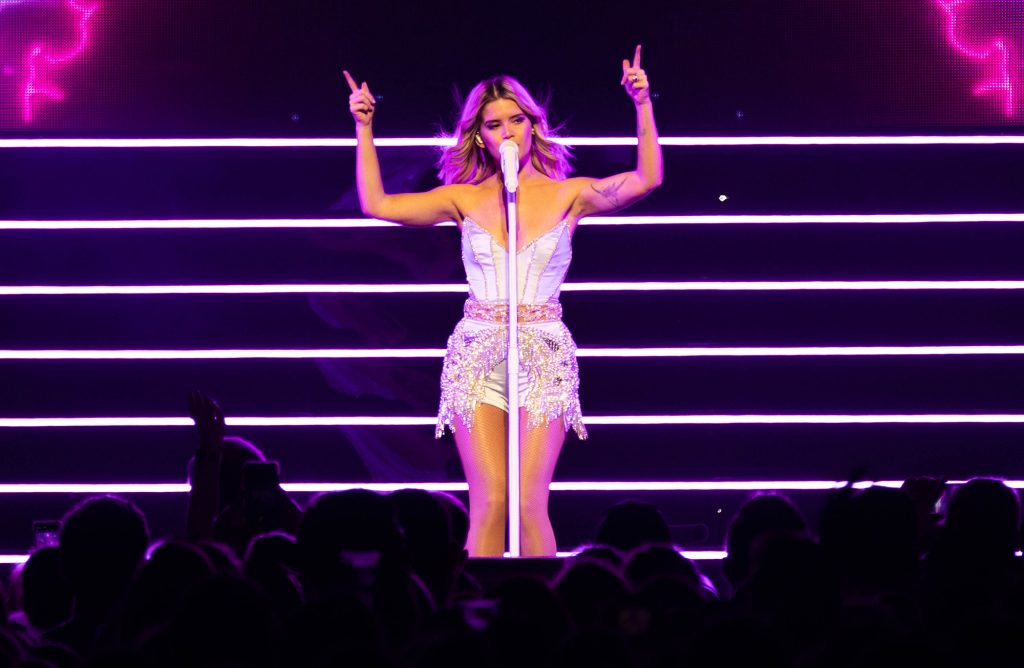 Maren Morris performs at The Anthem in Washington D.C. on May 2, 2019. (Julia Nikhinson/The Diamondback)

As you may be able to tell from her album’s title, Girl, Maren Morris is all about female empowerment — and her concert on Thursday at The Anthem proved it.

Opener RaeLynn did her duty to amp up the crowd for Morris’ performance, clad in camo and strutting around the stage to a few of her songs. The most memorable part came from when she snuck in a slower, twangier version of Ariana Grande’s “thank u, next” during her song, “Bra Off.” With her high ponytail and small stature, it was almost possible to mistake her for Grande herself.

Even before Morris performed “Girl” — the titular track of her latest album — it was evident she was putting on a show for all the girls in the crowd. The lyrics “don’t lose your halo” flashed on the screen before she started singing, reminding the audience to always stay true to themselves even in the hardest times.

Ascending from below the stage onto a podium wearing an ethereal white sequin dress and bearing a sleek, white guitar, she was purely angelic — ironic considering she came from below rather than above.

While Morris didn’t have the most intense stage presence, she was strategic about the staging elements for each song. Her sequin dress acted as a mirror, reflecting the colored lights — whether they were green ones paired with “Rich” or red and blue ones for her performance of “Common.”

[Read more: Review: Maren Morris has most of the pieces on new, radio-friendly album]

Fog crawled across the stage for slower numbers like “Girl,” and Morris knew all she had to do was provocatively lie on the stairs on the stage while singing “Make Out With Me.”

Morris almost never let the crowd’s enthusiasm fade. She played gleeful bops one after another, from the giddy strumming of “The Feels” to “‘80s Mercedes,” during which bubbles fell and hovered above the crowd.

Morris also didn’t forget to note the significance of Thursday’s concert; “This is the most tickets I’ve ever sold,” she said, to which the crowd erupted in cheers.

Her vocals were there (hello, high notes on “Gold Love”), and her guitar playing was on point. When she leaned back at a nearly 90-degree angle while rocking out to “All My Favorite People,” I gasped.

And yet through it all, the themes of empowerment were there. On “To Hell and Back,” she urged listeners to be with someone who treats them as an equal. The halos motif returned when she interspersed a stunning rendition of Beyonce’s “Halo” into “Second Wind.”

Morris validated any woman with a dream when she reflected on being told that no one liked hearing songs on the radio about women being sad before she released “I Could Use a Love Song.” The song went on to become her first No. 1.

As the energy level remained high throughout the show, at times the crowd not only reflected Morris’ energy but amplified it. The crowd belted the chorus of “Rich” so loudly that Morris let everyone sing one round on their own.

And you’d think the crowd would sing along most intensely to “The Middle,” the 2018 electro-pop Morris features on, which she used as her close, but no. Morris’ “My Church” took that prize. The crowd was so loud that as she warmed up with just her acoustic guitar and teasing the lyrics to it, you could barely hear her.

As someone so compelling to watch onstage and so thoughtful with the message she chooses to convey, Morris is, without a doubt, a country force to be reckoned.