What I’ve learned from Game of Thrones: Don’t work for evil institutions 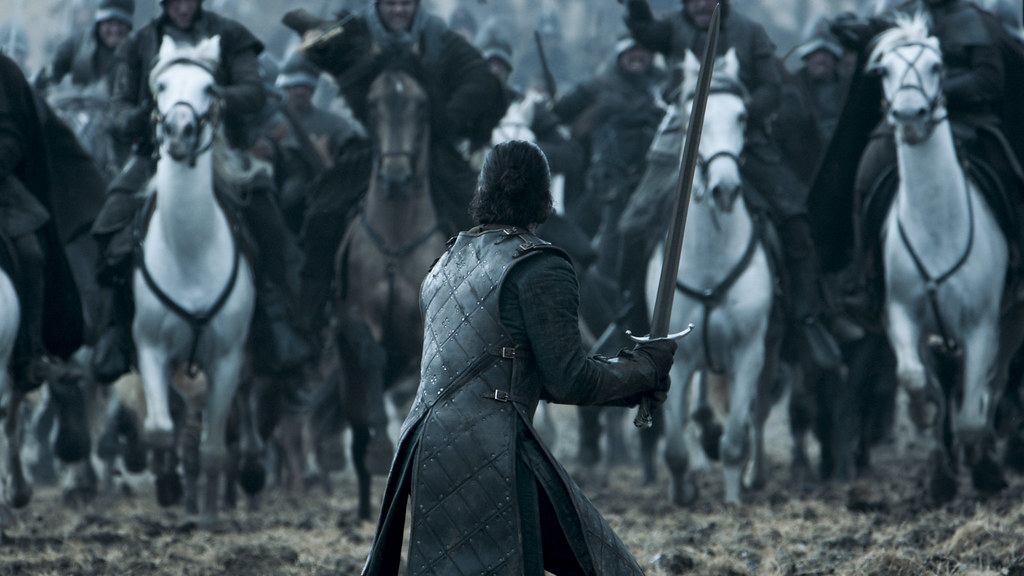 A scene from the HBO series Game of Thrones. Photo via Flickr.

When I need to escape from reality, I like to watch Game of Thrones. When I watch dragons burn armies to a crisp or see the Night’s Watch fight the army of the dead, my worries disappear. Yet a recent SGA hearing discussing divestment from defense contractors reminded me just how eerily similar our reality is to the violent, gruesome world of Westeros.

At the Student Government Association’s general body meeting on April 24, students came together to discuss a resolution proposing the University of Maryland’s administration divest from companies accused of facilitating human rights violations in Palestine.

The resolution’s supporters testified that this university has investments in and relationships with several companies that sell fighter jets, cluster bombs and surveillance technologies that have been used to discriminate against, torture and kill Palestinians. Among the worst offenders are Lockheed Martin, Northrop Grumman, BAE Systems and Boeing, some of the top military contractors for the federal government in 2017. To do our part in repairing these companies’ years of harm, supporters claim, the University System of Maryland must divest its endowment holdings from these companies.

This university should not be supporting companies that profit from human rights violations anywhere. That much is clear. Yet as important as it is for the system to divest from these companies, the resolution’s failure to pass shows that systemwide divestment is still a long way away. So in the absence of full divestment, it is now on each of us as students to educate ourselves on how we choose to cooperate with institutions that profit from war. Fortunately, Game of Thrones is here to teach us what’s at stake.

A frequent argument from opponents of the bill was that divestment from these companies would hurt students’ job and internship opportunities. Those students may be right: Lockheed Martin and Northrop Grumman are among the top employers of this university’s students.

University-wide divestment could hurt those students’ chances of getting jobs, but students should not want to work with these companies in the first place. These companies profit from the wars, civilian deaths and ecological destruction taking place around the world, from Palestine to Syria, Yemen to Iraq, and to our own homes in the U.S., as pointed out in past columns condemning Lockheed Martin, Raytheon and Northrop Grumman. As students, we have an obligation not to work for such violent institutions. We can look to Game of Thrones characters for proof.

Whether you are an intern, a receptionist or a software engineer, facilitating the work of such destructive institutions is akin to fighting for the Lannister army. Even those who start as lowly chemists like Qyburn or security guards like Ser Gregor Clegane eventually get roped into aiding Cersei in her most dastardly deeds.

For those who would claim that working for such companies provides important financial security, we’ve seen the corrupting influence of power and money on characters such as Littlefinger, which ultimately led to his demise.

Even fan-favorite Bronn — though he fancied himself a rogue mercenary who could make his profit and keep his friends safe without killing anyone he loved — is now being tasked with murdering two of his closest friends. Had he cut ties with the Lannister army sooner, following the lead of loyal squire Podrick, maybe he wouldn’t be in such a tough spot.

Ultimately, we are deluding ourselves if we believe it’s possible to be moral individuals working in immoral institutions. Only by abandoning Cersei’s army could Jaime Lannister atone for his past sins. Only by leaving the complacent Citadel and joining the revolutionaries could Sam use his medical and historical knowledge to save the Seven Kingdoms. And only by cutting all ties and refusing to work with military contracting companies can we hope to save our world from impending doom and destruction.

So to my fellow graduates hunting for job offers, before you sign any contracts, ask yourselves: Would you rather be like Cersei or Jaime? The Mountain or the Hound? Euron Greyjoy or Yara Greyjoy? Don’t work for defense contractors. Fight for the living, not for the army of the dead.