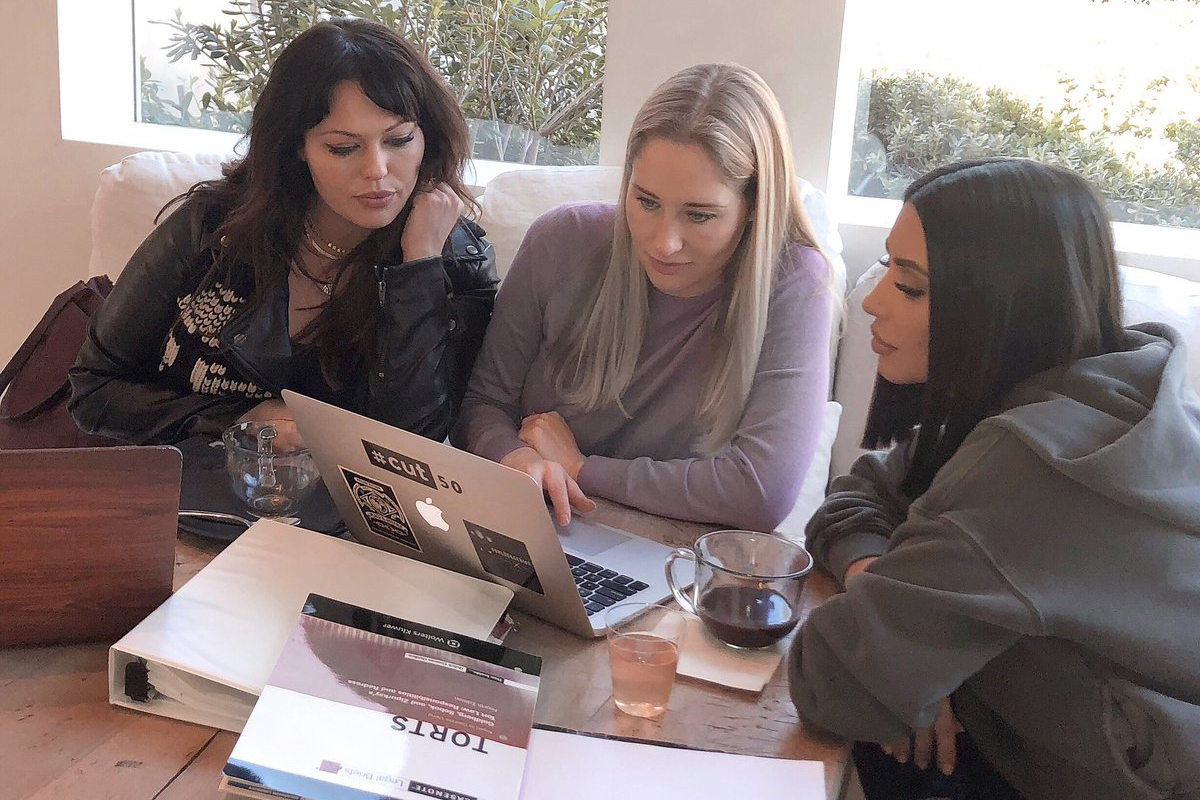 Kim Kardashian West studies law with Jessica Jackson and Erin Haney in a photo she shared on social media. (Photo via Twitter)

By Alyson Trager
For The Diamondback

In a recent interview for a Vogue cover story, Kim Kardashian West announced her plan to become a lawyer. Trust me, I know what you’re thinking. But let’s take a minute to discuss what her decision means for women as a whole.

In June, Kim assisted in the early prison release of Alice Marie Johnson, a 63-year-old woman who had been serving time since 1996 for a nonviolent drug charge. Kim met with President Trump — even though critics claimed it would end her celebrity career for good.

She was met with huge success: Johnson was released early, and the whole experience made Kim want to learn more about the law. Since then, she has begun a four-year apprenticeship at a San Francisco law firm, and hopes to take the bar exam in 2022. Though an unconventional method to become Kim Kardashian West, J.D., this is all by the guidelines of the state of California

Kim said she wants to make a difference in the prison system, something many people would agree is not working the way it should, as it often puts nonviolent offenders behind bars for an unjust amount of time. She sees these flaws and yearns to understand more about what the lawyers surrounding her discuss. She doesn’t just want to be the celebrity in the room — she wants to be able to back up her emotional arguments with legal ones.

I’m sick of hearing people make comments about how she’s a joke or how she should stick to what she knows, insinuating that she’s only good for her looks. I find this completely baffling, especially when it comes from fellow women. This is a crucial time for women to build each other up — pushing each other to take more risks and pursue our passions. By telling Kim she should “stay in her lane,” as many have on social media, we’re telling her that she’s nothing more than a brainless celebrity who has no right getting involved in the complexities of law.

Kim is a role model to many women, not to mention her own two daughters. She’s showing them that it’s never too late to start a new path in life and that helping others is always the right thing to do.

When I was younger, my role model was Elle Woods — the fictional star of Legally Blonde — and, as cliche as it sounds, I wanted to grow up to be a lawyer just like her. Though she got into Harvard University as a sort of fluke and originally only studied to get back at some boy, the hard work she put in to win the final case was no accident. And come on, what woman hasn’t started a project as a form of pent-up rage toward the patriarchy?

Elle Woods showed young women that anything is possible with creativity, determination and a can-do attitude. I’m not the first to notice the similarity between her and Kim, and it’s important we don’t forget about these women, who shamelessly made a complete 180 in their career to work diligently toward a goal.

Over the last few years — and over the course of American history — women have been fighting tirelessly to make their voices heard. By publicly tearing down one woman, we reverse a lot of the work we’ve done. It sends a non-unified message that hurts not only the woman looking to change her personal story, but the rest of the women who could have looked up to her.

At the end of the day, Kim is using her platform to help others. Why are we faulting her for that? As she said in an Instagram caption addressing the negativity, “I want people to understand that there is nothing that should limit your pursuit of your dreams, and the accomplishment of new goals.”