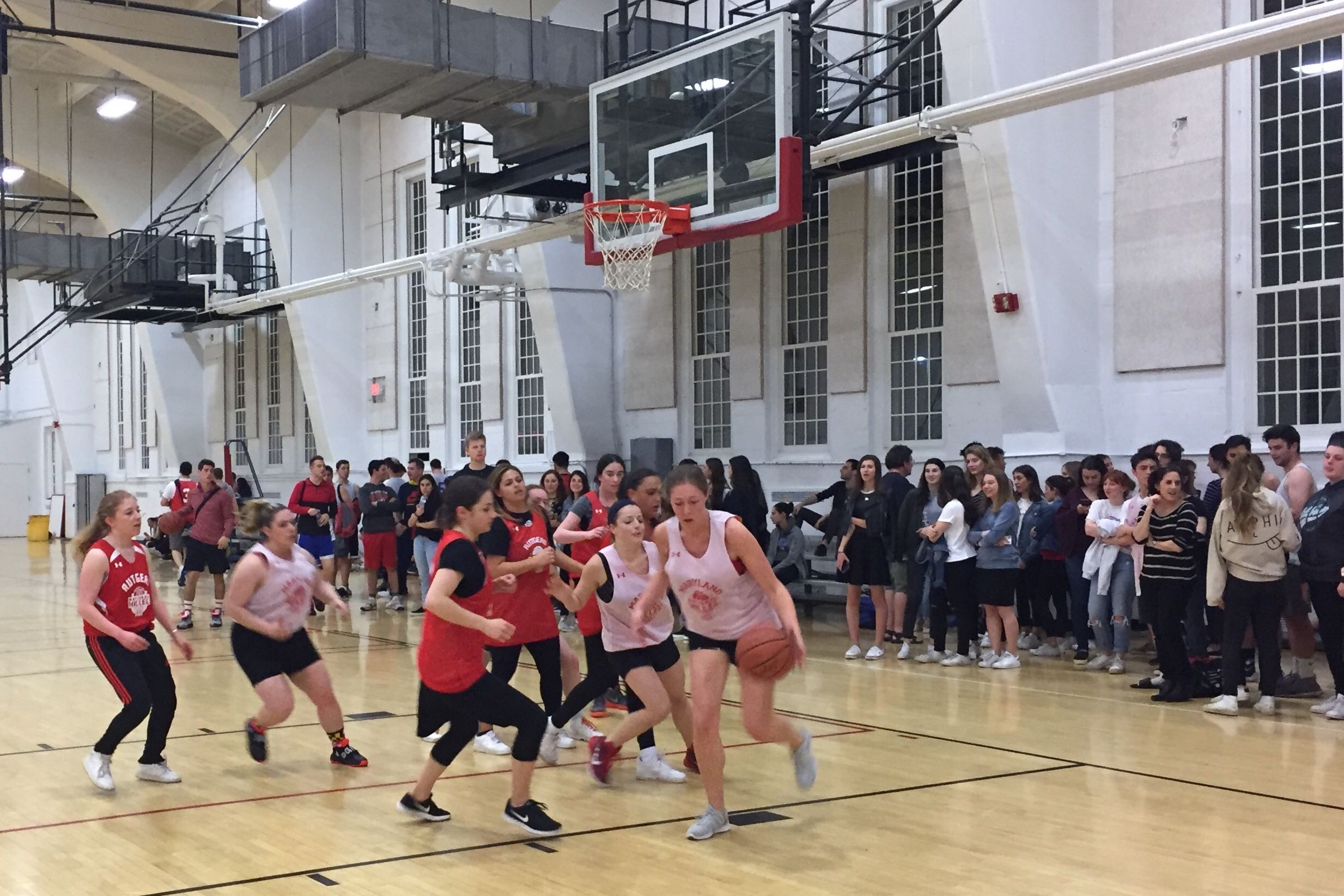 By Ian Round
For The Diamondback

It was midnight, and the atmosphere inside the Reckord Armory was intense.

Teams from as far away as Texas, Kansas and Chicago had been playing basketball for several hours. By the time their games ended, it was past 1 a.m.

It was the second round of the National Hillel Basketball Tournament where as many as 10 teams were playing at once. This was the ninth year of the tournament, hosted annually at this university and organized entirely by student members of Maryland Hillel.

Saturday night of the tournament is “where the magic happens,” said David Stein, the chairman of the tournament’s 27-member board. The championship games were Sunday, but with fewer teams playing, the energy levels had dropped.

Almost 300 players from 42 teams attended, said board member Leeron Carmi. She said 350 fans were registered — on top of that, they expected 200 unregistered fans to show up. Many schools sent multiple teams.

“It’s a whole weekend that brings Jews together from all across the country,” Carmi said. She described the weekend as not just a tournament, but a “cultural event.”

Each team played three “pool play” games Friday. The games were played with 10-minute halves and a running clock. The teams were then sorted into tiers for Saturday night’s competition. This university fielded six men’s teams and one women’s team.

Nicole Feigenblum, a senior and a co-captain of Maryland’s women’s team, said she appreciates the behind-the-scenes role played by the board.

“I thought it was a joke when they said it was student-run,” said Feigenblum, a kinesiology major.

Feigenblum said that after working so hard all year, they won’t know what to do with themselves after the tournament.

“They’re exhausted and they’re gonna have a really weird week next week,” she said.

Victor Zalta, a junior finance major at Yeshiva University in New York City said this university’s Jewish community is “amazing” and “vibrant.” He said in a way, it’s better than that of Yeshiva, a Jewish university, where many students take the subway back home for Shabbat with their families.

“Me and my friends have been talking about this weekend for months,” Zalta said. This was his second time playing in the tournament, he said, and a chance to see friends from other colleges whom he hasn’t seen in years.

Outside, on the steps of the Armory, people took a break from the loud, sweaty arena. They ate pizza, connected with old friends and made new ones.

On Friday night, players and fans filled a dining room in Stamp Student Union for a Shabbat dinner.

By all accounts, the weekend was about more than basketball. Stein said he doesn’t even care about the sport.

“The way I connect to Judaism is through community,” the senior nutrition and food science major said at the dinner. “It’s all about how I can help other people.”

Gavi Gewirtz came to the tournament to visit her friends. She said the energy in the Armory was “very hype.”

“I just like to watch people get really passionate about the games,” Gewirtz said.

Zach Epstein, a sophomore at the University of Texas at Austin, wore cowboy boots “so intentionally” to the Shabbat dinner. His voice was raspy after yelling during the pool play games. He said this tournament is his “favorite time of the year,” and that he gets to “connect through the game and the religion.”

Players at the tournament may not have varsity-level skills, but they play hard. Epstein and his teammate, sophomore Henry Corwin, both played on their Jewish high schools’ teams. Corwin said despite their experience, they still “can’t carry the team.”

“Some of the talent here is really incredible,” Corwin said.