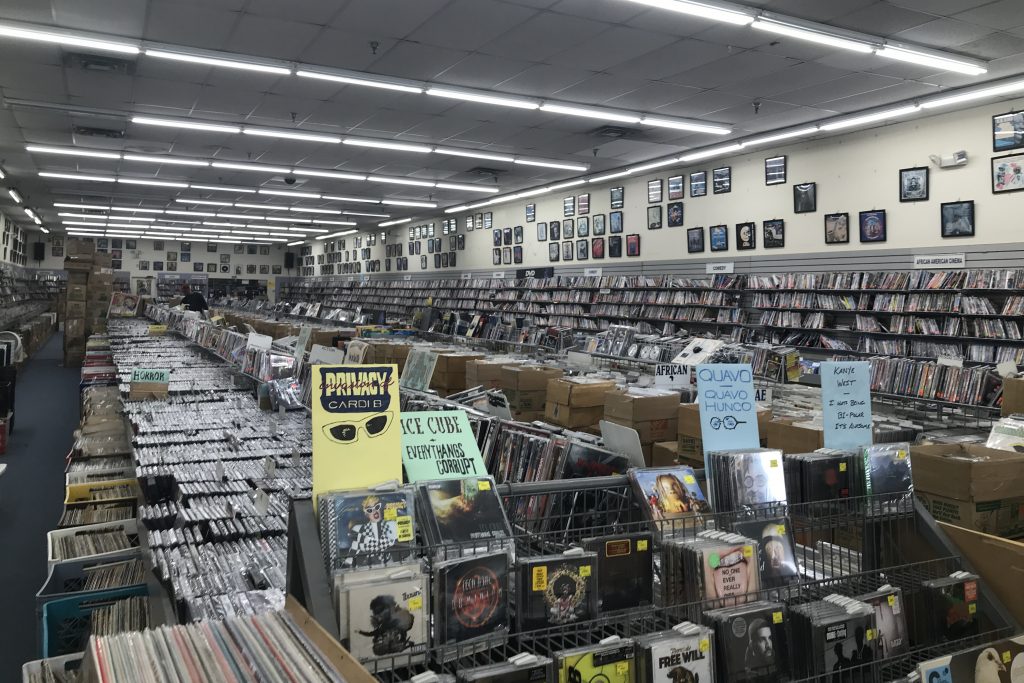 Countless boxes of records and CDs fill the floor of CDepot in College Park (Audrey Decker/For The Diamondback).

Younger generations have grown up with entertainment at their fingertips. Spotify, YouTube, Apple Music and SoundCloud make streaming music extremely easy. But even though most of the world’s music is readily available, streaming gives us nothing to appreciate physically. So, vinyl records are still popular — and people still celebrate Record Store Day.

Stores across the world participate in Record Store Day on April 13, and release special-edition vinyls and CDs specially made for the holiday. Simon Peterson, manager of CDepot in College Park, said some exclusive albums are released for Record Store Day. Some smaller bands will make something special for the day, and some labels will reissue a rare record that people have been coveting for years.

When CDepot opened, it only sold CDs and DVDs. It started selling records to stay in business. Record Store Day helps bring new customers to their store, Peterson said, and the art of vinyl records keeps people interested and excited about new releases. He said they had almost 50 people lining up outside the door on Record Store Day in 2018.

“I think it’s the art [of records]. When you’re looking at a screen, playing Spotify or whatever, all you got is a list of text or a grid of album covers. I guess that’s okay, but it’s nice to hold a thing,” Peterson said.

Kids these days are doing what kids did in the ‘50s, sitting down with friends, putting vinyl on and listening to it, said Rick Johnson, the event’s national project manager. Johnson said the reason albums are cool again is because of Record Store Day and the underground hip-ness records have to them.

“People these days love craft beer… you don’t buy a 12-pack of Bud [Light] — you go to a craft beer place and you sit down and you enjoy something that’s been handmade and that may cost more, but it’s the experience,” Johnson said.

The experience of buying, playing and listening to an album is the appeal for many people who listen to records. Music “means more” when you have the original album and you’re sitting down and playing it in your room, Johnson said.

Ruby Chervin, a senior government and politics major, said she has yet to go to CDepot in College Park, but usually borrows records from her parents or buys vinyl from the internet. Records have such an appeal to this generation because record collections look cool and artistic, Chervin said.

A certain nostalgia is associated with vinyl records as well. When Chervin was 16 years old, she watched a movie about Johnny Cash — afterward, she told her dad how much she loved the music in the movie, so he put a record player in her room and gave her a Johnny Cash album. Since then, she’s bought a few more albums and loves playing them on her record player.

“Carefully placing the needle on a record, hearing the small scratch, the hiss and pop of the music starting to play, and the full sound coming from the speaker is something you can’t get from playing a song off of Spotify,” Chervin said. “It is a completely different way to experience music.”