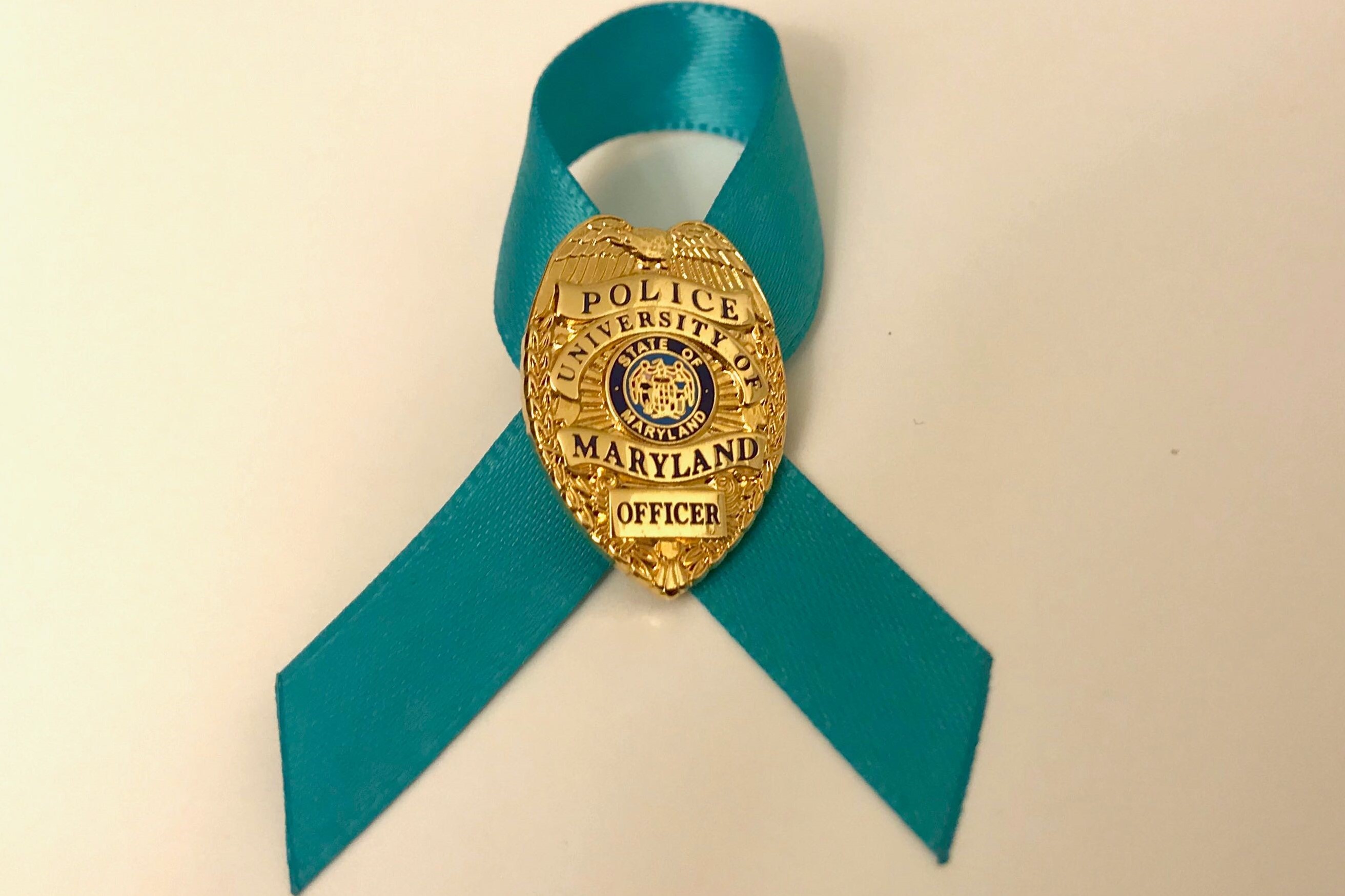 One of the teal ribbons worn by University of Maryland Police to raise awareness for Sexual Assault Awareness Month. (Photo by Samantha Hawkins/For The Diamondback)

By Samantha Hawkins
For The Diamondback

University of Maryland Police officer Michael Leadbeter has been stopped in the last two weeks by passersby who ask him about the small teal ribbon on his uniform.

The ribbons were originally only meant to be worn on April 2, also known as “Wear Teal Day,” a day for sexual assault prevention awareness, police spokesperson Sgt. Rosanne Hoaas said. But the officers decided instead to wear them all month, in an effort to jumpstart the conversation about sexual assault on campus.

“We want to let people know what their options are and what’s available to them,” Hoaas said. “It’s a year-long endeavor — sexual assault awareness. It’s not just the month of April.”

Brooke Taylor, a senior criminology and criminal justice major, said she has seen the police officers wearing the teal ribbons and appreciates the gesture.

“I like the support from the officers,” Taylor said. “It’s good that they are taking part in it, but I like when students put their own voices forward, we relate to that more.”

Students are doing exactly that this month, through events such as the Clothesline Project, which CARE to Stop Violence hosted Wednesday. CARE is an office in the University Health Center that provides resources and support to sexual violence survivors. At Wednesday’s event, students wrote messages on T-shirts serving as visual representations of their experiences with sexual misconduct and relationship violence.

In an effort to increase awareness of and encourage students to report misconduct, incoming students are now required to take sexual assault prevention training, based on recommendations from the Joint President/Senate Sexual Assault Prevention Task Force in April 2017.

According to an Office of Civil Rights and Sexual Misconduct report, 92 percent of incoming freshman and transfer students and 71 percent of graduate students took the 45-minute training.

Jessica Berman, a freshman enrolled in letters and sciences, said the training was helpful but should be repeated each year, as most students quickly forget the resources available to them.

“I knew about CARE, but I didn’t know about the others,” Berman said.

Like Berman, Taylor said the training should be repeated more frequently. “After the trainings, it’s not emphasized, and it should be,” she said.

The effects of the training are not yet clear, according to Reka Montfort, who served on the task force.

“It was a pretty significant undertaking that they went through,” Montfort, director of the University Senate, said. “It’s not something you snap your fingers and have happen.”

Hoaas said it’s difficult for police to see any trends in reporting because they don’t receive all reports of sexual assault on campus.

Any violation of the university’s sexual misconduct policy can be reported to police, who investigate criminal offenses and refer other violations of the policy to OCRSM. When someone reports an incident to OCRSM, police are not informed without the complainant’s permission.

About 250 reports of potential misconduct were filed with OCRSM last academic year, and 91 became formal complaints. In the same year, there were 62 Title IX-related reports to police.

Regardless of how students report misconduct, what’s more important is that students know they have resources available, Hoaas said.

“We want to do everything we possibly can to help the survivor and be there every step of the way,” she said. “But we will not let the survivor become victimized a second time. So, whatever they decide, we are with them.”