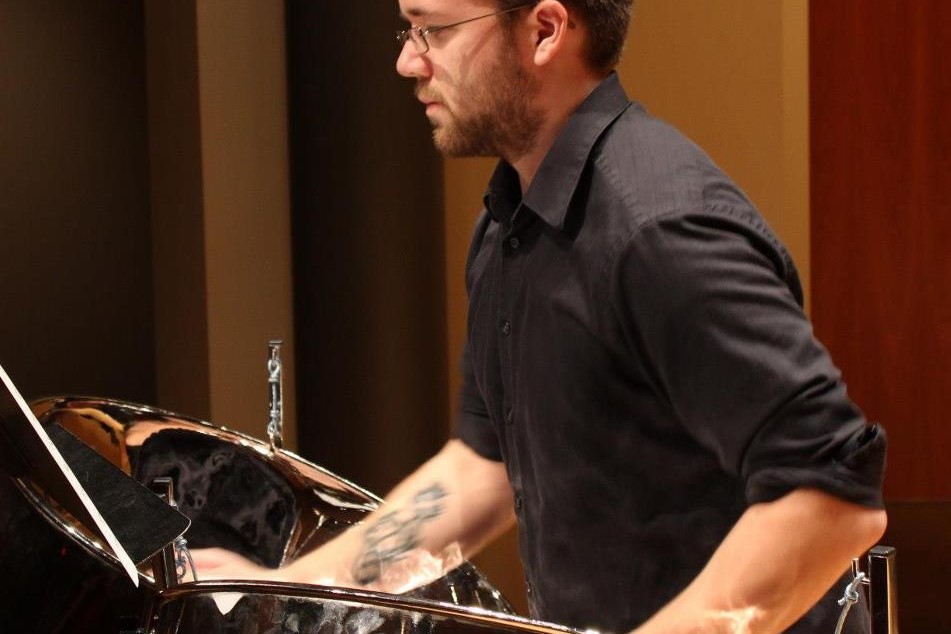 Duncan Boatright, a doctoral student in music composition, was one of the composers who had their original scores performed at the New Music at Maryland concert at The Clarice on April 10, 2019. (Photo courtesy of Duncan Boatright)

After a long night of writing music, Dominic Ellis wakes up to teach a music theory class in the University of Maryland’s music department. He then attends a three-hour dress rehearsal, where he works with student musicians to polish their performance of one of his original scores.

Ellis, a music composition master’s student, is one of several students who had their music performed at the Clarice Smith Performing Arts Center on Wednesday for New Music at Maryland, a showcase promoting student composers’ original works.

Ellis said he incorporated qualities of both instruments, along with the personalities of the performers, into his music.

“You hear a lot of call-and-response,” he said. “I imagine [the musicians] having a conversation as they would as friends.”

Gehring said the concert was a good way to bring traditional classical music into the modern era.

“Classical music is often criticized, and rightfully so, for continually being stuck in the past,” he said. “So it’s good to break out of that and accept the work of new and different composers.”

“I want to evoke all the emotions and thoughts that the composer intended,” she said.

The concert’s organizer, Thomas DeLio, a music composition professor, reached out to student composers to submit music for the show and received many applications. Four were performed on Wednesday.

DeLio said the concert was critical for student improvement.

“It is very important to see how a piece sounds in a hall in front of an audience, and [to get] a chance to see how each composer has grown since the last time we’ve heard a piece of theirs in a concert,” DeLio said. “It’s always important to help evaluate.”

Ellis said he was proud to have his work showcased, likening it to watching a child graduate from high school.

“It’s like, I made this thing. I put it out into the world,” he said. “It has a life of its own, and other people are taking care of it. It’s kind of a proud dad moment.”

Like Ellis, Duncan Boatright, a doctoral student in music composition, had his entirely electronic score performed. It took more than 200 hours to create, he said.

[Read more: ‘The Fever’ at The Clarice forced collaboration in the most artistic of ways]

For Boatright, the most important aspect of participating in the concert was gaining new listeners.

“Overall, I think most of the composers there are happy to get a little bit of exposure,” he said. “The only expectation that you have is that our music gets to other people’s ears — that’s always the main goal.”

While every other score was acoustic with instrumentation, Boatright simply played his piece on an empty stage in total darkness.

“It is the direction that a lot of composers are drifting toward, this electronic work,” he said. “For a long time, there was this concept of the composer-performer. To be a composer, you had to be a virtuous performer as well. These days, the new moniker is the composer-programmer.”

The audience response ranged from shock to admiration when Boatright’s electronic piece was played.

“Seeing the transition of a full stage to a dark, empty one was strange, but it was really interesting and it felt very modern,” freshman kinesiology major Stefanie McBeth said.

Boatright said he expected the audience to be surprised when hearing his work because much of the music composed in the music department is “a little bit out of left field for some people.”

“Our goal is to be adventurous and to introduce something new,” he said.