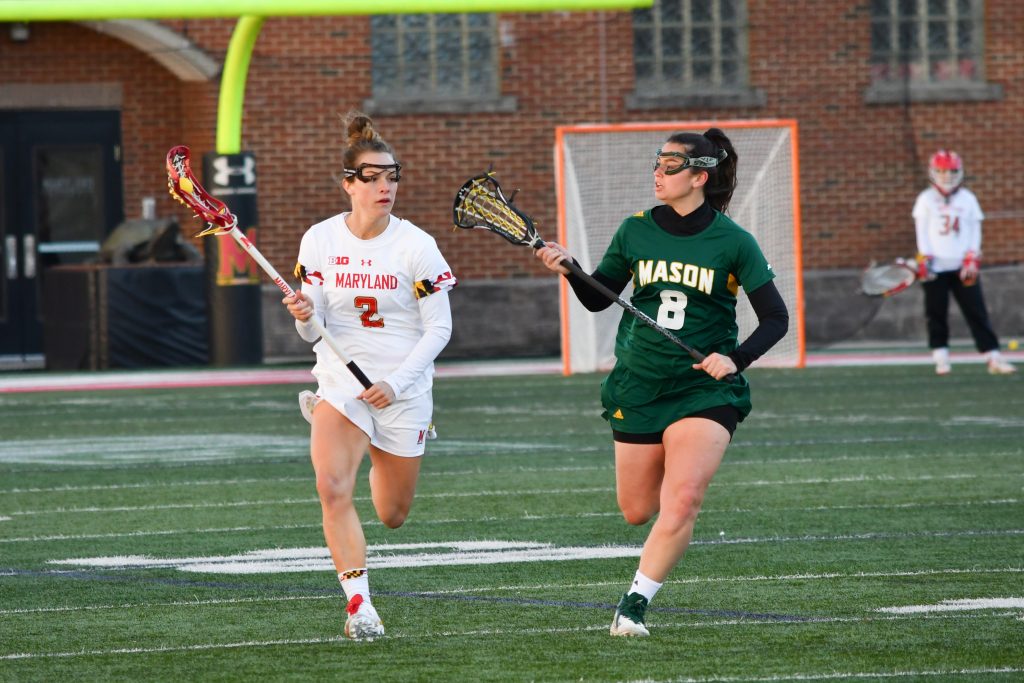 Early in Maryland women’s lacrosse’s Saturday matchup with Michigan, the Terps defense quickly rebounded after allowing a Wolverines goal in the opening minute.

Attacker Lilly Grass tried to go to work on defender Shelby Mercer, cutting around the cage in an attempt to create a look on goal. Mercer wasn’t fooled, swiping the ball out of Grass’ stick and securing possession for Maryland.

The Terps have rarely had to play from behind, and the defensive stop was one of four forced turnovers caused by the home squad before it evened the score — and eventually pulled away for a 14-3 win.

Mercer’s work in the one-on-one matchup was indicative of another stifling defensive effort, as she quietly continues to make her presence felt on Maryland’s suffocating unit — one that will be tested to its limit Thursday against Northwestern’s top-ranked scoring offense.

“[Mercer] is phenomenal. Sometimes defenders don’t get a ton of love, but she’s such a good one-on-one defender,” coach Cathy Reese said.

After conceding nearly 9.9 goals per game last year, the Maryland defense has worked to bring that number down to 6.4. Since the unit remains largely unchanged from 2018, the Terps have tapped into the luxury of experience to build a formidable defense that has shut down some of the nation’s best offenses.

Goalkeeper Megan Taylor and defenders Julia Braig and Meghan Doherty have started almost every game they’ve been healthy for since arriving in College Park. All three came to Maryland as highly touted recruits, and each was given opportunities to immediately showcase their talent.

Meanwhile, Mercer and defender Lizzie Colson have come into the fold more recently. In that duo, Reese has found two complementary pieces that take the defense to an elite level.

“They communicate great, and that’s why they have so much success on the defensive end,” attacker Kali Hartshorn said.

Mercer came into Maryland in the shadow of her older sister, Alice, in 2016. A star defender and three-time All-American, Alice’s success made it difficult for Shelby to find a spot in the lineup.

But now, in her final season in College Park, Shelby has finally carved out her own identity.

“[Alice] being out a few years has given me a chance to settle into my own role,” Shelby said.

Facing competition from a squad loaded with defensive talent throughout her Maryland career, Mercer didn’t start a game until this year’s opener against George Mason. She made an impact immediately — although not where it was expected.

Just over four minutes into the game, Mercer initiated a fast break and floated a long pass downfield to Hartshorn. Hartshorn raced downfield and comfortably finished the one-on-one. Mercer collected her first and only career assist on the play, and settled in from there.

Mercer has established herself as one of the Terps’ best one-on-one defenders in their man-to-man scheme. Due to her quickness and agility, Mercer has shut down some of the better offensive talents in the country.

“She’s a key matchup person for us,” Reese said. “That’s somebody we’re looking to put on one of the other team’s attackers that drives to goal.”

She showed that ability on Saturday when she shut out Grass, who’s tied for Michigan’s lead in points. She’ll have to find similar success against Northwestern’s potent offense Thursday if the Terps are to maintain their perfect record.

Luckily for Mercer, it won’t all be up to her. Maryland has countless individual pieces capable of shutting down elite attackers as one of the best team defenses in the country. The Terps’ composure will be tested against the Wildcats, who lead the nation with 19 goals per game.

While it will undoubtedly require a team effort, individual performances from Mercer and company could go a long way in securing a vital road win for Maryland.

“It’s not any one of us to defend their team,” Reese said. “It’s got to be us collectively to limit their opportunities that we give them and hopefully we can come up with some stops.”