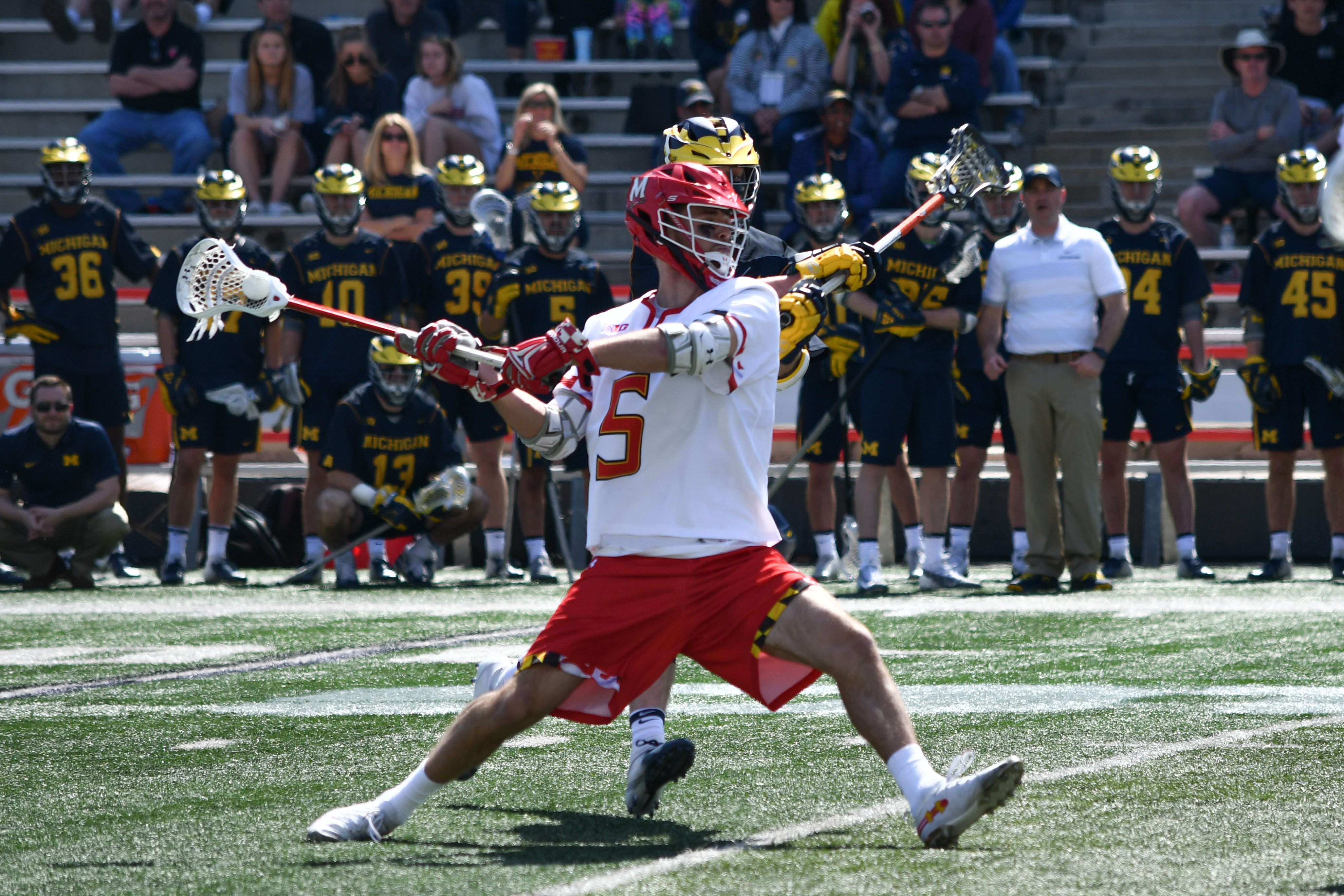 Midfielder Will Snider reaches back to pass the ball upfield during Maryland’s 16-12 win over Michigan at Maryland Stadium on April 6, 2019. (Alex Chen/The Diamondback)

In the midst of a 1-for-19 shooting slump his first five games this year, Maryland men’s lacrosse midfielder Will Snider took it upon himself to solve his low success rate.

He stayed after practice and broke down his mechanics on film, looking to break out of a mire to begin his 2019 campaign. With shooting repetition after practice and increased scrutiny of his shot, Snider bucked his slow start to the season.

He notched a hat trick against Notre Dame and got on the scoresheet in four of the last five games, emerging as a reliable option for the Terps.

“Early on, there were some things we felt like we could help Will with,” coach John Tillman said. “Obviously he was a little slow out of the gate, and I give him a lot of credit. He just stuck with it, stayed after, really dedicated himself.”

Snider emerged at the end of last season. He scored all seven of his goals after mid-March, and started the final 10 games of the season. Given his late bloom, his teammates and coaches would rely on him as a goal-scorer going into 2019.

Snider, as he did in the beginning of his junior year, took time to heat up. He went scoreless in the first three games despite taking 12 shots. But as a senior — and a regular starter — his drought was more apparent.

Despite the slow start, his teammates said their confidence in him never wavered. They had seen how lethal he could be as a perimeter scoring threat, especially in last season’s triple-overtime win over Johns Hopkins, when Snider delivered the powerful shot from the wing for the game-winner.

In those first five games, Snider fired 19 shots, nine of which were on goal. When looking at film, the team noticed Snider could make an adjustment with his shot placement.

“[Tillman] also helped me learn to be more of an artist when I shoot,” Snider said. “If I shoot one low, maybe shoot the next one high, and kind of mix up my shots. I think that’s helped me a lot, because in the past I kind of got scouted as a guy that didn’t mix his shots up well.”

When Snider broke out of his rut against Notre Dame with a three-goal showing — all of which came in the third quarter — he showed his full array of shots. He scored on a shot to the far side of the net from the wing, scored again from the wing on a shot that hit the near side of the cage, then bounced in a shot from the top of the arc to reach his career high.

Coaches and players noticed the work Snider put in after practice, repeatedly shooting on net to get his rhythm back. They encouraged him to stay aggressive and saw his countless attempts in training. And now, they’ve seen five of the last six opponents feel the payoff of Snider’s extra work.

“You just tell him to keep shooting. They’re gonna fall,” Wisnauskas said. “He did his own part … he’d shoot everyday, and you guys are seeing the results.”