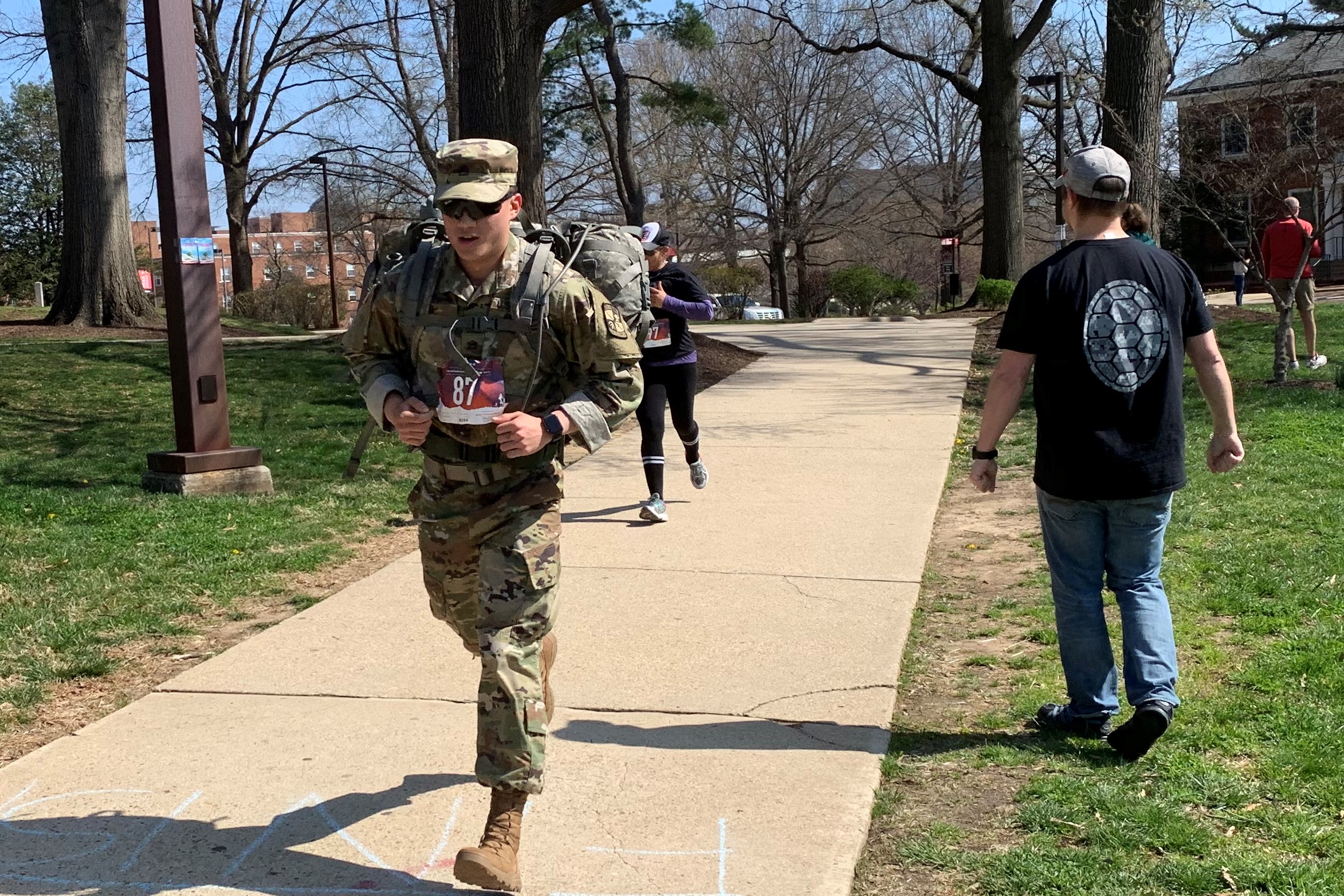 Junior mechanical engineering major Allan Li was the fourth rucker to cross the finish line during the 5K Ruck and Run event on Saturday April 6, 2019 in College Park, Md. (Photo by Tyler McBrearty/For The Diamondback)

By Tyler McBrearty
For The Diamondback

Dressed in full military fatigues, with a 45-pound rucksack on his back, Allan Li trekked across the University of Maryland campus Saturday to raise money for wounded warriors.

Li was one of 112 participants in the first annual 5K Ruck & Run, a fundraiser for the University of Maryland’s Semper Fi Fund. The race was hosted by Terps for Service Members, a student organization dedicated to helping military members and their families.

An estimated $5,000 was raised, all of which will go to the Semper Fi Fund, said Nina Conkright, vice president of finance for Terps for Service Members.

“The Semper Fi Fund is a really great organization that works toward helping catastrophically wounded or injured veterans and their families,” said Conkright, an environmental science and technology major. “It is an organization where most of the money they receive actually goes straight to the people that they are trying to benefit.”

Runners could decide to run with or without weighted backpacks. Li finished fourth in the ruckers group.

“I’m always pushing myself and a little extra challenge, I’m not afraid of that,” said Li, a junior mechanical engineering major. “Seeing all of these people on a Saturday morning, that’s very motivating for me.”

The group had planned the event for two years since Terps for Service Members was founded by Priya Shukla, a senior physiology and neurobiology major, during the fall 2017 semester. The group hopes to make the race into an annual event, Shukla said.

Veterans, students and people supporting what they considered a good cause came from as far as Frederick and Baltimore to attend the race.

“5Ks are a lot of fun,” said Eric Cortellessa, 28, of Washington, D.C. “It’s a great opportunity to raise awareness … or raise money for a certain cause.”

Junior bioengineering major Zachary Keepers said he is grateful for the opportunity to participate in an event that would benefit a good cause like the Semper Fi Fund.

“I think a chance to honor military veterans is great and to be able to be like I’m here to support you guys,” Keepers said.

Junior animal science major Blair Arriola and junior mechanical engineering major Logan Dill both participated in the event in part because of their connections to the military.

“Both of our dads are in the military, so I thought it would be a cool race to do together,” Arriola said.