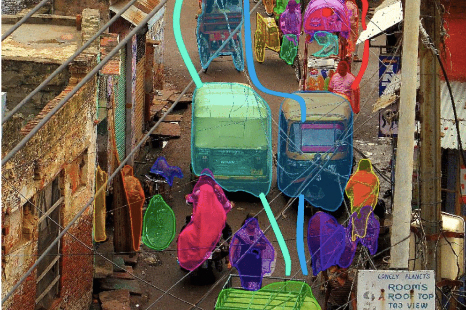 Fully autonomous vehicles may be a long way from hitting the road, but research from a University of Maryland professor could bring the industry one step closer to that ultimate goal.

Computer science professor Dinesh Manocha worked with scientists from an artificial intelligence research institute in Beijing to build a simulator that can teach autonomous cars how to respond to challenging driving scenarios, such as those involving other cars, buses, bicycles and pedestrians.

This system, which was presented in a paper published March 27 as the augmented autonomous driving simulation, is the first of its kind to use real road data and scenarios to train self-driving cars, Manocha said. Similar systems created in the past have used entirely simulated scenarios, rather than ones drawn from authentic situations.

“Past research was purely synthetic and not realistic enough,” Manocha said. “We used real-world imagery and videos to try to … replicate similar rendering and behavior and extract and encode the behaviors and generate new scenarios based on the real-world data.”

In College Park, Manocha said drivers may encounter buses making frequent stops and students crossing the road without looking both ways. These are the situations that Manocha hopes AADS will help prepare autonomous vehicles for.

Teaching autonomous vehicles what to do in challenging driving situations requires hundreds of millions of miles of road testing, which Manocha said is often not feasible.

“Road testing is difficult,” Manocha said. “What are the chances we’ll encounter a difficult situation?”

The simulation aims to train self-driving cars by running millions of driving simulations, based on real situations filmed in India and China, through the vehicles’ computers.

In these simulations, the cars will be confronted with tough road situations and make decisions to mitigate the danger. From that reaction and the repercussions, the car’s computer learns and adapts for future trips.

This is a type of machine learning called reinforcement learning, said Uttaran Bhattacharya, a computer science doctoral student who works with Manocha on other autonomous driving research.

“You just put the agent in that environment in which you want it to learn and it reacts in the environment and based on the feedback it gets, it learns,” Bhattacharya said.

Manocha said this paper is simply a proof-of-concept study — a similar system could be successfully used to train autonomous vehicles, but has not yet been adopted by companies to use while developing self-driving cars.

“We published this openly to hope that other companies will also incorporate similar ideas,” Manocha said.

While Manocha and Rohan Chandra — another of the professor’s advisees — said fully autonomous vehicles won’t be ready to sell on the market for a long time, the development of the stimulation is a big step in that direction.

“We’re hoping that we can have an agent drive in the most challenging scenarios possible that can help break in to the highest levels of autonomous driving possible,” said Chandra, a computer science doctoral student.

The fact that a lot of the data used to develop the simulation was captured in India made the research all the more personal for Chandra, an international student from the country. Through transmitting video of tough driving situations on Indian roads to autonomous vehicles, the simulation will help teach self-driving cars how to make the kinds of decisions human drivers on those roads have to make.

“We want to translate the real world experience into the research we’re doing,” Chandra said.