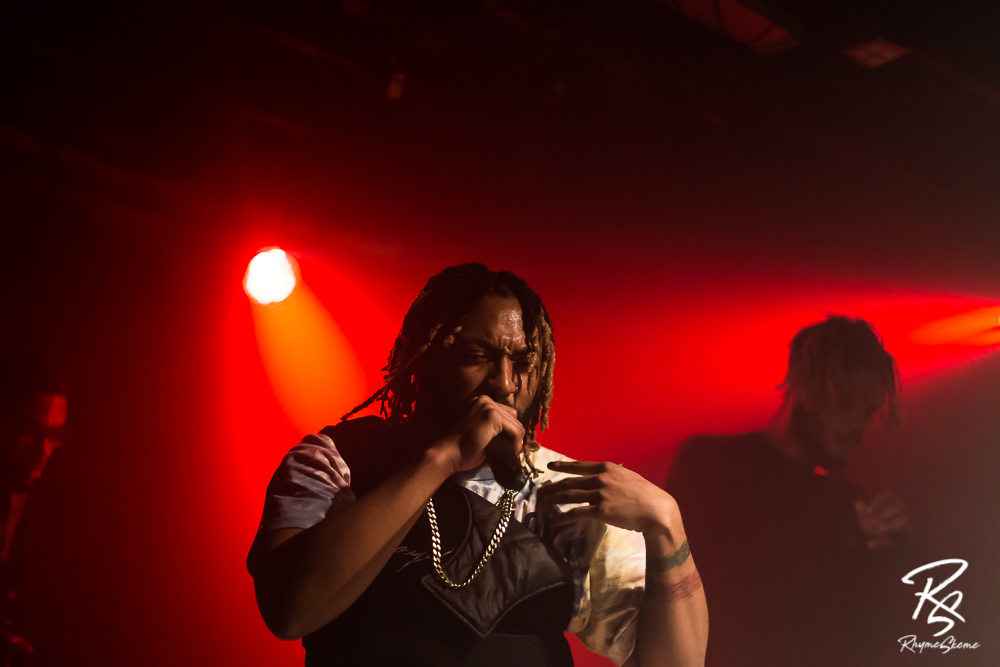 Bare-chested, only wearing a pair of large, half-yellow-half-blue plastic-like pants, rapper Live Yatta jumped, danced and swung his purple hair around, performing his heart out at SXSW this year — just a few days after he had class at the University of Maryland.

A junior family science major, Yatta — also known as Kenyatta Bellamy — has a lot on his plate. The 21-year-old is a full-time student, part-time Nando’s employee and full-time musician. Sometimes it can be hard to handle, but with his energy and passion for making music, Yatta manages.

“I started [music] in high school. As a joke, it was probably sophomore year of high school, I took a picture and I had my hands in a prayer position and called it ‘Live Love Yatta,’” he said.

Yatta started making music in high school with clean, non-explicit music because he was afraid his mom would find his music. After he got to college, had some experience under his belt and bought some studio equipment, Yatta released part one of his first EP, Long Live, in 2017.

Looking back at his first EP, Yatta said it was more of a trial run, and he’s learned a lot since then about how to mix and write music.

[Read more: A$AP Ferg, Jessie Reyez and THEY. are coming to UMD for Art Attack 36]

Before getting into rap, Yatta said he used to be a “rock nerd.” Rock bands taught Yatta how to be himself and make the music he wants to make. Now, a lot of his rap is infused with rock elements like guitar, Yatta said.

“Inspiration from my music comes from a lot of my experiences and observations through life, all the things I’ve been able to go through, being a military brat, going through relationships, friendships, heartbreak, meeting new people, traveling… all of these things people don’t rap about,” Yatta said.

The main reason he began to make music is because he was tired of music that sounded the same. He wanted to make something that he would want to hear.

Yatta performed this year at South by Southwest SXSW music festival in Austin, Texas. He said it was a “blessing and a curse” because he didn’t get as good of a turnout as expected, but it was still a good experience to make connections and perform. Next year, Yatta hopes to bring more DMV artists with him to the Lone Star State.

On his Instagram, Yatta posted videos of his performance at SXSW. You can really see the type of energy he brings  — jumping, shouting, raging, dancing and flipping his colorful hair around. Even if the audience isn’t super energetic, Yatta said he’s not afraid to get crazy on stage.

This energy is channeled into his art. Graphic designer Charlie Hatcher has been working with Yatta since 2017 when they first got together to make an album cover. Like Yatta and his music, Hatcher’s art is bright and loud — meant to capture the attention of the viewer.

“I just like to be really bold with my artwork. I’m a big fan of color. I like to be bright and include a lot of contrast because I like art to stand out. Whether it has a strong message or not, I like the artwork to pop,” Hatcher said.

On top of everything else, Yatta is also the owner of a record label, Long Live Records. He has two other rappers on the label with him. A few of his friends and other DMV artists are featured on his latest EP, Live Yatta and Friends. Released on Friday, the EP doesn’t have a “theme,” but is more of a collection of songs he recorded with his friends.

“We sit here and cook up music in my attic with all these lights and posters and just get to it,” Yatta said.

When asked about the future, Yatta said he hopes to follow all of his passions. He’s been an English TA. He’s worked in marketing at Nando’s and at the Fillmore. He’s worked in health and administration and also enjoys being a student. In five years, Yatta said he can see himself following all of these interests.

CORRECTION: Due to a reporting error, a previous version of this story incorrectly stated that Yatta is 22 years old. He is 21. This story has been updated.