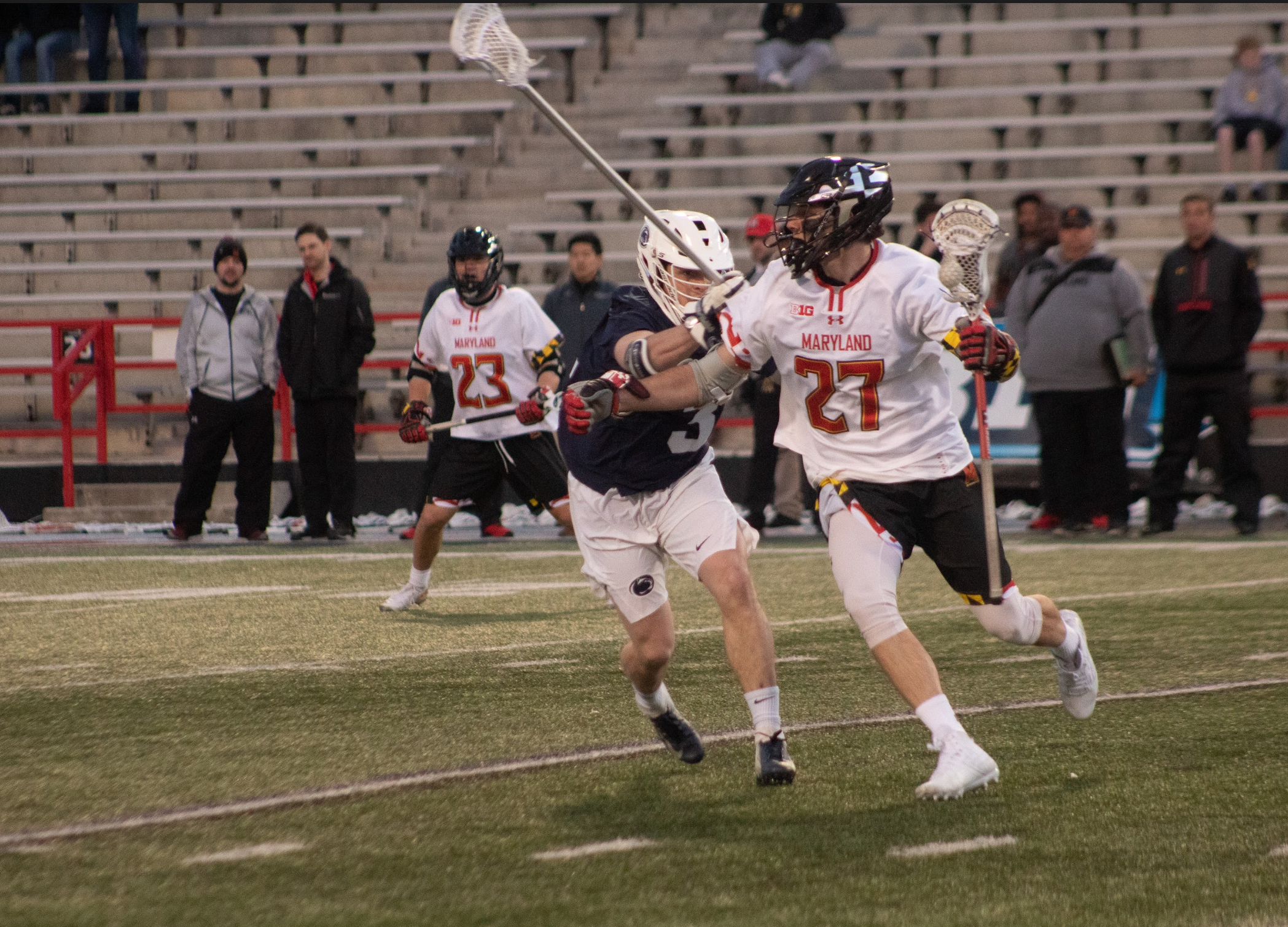 By the end of the first quarter, long before No. 3 Maryland men’s lacrosse managed to mount a comeback, coach John Tillman’s team gathered along the sideline searching for much-needed answers to the 8-1 hole it found itself in.

No. 1 Penn State dominated the opening 15 minutes on both sides of the field, scoring at will and limiting the Terps’ attack to one goal in an overwhelming first-quarter display.

During a season full of bright moments, the first quarter was a rare blemish on both sides of the ball for Maryland, as the team watched the Nittany Lions separate themselves with an offensive outburst and a shutdown defensive effort that proved the difference Sunday.

“We certainly would not have sketched that one out like that,” Penn State coach Jeff Tambroni said of the first quarter. “It was very fortunate to get out the way we did, because we knew we needed every single one of them against a team like this.”

Penn State began the game’s scoring on its first possession, and Maryland quickly answered three minutes into the game.

But the Nittany Lions didn’t allow that to disrupt the confidence Tambroni said they’d built up throughout the week of practice. Penn State rattled off seven straight goals behind the multitude of scoring threats in its top-ranked offense.

Attackmen Jack Traynor and Mac O’Keefe and midfielder Jack Kelly each scored two goals in Penn State’s first-quarter barrage. O’Keefe and attackman Grant Ament — who was questionable ahead of the game — each dished out two assists, helping to facilitate the Nittany Lions’ explosive quarter.

“They got parts all over the field, from Ament all the way down to the second [midfield] line. All those guys can ball,” midfielder Roman Puglise said. “It’s a credit to them. I think they just came out fast and they didn’t slow down.”

Penn State’s offense entered the game drawing headlines with its 18.4 goals per game, and it showed out early in Sunday’s win, which was the first time Maryland surrendered eight goals or more in a quarter since 2004.

But the team’s defense backed up the scoring, providing an equally dominant first quarter as it prevented the clean looks Maryland’s attack has created all year.

The early Penn State dominance aligned with a season-long trend, in which the Nittany Lions had outscored opponents 49-19 in the opening quarter before Sunday’s game. Those fast starts have often opened up insurmountable leads.

Penn State — which had lost 36 straight games against Maryland before Sunday — emphasized the importance of starting fast to buck that trend. And the one-sided first quarter helped push the Nittany Lions to the 13-10 win over the Terps.

“Trying to accomplish something that you have never seen before takes a lot of courage,” Tambroni said. “So that was important for us. I think that gave us a real spike of not just enthusiasm, but confidence.”

After falling behind in the first quarter, Maryland rallied back and outscored Penn State 9-5 in the final three periods.

But in the end, Maryland’s comeback fell short, as Penn State’s decisive first quarter was too much to overcome in its Big Ten opener.

“It’s definitely progress from the first quarter through the rest of it. We can look at the film tomorrow and the rest of the week, and we’ll get better from it,” Puglise said. “We have an expectation and we didn’t live up to it.”