Maryland women’s basketball had success despite inconsistency, but came up short in March 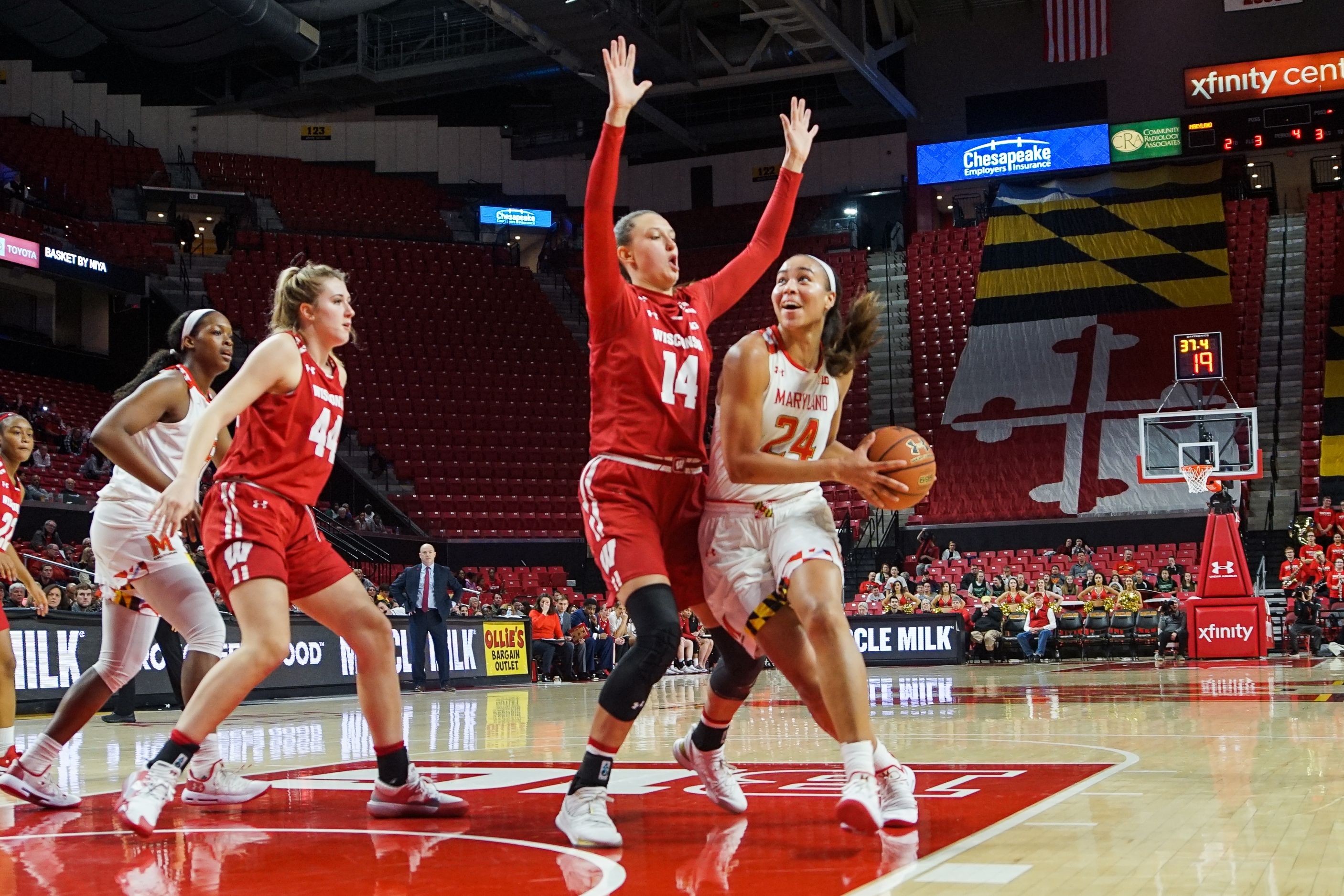 Last season, when the Maryland women’s basketball season ended with a second-round loss to NC State, there was little reason for dismay. The Terps had entered the year with an unproven roster, had come up short of the Big Ten regular-season and tournament titles and earned their lowest seed in the NCAA tournament since 2011.

But expectations returned to Maryland’s lofty standard for the 2018-19 campaign. And a season-ending 85-80 loss to UCLA in the second round Monday left the program with a sour taste in its mouth.

A promising, often scintillating showing against the Bruins was whitewashed by a bevy of vital errors, ending a season that was equally as inconsistent. At times, Maryland was unstoppable on offense and offered little resistance on the other end. Others, it crawled through horrid shooting with a stout defense front. Nearly every game included at least one throwaway quarter.

Maryland battled to a 29-5 record and repossessed the Big Ten regular-season crown, but the uneven performance against UCLA was the final nail in the coffin for a squad that never fully clicked.

“We have nine of us coming back next year,” guard Kaila Charles said. “We’re going to use this as motivation in the [offseason] to get better, and hopefully have a better season and go as far as we can.”

Returning so much of her roster is a luxury that coach Brenda Frese hasn’t enjoyed in recent years, which helps explain the program’s modest downturn in recent seasons. The Terps were decimated by transfers two years ago, and had only 10 players on the roster for this campaign.

But Frese said a lack of depth is part of why, after a 26-3 regular season, the team didn’t find postseason success.

Maryland gave up a season-high 90 points to Iowa in its conference tournament championship loss, and the early NCAA tournament exit featured the squad’s worst rebounding performance in over a decade — the Bruins collected an eye-popping 27 offensive rebounds to overcome 36.3 percent shooting.

The Terps didn’t lack top-end talent. Led by Charles, they returned four starters from a 26-win squad and welcomed a top-five recruiting class headlined by guard Taylor Mikesell and forward Shakira Austin. Frese’s team entered the season ranked No. 9 in the AP poll.

By emphatically beating then-No. 10 South Carolina on the road and taking care of business against the Big Ten’s lesser teams, the Terps remained in the top 10 for all but two weeks.

“I can’t say enough of how proud I am of this group,” Frese said. “To be able to get to 29 wins, a Big Ten regular-season title and everything they have accomplished this season.”

Despite periods of inconsistency during conference play, Maryland ended the regular season winning 11 of 12 games to finish 15-3 in the Big Ten and secure a fourth conference title in five seasons.

“I told this group, it’s one of the best groups I’ve ever coached,” Frese said. “With their chemistry, how they played for each other all season long.”

With so many key pieces returning next year, that chemistry can be expected to grow.

Maryland loses only forward Brianna Fraser to graduation, returns 90.7 percent of its scoring and brings in a quartet of five-star recruits, including McDonald’s All-American guards Ashley Owusu and Diamond Miller. The class is ranked No. 3 by ESPN and will give Frese a full roster for the first time since the 2017 exodus.

“I won’t know what to do with myself,” Frese said. “That was a byproduct of a two-year hit when you have kids transfer out.”

The Terps are slated to have five seniors next year, led by Charles and forward Stephanie Jones, who averaged 17.0 and 12.8 points this season, respectively. After having a taste of the Sweet 16 in their freshman campaign, they will be determined to return the program back to those heights and beyond during their final year.

But the most important factor in the Terps’ 2019-20 campaign may be the maturation of Mikesell and Austin, who both displayed flashes of brilliance in record-setting seasons before ending it trending in opposite trajectories.

Austin shattered the program block record with 89 rejections, but she struggled to handle the physicality of the Big Ten, and her numbers dipped accordingly. A 15-point, 10-rebound and six-block outing against the Bruins, though, is reason for confidence going forward.

“I definitely had a lump at the beginning of the conference with the physicality change,” Austin said on March 2. “It just took a lot of growth for me and a lot of my teammates told me to keep attacking, keep my confidence up and finish it through.”

Mikesell, meanwhile, was named the Big Ten Freshman of the Year for a season in which she broke Kristi Toliver’s mark for triples in a season with 95. But she shot just 29 percent from behind the arc in Maryland’s five tournament games, possibly a sign of fatigue after logging a team-high 1,180 minutes.

“Bodes well for the future for Shakira and Taylor,” Frese said. “The future is extremely bright.”

As her players jogged off the court and into the Xfinity Center locker room for the final time Monday, Frese took one last glance at UCLA as the underdog visitors celebrated its fourth Sweet 16 appearance in a row.

By exiting both postseason tournaments empty-handed, the up-and-down season had fallen short of the lofty expectations Frese set at Media Day in November.

But while Frese surveyed the exuberant scene on the other side, her squad appeared ready to move on, viewing the defeat that kicked off the midcourt mob as a valuable teaching moment entering next year.

“In the tournament in March,” Charles said, “teams are going to be playing their best basketball because they don’t want to end their season. There’s a lot of lessons learned, but I’m still proud of my teammates.”