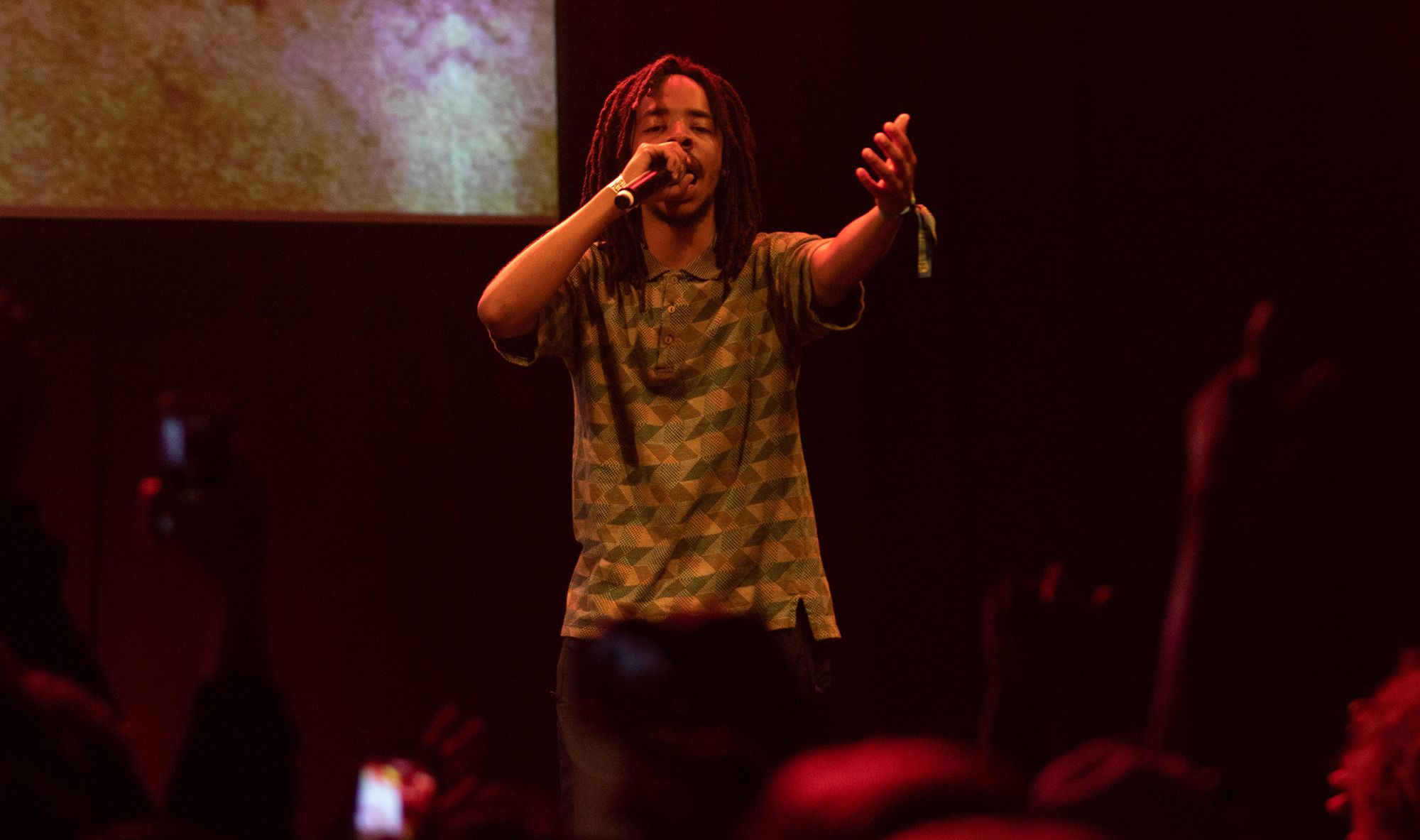 Earl Sweatshirt at The Fillmore on March 27, 2019. (Julia Nikhinson/The Diamondback)

Earl Sweatshirt is really good at rapping. Like, really good. Anyone who listened to Some Rap Songs — the 2018 hip-hop album of the year — knows that, but seeing him rap live at the Fillmore Silver Spring on Tuesday really just hammered that point home.

At the age of 16, Earl entered the rap game with a mixtape of the same name that attracted an “incel” fanbase that the now-25-year-old rapper has since tried to distance himself from. I’m not sure he’s been entirely successful; there were a lot of teenage boys wearing Odd Future merchandise in the crowd and someone in a The Money Store t-shirt was watching Anthony Fantano videos on his phone next to me before the show started. But Earl still put on the most punctual rap concert I’ve ever been to.

Earl came out right on time at 9:30 p.m. to “Molasses” off his debut album Doris, and people were reciting every lyric with him, word for word, in a way that only people who’ve been listening to the song since before they hit puberty can. I’m sure he says it at every concert, but when he congratulated the crowd for being able to rap along so well, it really felt like he was impressed with how everyone did. He said he was feeling the crowd’s energy so much he was just going to rap for an hour straight.

The crowd wasn’t just there for Earl, either. Longtime Odd Future collaborator and friend Na-kel Smith took the stage at 8 p.m. on the dot. Much to my surprise, a lot of people knew most of the words to the songs he played. Even Na-kel himself seemed genuinely surprised and happy the crowd was so hyped for his performance. He even got in the audience and moshed with everyone for one song to show his appreciation.

[Read more: Why you should stop buying and wearing Supreme]

BbyMutha came on at 8:40 p.m., just as scheduled. The Tennessee rapper had a lot less fans in the crowd than Na-kel, but the guy standing behind me rapping along to “BBC,” emphatically shouting “Acting like a child, I got four of those/ I’m not tryna keep up competition with you silly hoes,” was an early highlight of the night for me.

Earl was absolutely glued to the beat and didn’t miss a single word, not even an ad-lib, in any of his songs. I’m not even sure if he had a backing track — it sounded like his studio recordings, only better. The only time he wasn’t rapping he was joking with the crowd, telling us to keep hydrated or asking if we remembered Big Sean’s ad-libs.

Hearing the energy with which he delivered lines like “Why ain’t nobody tell me I was bleedin’?/ Please, nobody pinch me out this dream” live was like listening to “Shattered Dreams” for the first time and realizing how deep the MIKE and Navy Blue influences were running on Earl’s new work.

The most memorable part of the night was when Na-kel came back on stage with Earl to perform “DNA.” Na-kel’s verse was written and performed when he was on acid and just learned one of his close friends died, and you could hear it in his voice. They held a moment of silence after his verse and had the crowd think of their loved ones who had passed.

Then he stopped performing at 10:30 p.m., one hour after he said he was going to rap on stage for an hour. If that’s not a sign of a rapper who’s matured, what is?