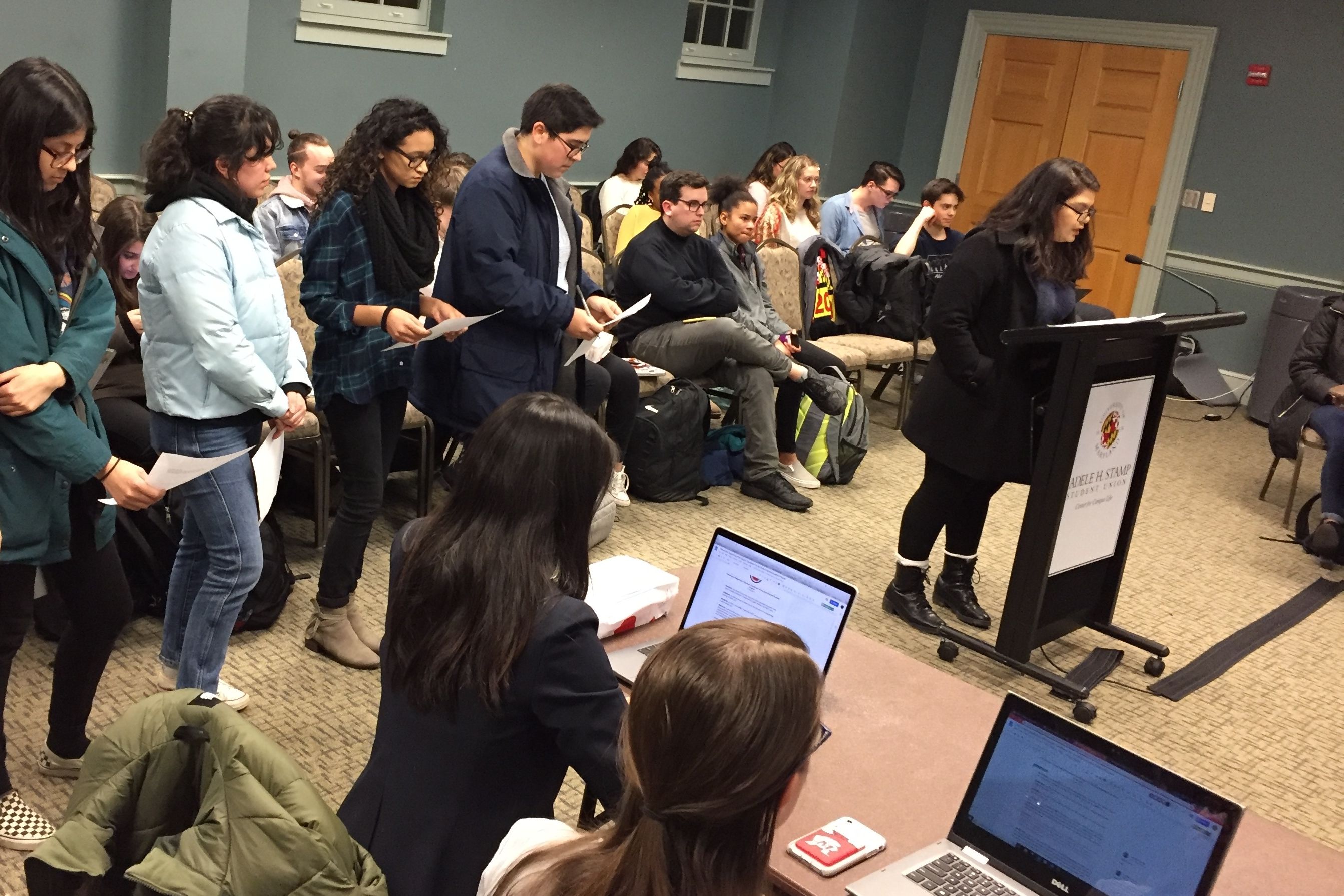 Political Latinxs United for Movement and Action in Society President Blanca Arriola Palma speaks at a March 6 SGA meeting while other PLUMAS members wait to present their arguments for the bill. (Morgan Politzer/For The Diamondback)

As the national debate over immigration rages on, the University of Maryland must continue to ensure that all students succeed, including undocumented students who have applied and been accepted as part of the Terp family. The best way to ensure that students dealing with uncertainty related to their immigration status flourish is permanent institutionalized support.

In fall 2016, ProtectUMD, a student organization coalition that included Political Latinxs United for Movement and Action in Society, successfully advocated for a “full-time Undocumented Student Coordinator to advocate for, advise, represent, and protect undocumented and DACAmented students.” However, the position is temporary, and its future is not secured.

The undocumented student coordinator takes on many responsibilities to support both students and the larger university community. The coordinator is knowledgeable about the unique circumstances undocumented and immigrant students face and provides them with resources to help overcome financial insecurity, academic uncertainty and the stresses to mental health that come with the uncertainty of our immigration system. Through initiatives such as monthly breakfasts and the UndocuTerps Immigrant student welcome, students have been able to build a community that supports their academic and professional journeys at this university.

The undocumented student coordinator provides institutional and staff support. They’re in charge of developing and leading UndocuTerp trainings for students, staff and faculty, as well as student groups. The coordinator serves as a point of contact for advice about including undocumented and immigrant members of the university in campuswide efforts, such as Terps Vote’s push for civic engagement and this university’s “Year of Immigration.” In addition, they are an expert on changing immigration policies, notifying departments and administrators of new developments as they arise.

The undocumented student coordinator is a vital resource and advocate for the undocumented and larger immigrant communities on campus, and the position should be given permanent housing and funding to serve current and future students.

Candela Cerpa, the Student Government Association’s behavioral and social sciences representative, introduced an SGA resolution earlier this month on behalf of PLUMAS in support of the undocumented student coordinator becoming a regular permanent position. It passed with a vote of 34-0 and one abstention. We received and presented testimonies from undocumented students and academic programs, such as Asian American Studies and the Center for Global Migration Studies. These diverse campus constituencies understand that a permanent resource for undocumented and immigrant students is critical to their success.

University President Wallace Loh recently expressed his support for the Dream and Promise Act, a bill that would create a path to citizenship for immigrants without legal status who came to the U.S. as young children and Temporary Protected Status holders. But given the political dynamics in Washington, D.C., the future of the bill is uncertain. Making the undocumented student coordinator position permanent is a tangible, immediate step that Loh and university administrators can take to help students, beyond issuing statements of support.

As university students, we will do all we can to help administrators identify a permanent institutional home for a staff member dedicated to supporting and advocating for UndocuTerps and immigrant communities on campus. We ask administrators in the Office of Diversity and Inclusion, Division of Student Affairs, Office of Undergraduate Studies and the Office of the Provost to take action and make the undocumented student coordinator position permanent.

We cannot allow administrative bureaucracy and leadership change to delay tangible support for students. A permanent resource for undocumented and immigrant students is a matter of necessity and equity. We ask you to do your job in supporting the success of all Terps.

Blanca Arriola Palma is the president of PLUMAS and a senior government and politics major. She can be reached at palmablancaa@gmail.com.

Candela Cerpa is the vice president of external affairs for PLUMAS and a junior environmental science and policy major. She can be reached at ccerpa@terpmail.umd.edu.