No. 4 Maryland men’s lacrosse rides big first half to 16-9 win over No. 19 North Carolina 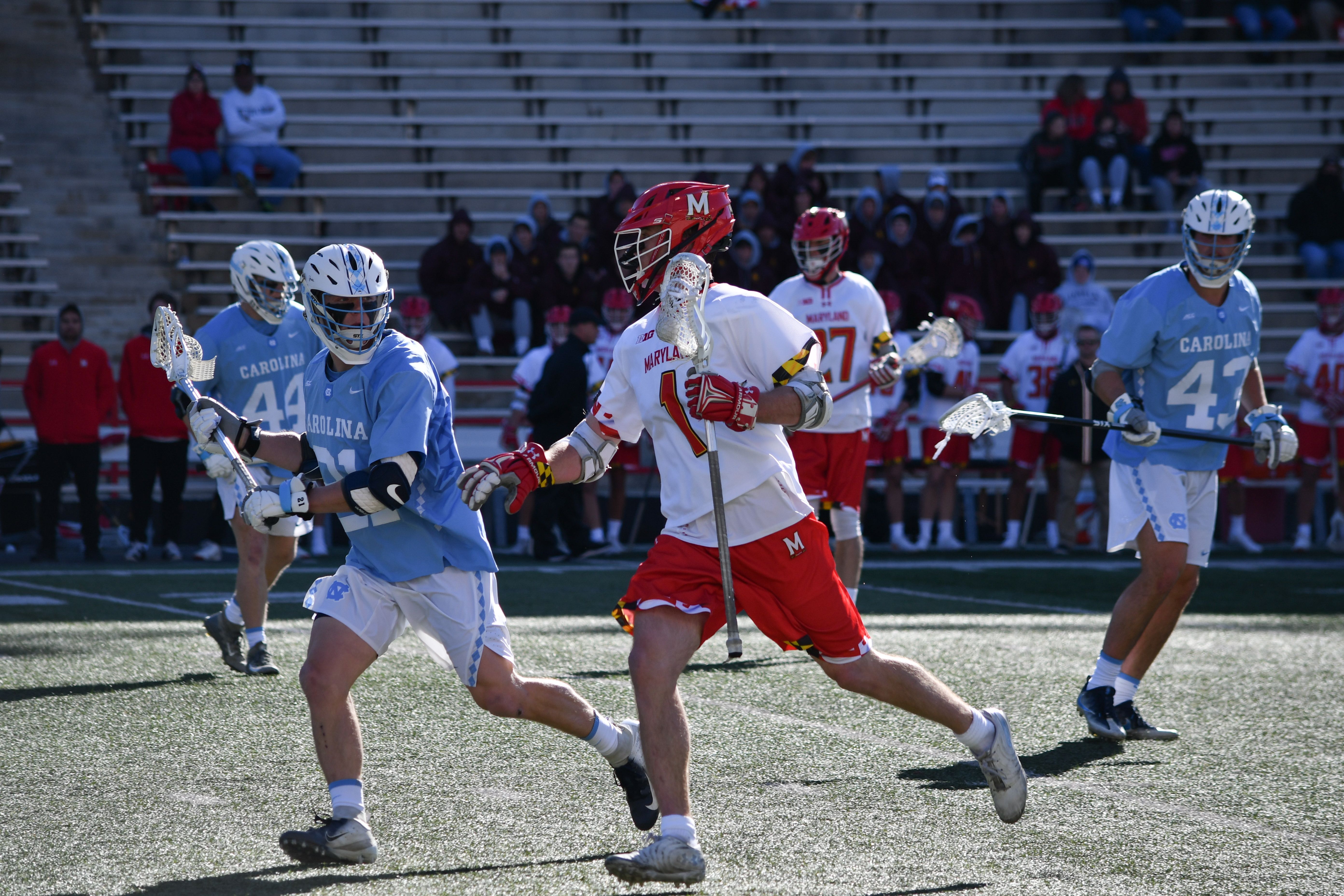 Attackman Jared Bernhardt pushes against North Carolina in Maryland's 16-9 win over the Tar Heels at Maryland Stadium on March 23, 2019. (Alex Chen / The Diamondback)

The Maryland men’s lacrosse attack surveyed the North Carolina defense before being forced to pass and look for an alternative opportunity early in the first period. As the ball was transferred from stick to stick, the shot clock wound down with the Tar Heels’ tireless defense pressing on.

With the clock under two seconds, midfielder Anthony DeMaio wrapped up to the wing and fired a shot past North Carolina goalie Alex Bassil for the Terps’ first goal of the evening.

DeMaio’s goal helped Maryland unlock North Carolina’s stingy defense and unleash a first-half scoring flurry in the No. 4 Terp’s 16-9 win over the No. 19 Tar Heels on Saturday at Maryland Stadium.

“It was like, ‘Guys just take a deep breath, just realize it’s going to take a little time. Move the ball,’” coach John Tillman said. “When the guys moved the ball, it was actually great to watch. It was beautiful offense.”

North Carolina’s physical brand of defense gave Maryland issues early in the game, as the Terps’ shooters couldn’t get their hands free for shots and struggled to find openings.

Maryland had prepared for that style of defense during the week leading up to the game with their scouting report and subsequent looks against the scout team. But it took the team some time to get adjusted to it at game speed.

“We kind of knew going in, but the first quarter we weren’t getting anything going,” attackman Logan Wisnauskas said. “We could see like, ‘Wow, the scout was right.’ They’re getting to our hands, they’re checking hard [and] they’re being physical.”

But it was DeMaio’s late-clock score that got the Terps on the board to answer North Carolina midfielder Timmy Kelly’s initial strike.

DeMaio racked up three goals, his first career hat trick, in the first quarter, scoring twice more in less than a minute to give the Terps a 3-1 lead.

“There were a couple times when we just needed him to make a play,” Tillman said, “and he got isolated and [North Carolina] didn’t slide, and all he needs is a sliver.”

After DeMaio and Wisnauskas — who scored or assisted on each of Maryland four first-quarter goals — solved the Tar Heels defense in the Terps’ 4-2 opening period, the floodgates opened for the rest of the offense.

The Terps attack came to life in the second quarter with goals from Wisnauskas and fellow attackmen Jared Bernhardt and Louis Dubick to widen their advantage during a 5-0 scoring run.

Faceoff specialist Austin Henningsen controlled the dot early and often, especially in the second quarter, when he went 8-of-9. The Terps made good on that possession advantage, outscoring North Carolina 7-1 in the second period to establish a decisive 11-3 halftime edge.

“It’s awesome having Austin out there. It’s like make it, take it,” Wisnauskas said. “We can get in a rhythm, we can get going, we can get our guys going [and] our goals can start coming.”

Facing a sizable deficit, North Carolina turned to an aggressive playstyle in an attempt to will itself back in the game. Using intensive rides to pressure Maryland and having two poles on the wings of faceoffs, the Tar Heels tried to close the large possession gap.

North Carolina enjoyed more success in the third quarter, matching the Terps’ shot total and scoring three goals, including the first two of the half from Kelly.

Despite the Tar Heels’ increased offensive production, Maryland fended off any comeback attempt with their offensive prowess. Following Kelly’s two goals to start the third quarter, the Terps scored four of the next five to take a nine-goal lead — their largest of the game — heading into the fourth.

North Carolina scored the first three goals of the fourth quarter, but Maryland’s possession advantage once again came into play. The Terps used the cushion they built in the first half to comfortably work the clock and prevail from the physical bout in a victory over their old ACC rival.

“All six of us were working together on offense,” DeMaio said. “After we got a little organized [and] communicated better, after the first couple possessions and the defense got stops for us, we were able to get in a little bit of a rhythm.”