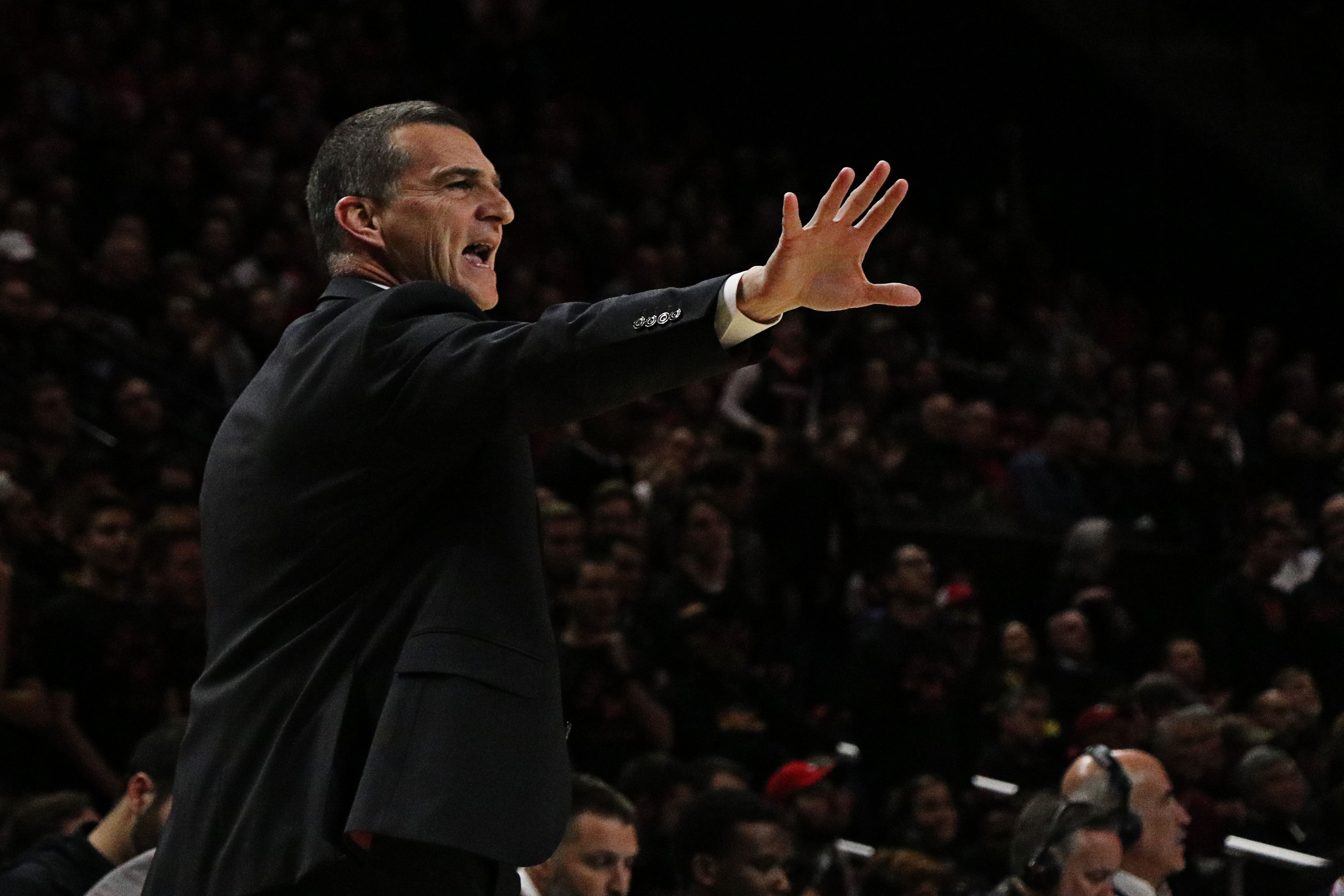 Head coach Mark Turgeon calls out a play during Maryland’s 76-71 loss to No. 4 Virginia at Xfinity Center on Nov. 28, 2018. (Andi Wenck/The Diamondback)

The No. 11-seed Bruins ran laps around the floor, and finally Windler made his backdoor cut to the rim. But Murphy’s feed was tipped, the ball fell to guard Darryl Morsell and Belmont was forced to foul.

Had the ball gotten to Windler, the senior — who erupted for 35 points — may have burned the Terps once more. Instead, he was left with his head in his hands, his team’s upset bid coming up just short. No. 6-seed Maryland, which trailed by as many as 12 in the first half and entered halftime down six, had eked out a 79-77 win to avoid a third consecutive winless postseason.

In a one-point game with under two minutes remaining Thursday, a scrum on the floor for a loose ball went Maryland’s way and left Belmont’s defense woefully out of position.

Morsell secured it and dished to forward Jalen Smith, with only Windler between he and the basket. The freshman threw down a vicious slam dunk on top of Windler. Guard Anthony Cowan, the most experienced player on the fourth-youngest team in the country, quickly calmed Smith down to avoid a technical foul call.

“Just a lot of energy, and when you see Bruno coming in your face, even more energy,” Smith said. “It’s like, ‘Oh, I actually just did something impressive.’”

When order was restored, Smith drained the and-one free throw to put the Terps up four and finish a stellar night on the biggest stage of his career, scoring a team-high 19 points and grabbing 12 rebounds.

Forward Nick Muszynski hit a triple with a minute remaining to cut the lead to one, and after an empty Maryland possession, the Bruins had the chance to steal a win at the buzzer. But Morsell’s free throw with 2.5 seconds left clinched the narrow win.

In what has been a staple for Maryland this year, missed layups early amounted to a slow start. The Terps missed four of their first five shots and the Bruins missed their first five before rattling off three straight lay-ins to take an early lead.

After being held to three points in Maryland’s Big Ten tournament loss to Nebraska last week, forward Bruno Fernando leveled the scoreline at 11 with 13:39 before halftime. From there, Belmont embarked on a 15-3 run in about four minutes, building a 12-point lead. When the lead crept back to 12 two minutes later, the Terps went on a 9-0 run, highlighted by a pair of layups from Morsell, who matched a career-high 18 points.

“We’ve got to be mentally tough to win these type of games,” Morsell said. “It’s something we harp on all the time as a team.”

Cowan, often a large part of Maryland’s wins, finished 3-for-18 with nine points. Despite Cowan’s shortcomings, the Terps still came out of the locker room firing, opening an eight-point advantage with a 14-0 run. Fernando became more involved on offense, completing a three-point play and slamming home past two defenders.

Later in the period, though, Belmont capitalized with Morsell on the bench with three fouls and Fernando and Smith catching a breather. The Bruins scored on three of the four possessions with that trio off the floor.

Maryland turned it over just five times, a season-low, but Smith threw the ball away shortly after checking back in. Guard Kevin McClain caught an outlet pass and finished an acrobatic and-1 around Fernando, then added two more free throws less than a minute later.

And Windler wouldn’t go away, either, nailing seven 3-pointers during the game. He scored all nine of Belmont’s points during a three-minute stretch late. But it was Cowan, having clanked his first eight three-point tries, who came through with a triple to tie the game at 71 with four minutes left.

Morsell put Maryland ahead with an and-1, and Smith added his own emphatic three-point play down the stretch.

So, after Belmont threw away possession with seconds winding down, Windler could only heave from half-court at the buzzer. The attempt fell well short, and the Terps skipped in celebration toward their bench, having secured their first postseason win in nearly three years.

“A lot of people had us down as losing this game,” Smith said. “We hear that talk all the time. We made sure we just focused on each other, because each other is all we got.”