After a slow start, Kyle Long is coming along for Maryland lacrosse 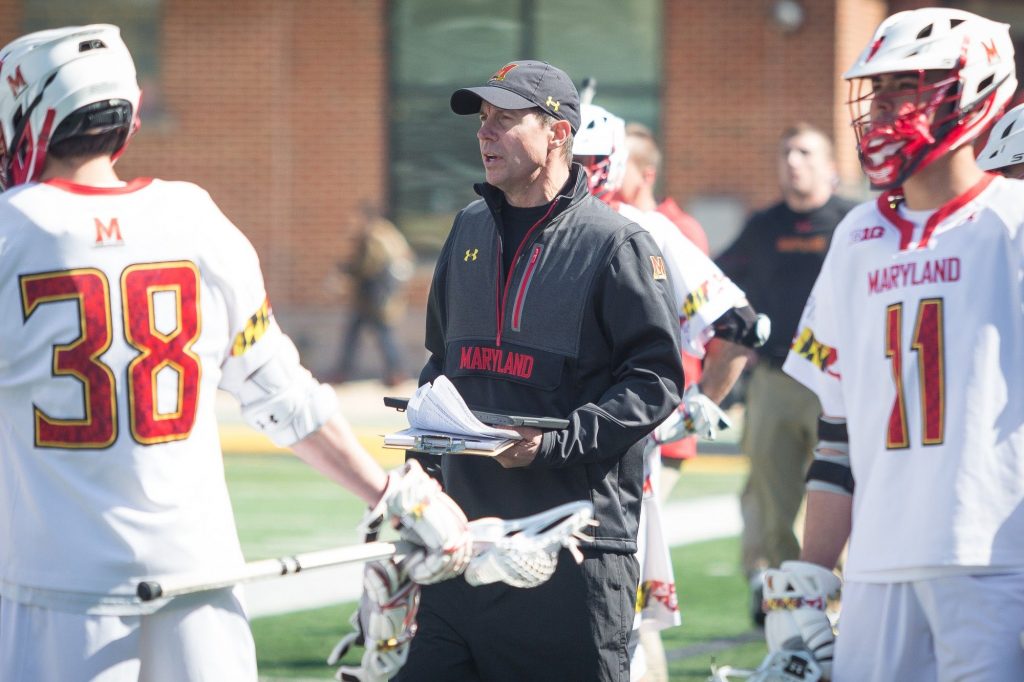 Midfielder Kyle Long built a reputation as a high-volume scorer at at Springfield High School in Pennsylvania, where he amassed more than 400 points.

But through his first three games with Maryland men’s lacrosse, the freshman was held without a point.

Since that scoreless spell in the beginning of his career, Long has emerged with a goal or assist in four consecutive games and established himself as an integral element of the Terps’ attack.

“You’re in your high school and you’re kinda the guy, but [then] you come here and everyone’s good,” attackman Louis Dubick said. “He’s been finding his way and stepping up in some big games.”

Long admitted he was still finding his footing and adjusting to the increased pace of college play during his first three games. But his older teammates told him the game would slow down as he adjusted.

Even after a quiet initial three-game stretch, coach John Tillman inserted Long as a member of the second midfield line that’s expected to come in and create scoring possibilities. With an opportunity against Colgate on Feb. 19, Long knew he had to capitalize.

“Just wait your time, wait for the opportunity,” Long said. “Then, get your chance and try to make the most of it.”

Against the Raiders, Long ran to goal-line extended, then turned and fired a pass to midfielder Christian Zawadzki, who then rocketed home a goal. Given his aptitude for passing, this was a fitting way for Long to notch his first collegiate point.

Long, a three-sport athlete in high school, credits his background as a point guard for helping him develop as a distributor.

Tillman also referred to Long’s basketball days as a reason for his vision and high IQ. Those traits helped Long climb all the way to third on the nation’s all-time high school lacrosse record board with 330 assists.

Building on his first point, Long recorded his first multi-point game with two assists in Maryland’s 14-9 win over Navy just four days later. The first went to Dubick cutting to the front of the net, and the second came off a 20-yard skip pass from the well behind the net to the top of the attack’s setup.

“Much like any freshman, you kind of go through some ups and downs. But the last few weeks, he’s gotten more comfortable,” Tillman said following the Navy game. “I think there will be bigger things to come from him.”

Tillman’s prediction came to fruition just a week later, as Long turned in the best game of his young career. Against Notre Dame on March 3, Long scored on a runner for his first goal, slotted home a catch-and-shoot opportunity and dished out two assists during the 14-13 loss.

To extend his streak to four straight games, Long notched a goal and an assist to help Maryland defeat Albany last Saturday.

Despite looking to open up goal-scoring chances with key passes, Long has balanced his aggressiveness in playmaking with taking care of the ball. Long leads the team in assist-to-turnover ratio this season, with six assists and three giveaways.

Now that Long has established himself as an effective playmaker from the second midfield line, the team will continue to rely on him to yield the valued depth scoring and facilitating he’s managed of late.

“Just playing my role,” Long said. “From Jared [Bernhardt] to Logan [Wisnauskas] to [Dubick], it’s just a trickle-down effect for me that’s been really positive.”