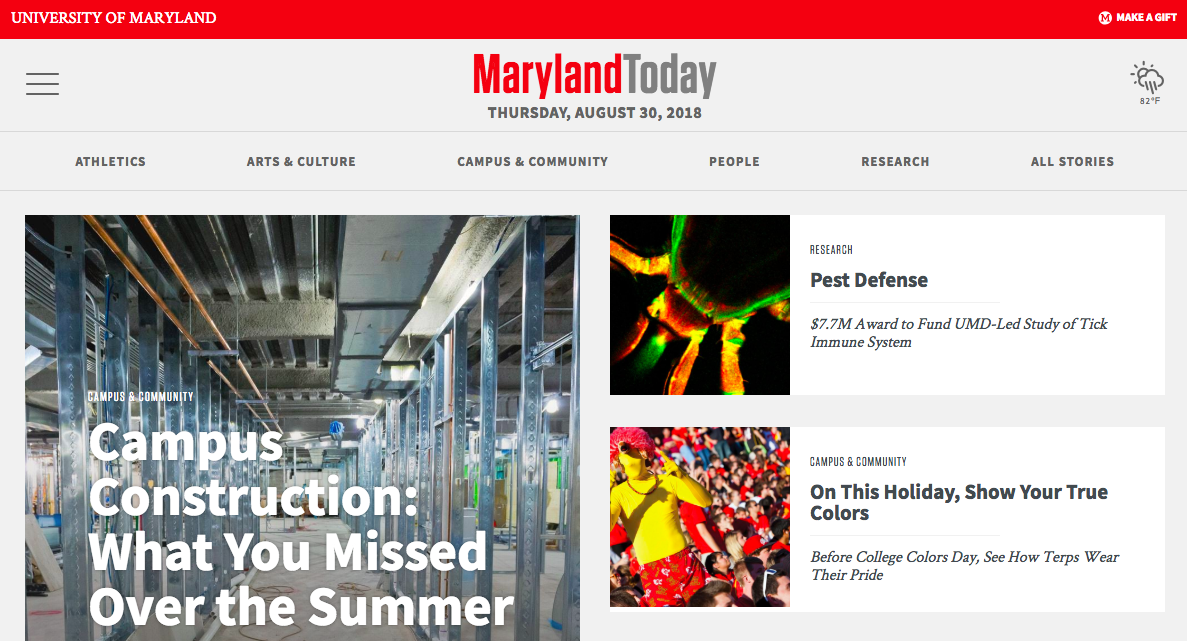 The hard-hitting journalism at Maryland Today.

Maryland Today, the PR website run by the University of Maryland’s Office of Strategic Communications, caused a minor hubbub when it launched at the start of the academic year. There were Twitter jokes and a couple of Diamondback columns, but the whole thing calmed down after a few weeks. But, remarkably, Maryland Today has continued to churn out content, delivering updates directly to students’ inbox every weekday.

Now, I doubt most students follow Maryland Today too closely. But I’m not like most students: I read Maryland Today every morning and tweet out some of my favorite pieces. So I thought it would be worth putting my expertise to good use and give a little update for those who have fallen behind.

Maryland Today’s pieces are a healthy mix of boring, sinister and hilarious. It publishes lovely articles about nice things; one day in February, its lead story was about how it was warm outside. And it has a lot of puns! One time, it ran an image of a saxophone player with the heading “Sax Appeal.”

The publication also reveals just how much the business school’s ideology has poisoned the university. Every week, it sends out five banal tips for thriving in the workplace. One was, “Replace ‘but’ in your vocabulary with ‘and.’”

Maryland Today explores tough questions, like whether student loan debt is actually awesome. Last week, it ran a glowing profile of an alum who got $1 million from the University System of Maryland to develop his startup — making tea but with more caffeine.

The main point of Maryland Today, of course, is to cast this university’s various misdeeds in the best possible light. One particularly gross example was a piece that said football player Jordan McNair “struggled to recover” after a team workout and later died a seemingly unrelated death from heatstroke, which is 100 percent preventable if treated properly.

Now, dear reader, allow me to let you in on a secret: I sometimes feel bad about how much I enjoy making fun of Maryland Today, as well as my more general animosity toward public relations. Maryland Today is a PR publication, and the PR people behind it are just doing their jobs, right?

Jennifer Pan made a similar critique in Jacobin a few years back, arguing that the PR profession demands a great deal of emotional labor, requiring folks to evince authentic enthusiasm for their client. So when journalists complain about shitty PR pitches, they’re essentially demanding that PR people more convincingly fake their enthusiasm. The general journalistic antipathy for PR, Pan further argues, has a gendered aspect: Journalism is largely male and PR is disproportionately female.

This is a fair argument, I think, against harping on the quality of some public relations documents. While it’s fun to joke about Maryland Today’s bad puns, the competence of the publication shouldn’t be the heart of the critique. It’s generally dangerous to ascribe moral worth to the excellence one brings to their profession. A good lawyer is not a good person if they put those skills toward unethical ends. Whether one is good or bad at doing PR is almost entirely neutral.

Rather, the heart of our criticism should be the substance of the PR work — the moral status of the interests a PR person advances. Let’s take Michael Sitrick, for example. He’s a very successful flack (he calls himself “the Fixer”), and this university’s journalism school hosted him last semester. His clientele includes Harvey Weinstein, Chris Brown and Exxon. Sitrick is, so far as an outsider can tell, a bad person; the quality of his PR work is quite good, but the substance is reprehensible.

Maryland Today happens to produce PR work that is of both poor quality and poor substance. But it’s the latter that’s key. Maryland Today’s aim is to cover up this university’s poor governance with heaps of puns and business school bullshit. And as long as it continues to pursue that aim, it remains a detriment to the health of our community.