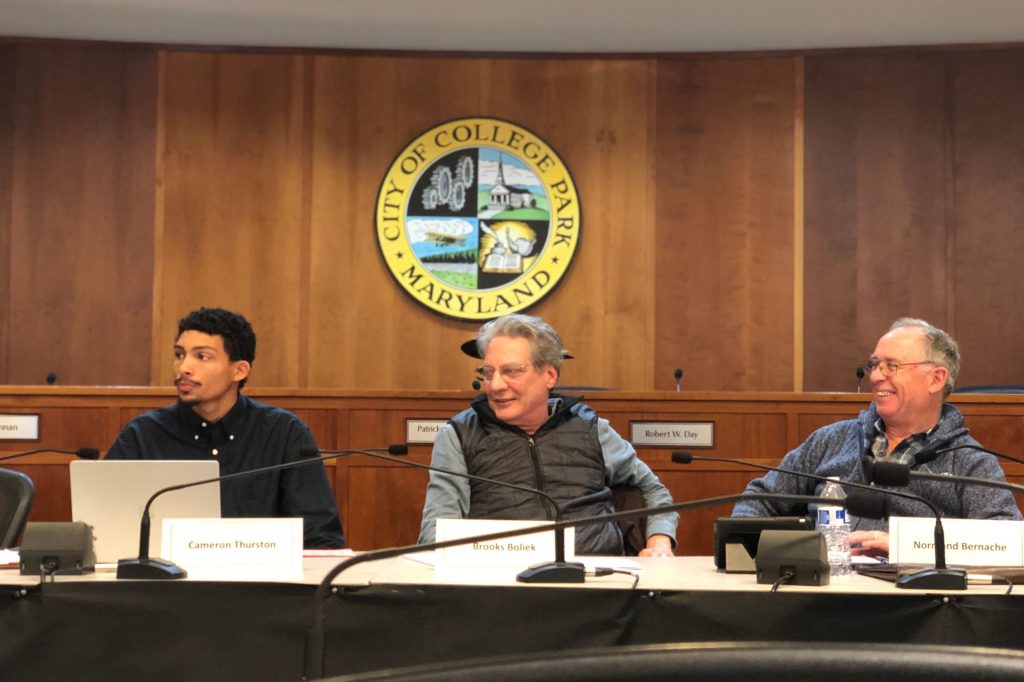 The forum was the second community meeting designed to solicit public input on the potential change. It follows the first forum on Feb. 11, where seven College Park residents spoke out against the policy, stating that it would favor incumbent candidates and allow council members to lose touch with their constituents.

“Having two-year terms makes each elected official much, much more accountable to the voting population,” Carol Nezzo, a District 3 resident, said Monday to a crowd of about 13 people in Davis Hall. “If an official’s doing a good job, they’ll get re-elected. If not, two years is a very reasonable time to get rid of them.”

The city council first set exploring longer terms as a priority more than a year ago and established a 10-member commission in November to create an informal report on the pros and cons of passing an amendment to do so. Once the report is presented, the city council will decide whether to have a non-binding referendum on the charter change.

Several of the residents that spoke at the first forum returned to speak again Monday, including District 4 resident Oscar Gregory.

“Usually when you do things that … drastically or fundamentally change our constitution in our city, you have to have a darn good reason for doing that,” Gregory said. “So far, I have heard none.”

City officials have said that proposed measures to lengthen council terms would be, in part, an effort to create more continuity and productivity in city council terms.

Gregory handed the commission 65 notecards he collected in a community survey, where residents signed a statement opposing the charter change. He estimated that more than half of the residents he surveyed opposed the change and only about 20 percent supported it. The rest either didn’t respond or didn’t have an opinion, he said.

Gregory said he and a neighborhood coalition conducted the survey, though he didn’t specify who was involved, how many residents were contacted or where the group surveyed residents.

Gregory wasn’t the only resident who came in with props either. Resident James Garvin came up to the podium with a copy of The Spirit of the Laws by Montesquieu, the Maryland Constitution and the U.S. Constitution.

“If I use these words, I will only be mocked,” Garvin said. “I am one of those filthy, disenfranchised residents. Not a college student. I’m not a university developer. I don’t matter.”

Garvin continued, expressing his frustration with the idea of extending terms — and with city officials themselves.

“This Constitution of Maryland and the United States kind of mean —” Garvin tossed his papers to the floor after wiping them on his bottom, “— that to them.”

He said the mayor and council “want to listen to the electorate they want to engineer.”

“Look at these old people,” Garvin continued, gesturing to the residents. “They’re not part of that electorate. ‘Cause they’re old, they’re conservative, they are knowledgeable and have lived life. We know what we’re doing.”

He left the podium to a round of applause from the other residents.

Many residents reiterated several of the same concerns. However, some residents, like Marcia Booth of District 1, also argued that if terms were to be extended, they would want a provision that would allow voters to remove, or recall, councilmembers who weren’t effective after part of their term.

“To allow somebody to remain on the city council for four years and then not performing would not be to the benefit of voters,” Booth said.

Only one resident, former District 1 Councilwoman Christine Nagle, spoke in support of the extension. She said new members use their first year to “come up to full speed on city affairs,” while their second year is focused on getting re-elected.

“There’s a potential for the council to work more cohesively and to be more collegial if they know they’re going to be working together for a four-year period,” she said

At a meeting following the forum, the commission decided to look into and the potentials of recalls, accountability and the difference between staggered and concurrent terms.

At the commission’s last meeting March 4, members discussed the different themes they planned to orient their report around, including the time it takes for new council members to be fully active, the continuity of members, engagement with University of Maryland students, campaigning frequency and voter participation.

Though comments at the two forums were generally against the charter change, several written comments submitted online have been in favor of four-year terms.

More written public comments have been submitted but have yet to be published by the city, said city clerk Janeen Miller. The commission will strongly consider public comment until April 30.

“We want information, and that’s what we’re here to do,” commission chair Cameron Thurston said. “So any public comments, [if] anybody has any opinion, we want to hear it.”