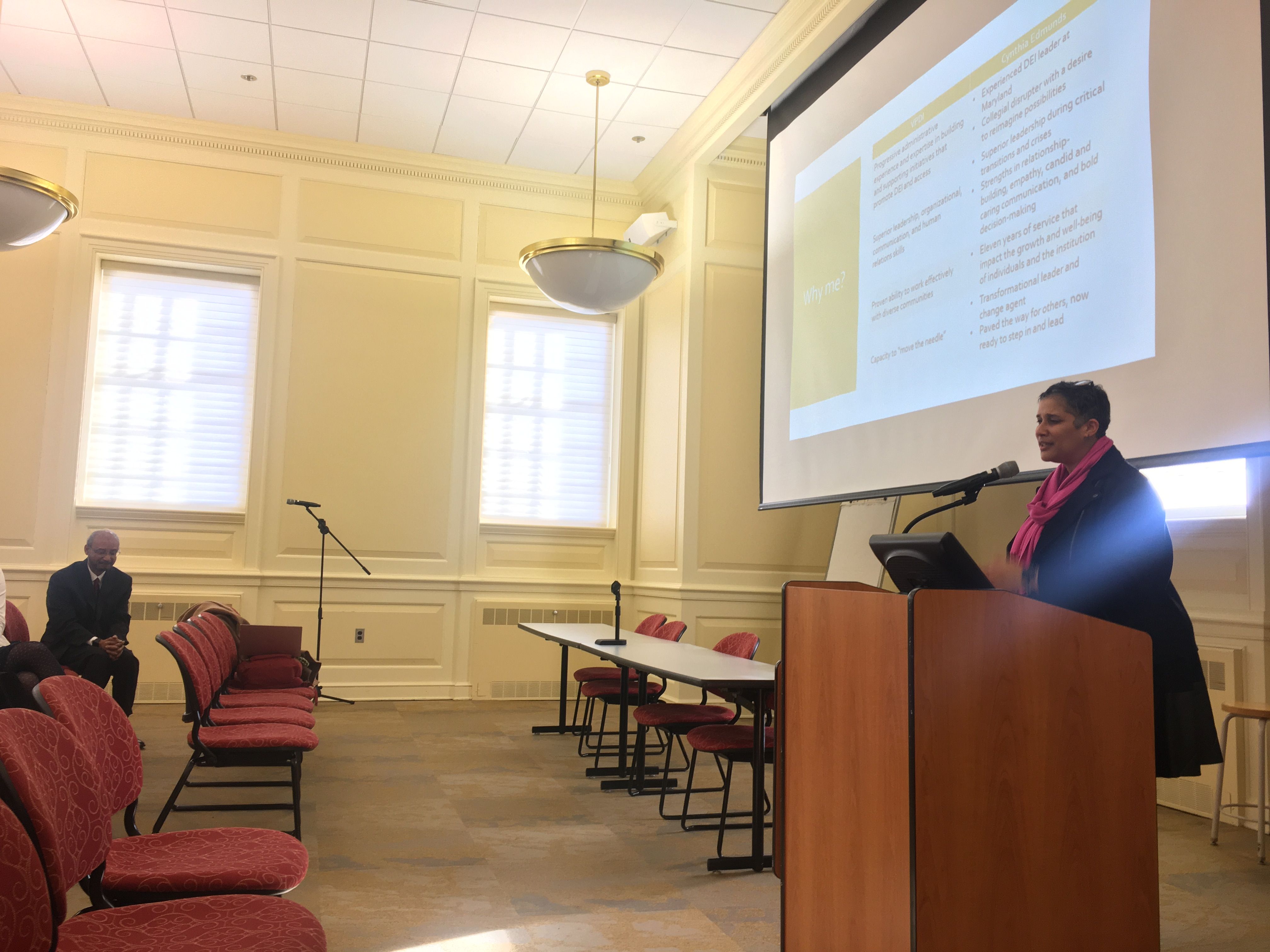 Cynthia Edmunds, the fourth candidate for the University of Maryland's diversity and inclusion vice president, spoke at McKeldin Library on Thursday. (Sarah D'Souza/For The Diamondback)

As an undergraduate student struggling to find her niche at Notre Dame of Maryland University, Cynthia Edmunds immersed herself in her surroundings, eventually landing a job in the school’s president’s office.

Edmunds, the fourth finalist for the position to present to the campus community over the past two weeks, told a group of about 45 people in McKeldin Library on Thursday that she’d be the best person for the role because of her ability to lead with vulnerability, make bold decisions and take control in crisis situations.

“What got me here is daring greatly and taking the road less traveled, and learning to be really comfortable with my own sense of difference,” she said.

Edmunds told the audience, which consisted mostly of administrative faculty, that she wants to launch a new framework for the future of diversity and inclusion at the university. She stressed a need to re-examine and amend the Office of Diversity and Inclusion’s structure.

“This is not just a problem that ODI has to fix,” said Edmunds, who was hired as the university’s interim CDO in August. “We have to be able to start talking about how people see themselves as part of diversity and inclusion.”

The purpose of the VPDI position, announced in July 2017, is “to advance diversity, equity, and inclusion as core institutional values,” according to the Office of the President’s website.

Edmunds was brought on as the interim CDO after the resignation of Roger Worthington, who later publicly criticized the administration for not supporting his efforts. Worthington’s predecessor, Kumea Shorter-Gooden, resigned in 2017.

Since becoming CDO, Edmunds — who described herself Thursday as a “collegial disrupter with a desire to reimagine possibilities” — has worked on several initiatives. She highlighted the Thriving Workplace Initiative, where her team worked to create a better work environment for faculty by talking to them about their experiences at the university.

Going forward with her idea for a new framework for diversity and inclusion, Edmunds said one of her priorities is tracking where the university is spending its money on diversity efforts.

In November, the university released an external review of its diversity and inclusion efforts, which didn’t include quotes or stories from students and declined to offer concrete recommendations.

Instead, the report affirmed support for the actions the university’s administration has taken since 2nd Lt. Richard Collins, a black Bowie State student, was fatally stabbed on the campus in May 2017 — though some students and activists said they’d hoped to see a more substantive result.

After Collins’ death — in which Sean Urbanski, a white former student at the university, is charged — the university hired a hate bias response coordinator, launched a diversity task force and created an online log to track hate bias incidents.

Edmunds stressed that she wanted to understand what diversity and inclusion meant to different communities.

“I’ve been doing diversity and inclusion work for the President’s office for nine years,” she said, “and what I found — perpetually — is I had to enter into conversations defining what I mean by diversity, equity, and inclusion.”

Though Edmunds said she intended to end with enough time to answer questions, there was only time for one.

University archivist coordinator Kendall Aughenbaugh asked Edmunds what she would do to increase transparency within the administration.

“I know the campus is only asking at a moment of crisis,” said Aughenbaugh, a history and library science graduate student, “but I feel like if it’s a constant conversation, that could be helpful.”

Edmunds said transparency should begin with her and other leaders on the campus.

“If we want more transparency, we really have to build capacity so that people are capable of coming into the work and coming into the conversations and articulating the importance of this without feeling like we’re throwing people to the wolves,” Edmunds said.

Adrienne Wicker, the associate director of the university’s Center for Leadership and Organizational Change, said while choosing a VPDI would be a “hard decision,” she thinks Edmunds’ experience gives her a leg up.

“She has some very specific information that will be useful and allow her to hit the ground running,” Wicker said.

After the presentation, Edmunds spoke to a group of six students in a close circle, relaying similar information.

She said that her previous experience with ODI would allow for continuity with the work she has done through the position thus far.

“I firmly believe that I am uniquely positioned to step into this role,” she said. “I heartily believe that the time has come really for us to shift the way that we’re doing this work.”