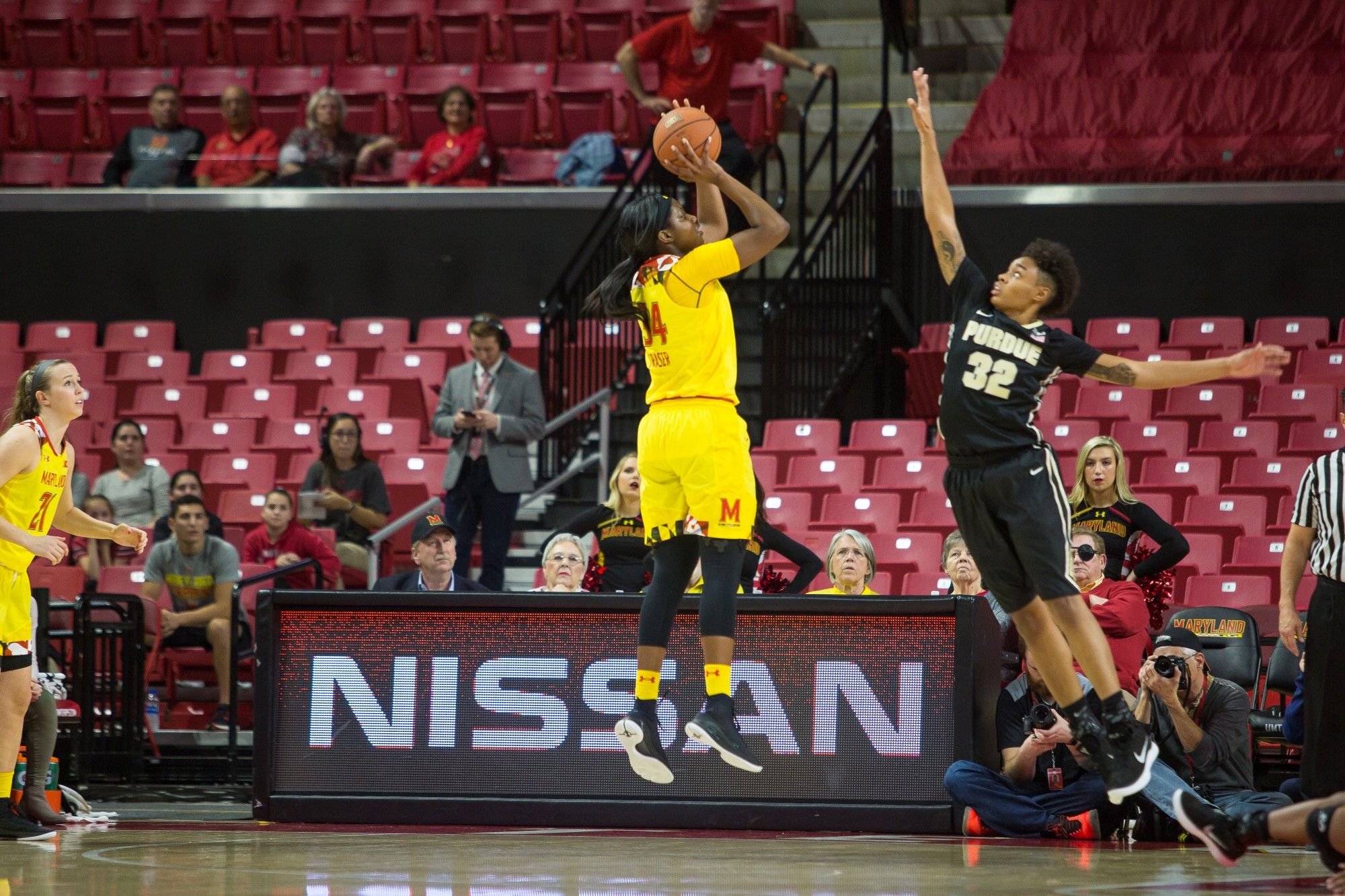 When Maryland women’s basketball forward Brianna Fraser trudged toward coach Brenda Frese to be honored at center court Saturday, the commemoration was bittersweet.

Fraser garnered a standing ovation from the 8,638 fans at Xfinity Center before the No. 8 Terps took on Illinois. But in her final regular-season contest in College Park, the team’s lone senior was forced to make the pregame trek in a boot, having sprained her left ankle the prior week.

As Frese embraced Fraser at midcourt, the crowd’s praise gave a glimpse into how much the fanbase has taken notice of the forward’s contributions.

Despite an uneven start to her career, fluctuating playing time and an annual addition of bigger stars at Maryland, Fraser never wavered in her commitment to the program and still made an impact during her four years in College Park.

“I’m just trying to go out there and show by example,” Fraser said. “Everybody on this team brings leadership in their own way, so they just make my job very easy.”

[Read more: After gutting out a Big Ten title, Maryland women’s basketball is ready for the postseason]

When she first arrived at Maryland, Fraser was pegged as a rising star. The Brooklyn, New York, native was a McDonald’s All-American and the No. 15-rated recruit in the country by ESPN.

At first, she struggled to carve out a role. Behind dominating bigs like Brionna Jones, Fraser didn’t see the floor often in her first two campaigns. She averaged 4.0 points on 10.3 minutes a game as a freshman and only improved to 6.1 points in 12.4 minutes the following season.

Obstructed by a backlog of forwards ahead of her and a quiet disposition that, according to her coach, prevented her from “looking you in the eye,” Fraser didn’t live up to her pedigree in the early stages of her career.

Motivated by a desire to crack the rotation, Fraser went on a mission to improve her game. She made transforming her body a point of emphasis, with some help from strength and conditioning coach Kyle Tarp.

“I used to get very tired,” Fraser admitted. “We worked really hard on conditioning with [Tarp]. And being able to go hard in practice helped with that.”

With an updated training regimen and a newfound confidence that enabled her to be a more substantial locker room presence, Fraser made a significant leap between her sophomore and junior years.

For the first time in her career, she averaged double figures, with 10.2 points per game. And although she had just one start, Fraser finally had a heightened role in Maryland’s rotation.

This season, Fraser’s production has fallen off with the addition of forward Shakira Austin, but she’s still averaged 7.8 points and 4.4 rebounds.

And true to form, Fraser didn’t let getting passed over in the lineup bother her. She’s taken the highly touted freshman under her wing, and in her final season in College Park, Fraser continues to showcase her growth as a leader.

“The first couple months I was here, she was always in my ear about stuff,” Austin said. “She just puts a lot of confidence into me, and hopefully I’ll be able to be as aggressive as she is.”

Though the left ankle sprain Fraser suffered against Minnesota sidelined her for her final regular-season contest, the predicament allowed for another exhibition in the post player’s transformation.

After nearly every sequence Saturday, Fraser was chirping advice to her teammates from the bench. Her inability to compete didn’t deter her, just as her willingness to play within her role allowed her to eventually grind out an impactful career at Maryland.

“She just hypes us all up, she brings so much energy to our team,” forward Stephanie Jones said. “Even when she’s out now, she’s still talking to us, being a great leader.”