After gutting out a Big Ten title, Maryland women’s basketball is ready for the postseason 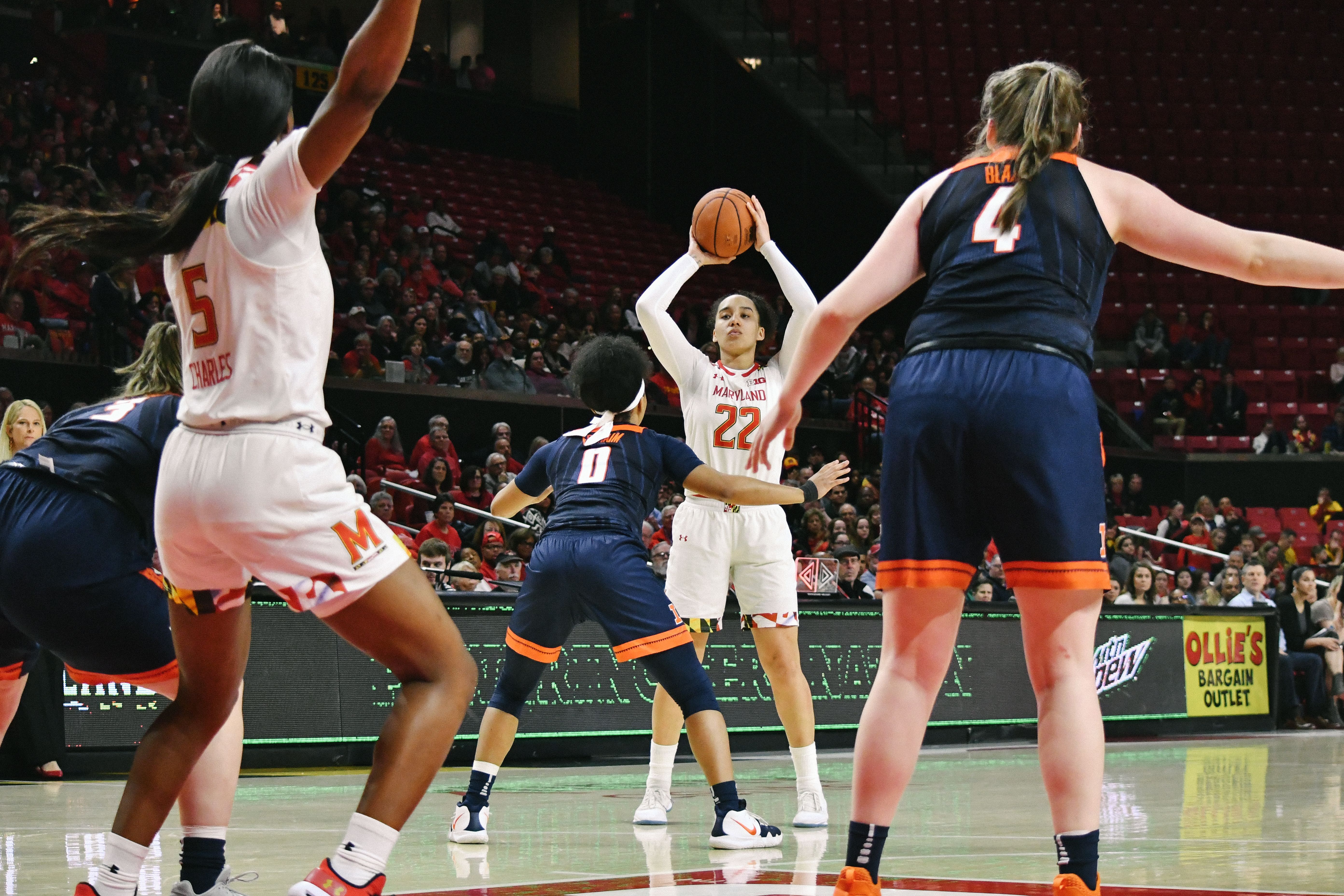 The comfortable finish to Maryland women’s basketball’s hard-fought, Big Ten-title-clinching victory Saturday was an apt punctuation mark for the arduous campaign that led to it.

The No. 8 Terps’ double-digit lead was cut to a tie game midway through the third quarter, and just as coach Brenda Frese had expounded at seemingly every press conference during 2018-19, Maryland had to weather an inferior side’s best shot.

But the Terps would not be denied what they set out to do at the season’s dawn. Behind an 11-2 third-quarter burst, Maryland overcame another laborious battle to dispatch the Illini, 71-62, and clinch an outright Big Ten regular-season title.

Going into March, the Terps hope their experience in close games will power them deep into the conference and NCAA tournaments.

“We’ve really grown up through these games, especially when they’ve gone down to the wire,” Frese said. “It’s a little too close for comfort, but it really does prepare you for the postseason.”

Since the start of the season, Maryland has frequently had to claw through adversity.

In the Terps’ opener against Coppin State, they shot just 38.6 percent despite the lopsided 57-point margin. And in Puerto Rico, Maryland survived a nearly 15-minute bucketless stretch against Georgia to prevail, 58-51, on Nov. 24. Five days later against Georgia Tech, Frese’s squad absorbed a 26-9 third-quarter onslaught from the Yellow Jackets to hold on, 67-54.

In each of these slogs, the Terps were forced to discover unconventional ways to come out on top. If they can continue to win as the competition ramps up in tournament play, even when not playing to their maximum potential, Frese likely won’t mind the occasional head-scratching scorelines.

“As long as you can continue to learn from winning and not have to take a loss out of it,” Frese said. “It might not look the prettiest, but we’ve been able to find a way to win.”

Still, Maryland’s up-and-down form has come back to bite them at times this season.

An unranked Rutgers squad handed the then-No. 4 Terps their first defeat of the season, 73-65. Unusual falters from Maryland’s three-point defense allowed the underdogs to go 9-of-21 from behind the arc.

While road defeats to then-No. 14 Iowa and then-No. 17 Michigan State were defensible, dropping them by 13 points and 17 points, respectively, was worse than Frese would’ve preferred.

But what the 17th-year Maryland coach appreciates is how her squad responded each time, going on a three-game win streak after falling to the Scarlet Knights, an eight-game blitz after succumbing to the Spartans and closing the regular season with another three-victory stretch after the loss to the Hawkeyes.

“It’s been a test of how we were gonna respond,” Frese said. “Any time we had a bump in the road or a setback when you look at Michigan State or you look at Iowa beating us, we didn’t hang our head and we didn’t feel sorry for ourselves.”

That continued positivity has allowed the Terps to overcome several uneven outings. And by winning 11 of its final 12 games, Maryland clinched its fourth regular season conference title in five seasons and the No. 1 seed in the Big Ten tournament.

A season after falling to Ohio State — both in the regular season and conference tournament title race — the Terps have been trying to get back on top with a vengeance. And if the squad’s heady conquest over Illinois is symptomatic of nothing else, Maryland isn’t going to go down in March without a fight.

“It feels great, especially to be able to be a sole champion this year,” forward Stephanie Jones said. “Last year we came up a little short, and this year we knew that that’s not where we wanted to be.”