We shouldn’t respond to racism with calls for unity 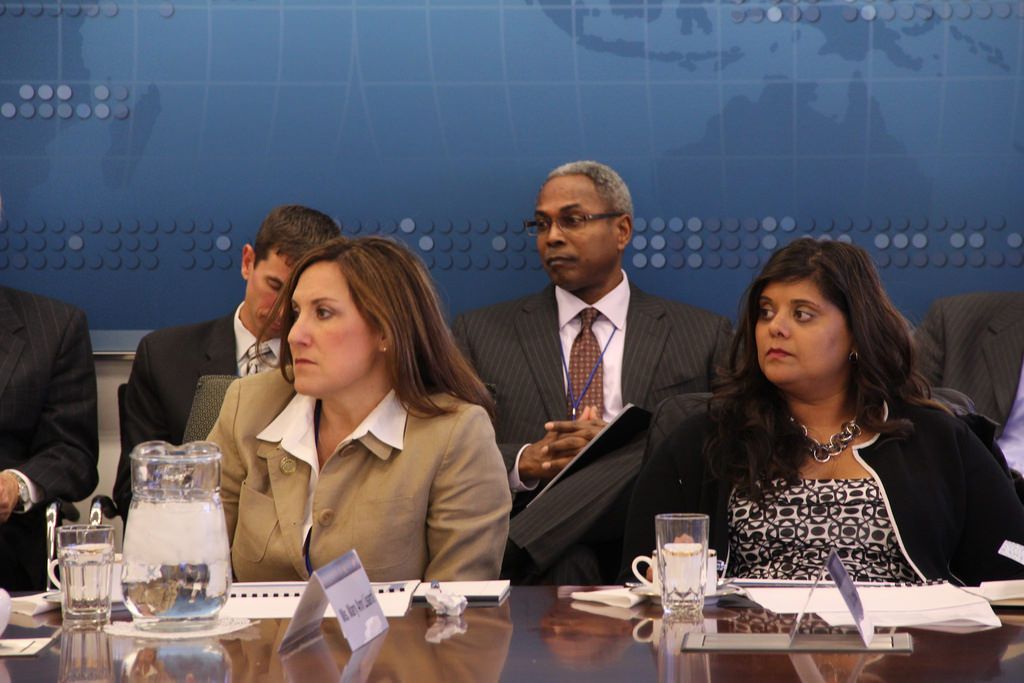 Del. Mary Ann Lisanti (left) in 2015 at a meeting with army officials. Photo via Flickr.

Recently, Del. Mary Ann Lisanti (D-Harford) used the n-word to describe a legislative district in Prince George’s County. It was incredibly disappointing, but even more so because of her response to the backlash. Despite her effort to seem like she is truly remorseful, all she has offered are excuses and equivocation.

But her behavior isn’t really up for debate. Racial slurs are unacceptable, period. Properly expressing guilt for explicitly racist remarks requires an actual apology or — better yet — a resignation. What is more nuanced is House Speaker Michael Busch’s response to the incident. While he did remove Lisanti from two leadership roles in House committees, Busch also talked about how leaders in the House “need to be able to bring people together … not tear them apart.”

This idea of “bringing people together” and “coming together to overcome differences” has been many politicians’ mantra in the face of controversial incidents over the past few years. It may stem from the fact that our political system is extremely polarized — when confronted with tense conflict, politicians call for unity to address the deep division in perspectives without meaningfully engaging with the source of the conflict.

But the seemingly positive goals of teamwork and mutual understanding are meaningless. Rarely do groups come together following explicitly divisive controversies — nor should they. All this “overcoming differences” idea does is erase the importance of what separated them in the first place. If racism is splitting people into the opposing sides of people who condemn racism and people who perpetuate it, there is no need to overcome differences. It is necessary, however, to stop legitimizing one of those sides.

I get it. The tone of “bringing people together” is nice in principle. It makes heated debates seem like they can end in compromise and contentment on all sides. It gives the impression that we can all work together to create better institutions. It also lends a false air of maturity to politicians and gives them an excuse for not taking hard stances on important conflicts. Really, though, those who claim that unity is the answer only ignore the issue at hand and absolve the people involved of any responsibility to solve it.

As for Lisanti’s scandal, this is not a time for compromising values and forgetting differences in opinion. When the differences in perspective revolve around the tolerance of racist slurs, there’s no need for leaders or anyone else to bring people together. Instead, politicians should focus on acknowledging the history of racist politics and the use of racial slurs and enforce consequences for the racist language of other politicians.

This kind of rhetoric also appears in regard to many other issues. Following fiery discussions about climate change, gun control or civil rights, for example, it’s easy to find major political figures during the following days talking about the need to come together and work with one another. Yes, political bodies need some level of agreement to be effective. But when one side is trying to preserve the planet, prevent student death and ensure that people have basic human rights, there should not be pressure to compromise and placate the opposing viewpoint.

And to be frank, if racism is in the equation, I want groups of people to be torn apart. I’d much rather know who is perpetuating and excusing racist language than be under the impression that everything is fine. This is especially true for elections. I don’t want people to join together and forget racism — I want to know whom I shouldn’t vote for in the future.

Explicit racism has been and will continue to be unacceptable. But downplaying racism by sugarcoating racial slurs with a call for unity is itself a subtler form of racism that needs attention as well.