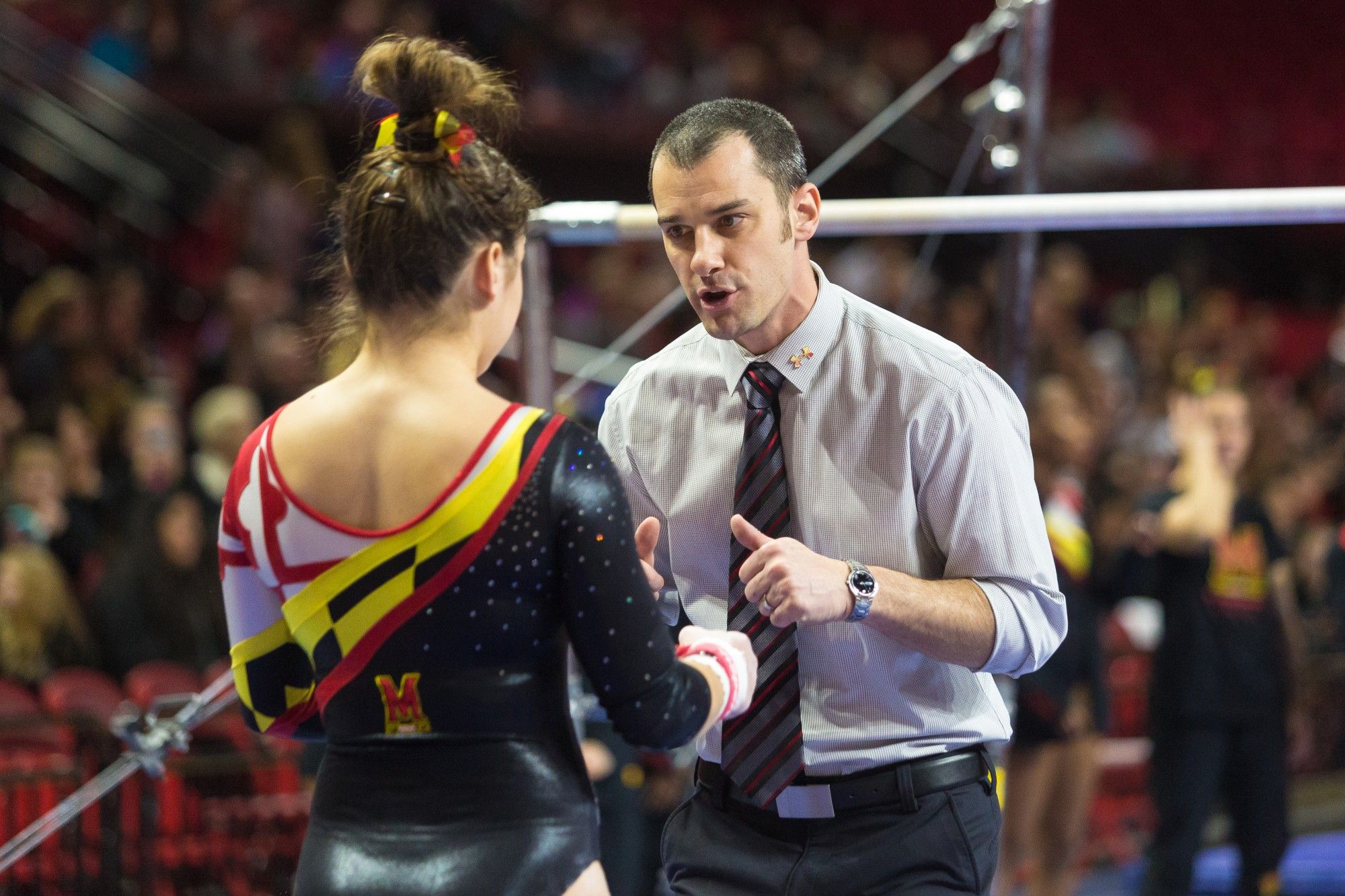 WASHINGTON, D.C. — As soon as Sabriyya Rouse completed her flip during her floor routine, she cracked a smile. The sophomore showed off her charismatic personality, dancing her way to a team high 9.775 on the floor.

Rouse’s performance on the floor was the highlight of an otherwise frustrating meet for the Maryland gymnastics team, which failed to break 195 for the first time since the third meet of the year.

“Sabriyya’s floor was awesome,” coach Brett Nelligan said. “She’s hurting but she’s being tough and put up a great floor routine for us.”

Maryland traveled to the nearby Charles E. Smith Center to take on George Washington and No. 19 BYU. After putting up a solid display in the Big Five meet, the Terps hoped to potentially post their first 196 of the season, but instead finished with a 194.825, falling to both the Colonials and the Cougars.

“We didn’t [quite] get the score we wanted,” Nelligan said. “This helps us a little, but not as much as we would like.”

The Terps started on bars, where Maryland ranks No. 21 in the country. However, they were unable to recreate their season-long success in the event, scoring a 48.675, their lowest bars mark of the season. Sophomore Audrey Barber and freshman Sanya Glauber led the way with 9.825s, but nobody else scored higher than a 9.75.

Maryland then moved onto beam, an event where Maryland struggled at times last Friday. However, the Terps fared much better this time around, earning a 48.85, the team’s second-highest score in the event this season. Barber and junior Tiara Wright’s 9.8s headlined a consistent display for the young squad, with five gymnasts earning a 9.725 or more.

Floor followed for the Terps, who hoped to pass the 49 plateau after finishing just short of the mark in each of their past two meets. However, Maryland was once again unable to get there, finishing with a 48.675 in the event, the team’s lowest score on floor since Jan. 26. Despite spirited performances by Rouse and senior Megan McClelland, who earned a season-high 9.75, the Terps were unable to reach the heights that they expected.

The Terps finished up the meet on vault, receiving a 48.625 score for their efforts. Freshman Alexsis Rubio impressed once again, earning her third 9.8 of the season with a routine that caught the eye of her teammates.

Barber added a 9.8 for Maryland as the team improved upon its score from last Friday, finishing off a 39.175 all-around score, her second-highest of the year.

The 194.825 is enough for a modest increase in the team’s regional qualifying score but is far from where coach Brett Nelligan’s squad wants to be moving forward. The Terps had eight scores below 9.7 and just six of at least 9.8.

However, the Terps are relishing the opportunity to redeem themselves on Monday as they return to Xfinity Pavilion to face off against the Colonials.

“As a team, I think we can overall improve [on] every little thing on events,” Magro said. “We did really well today, but as a team, we’re looking for more.”

With a two-day break in between the meets, the Terps will be hoping to rest up and prepare for a better performance on Monday.

“We have a walkthrough on Sunday [where] we can go over the little things we want to work on,” Magro said. “But overall, we’ll just rest the next two days and get ready to kick some butt on Monday.”

While the Terps didn’t reach the heights they quite hoped on Friday, they will fall back on their principles as they hope to put up a better display on Monday.

“All we can do is just continue to fight,” Wright said. “I think that, as a team, we’re really good at doing that. … We’re fighters.”