Maryland baseball strikes in fifth inning, then holds on to beat Louisiana-Lafayette, 4-2 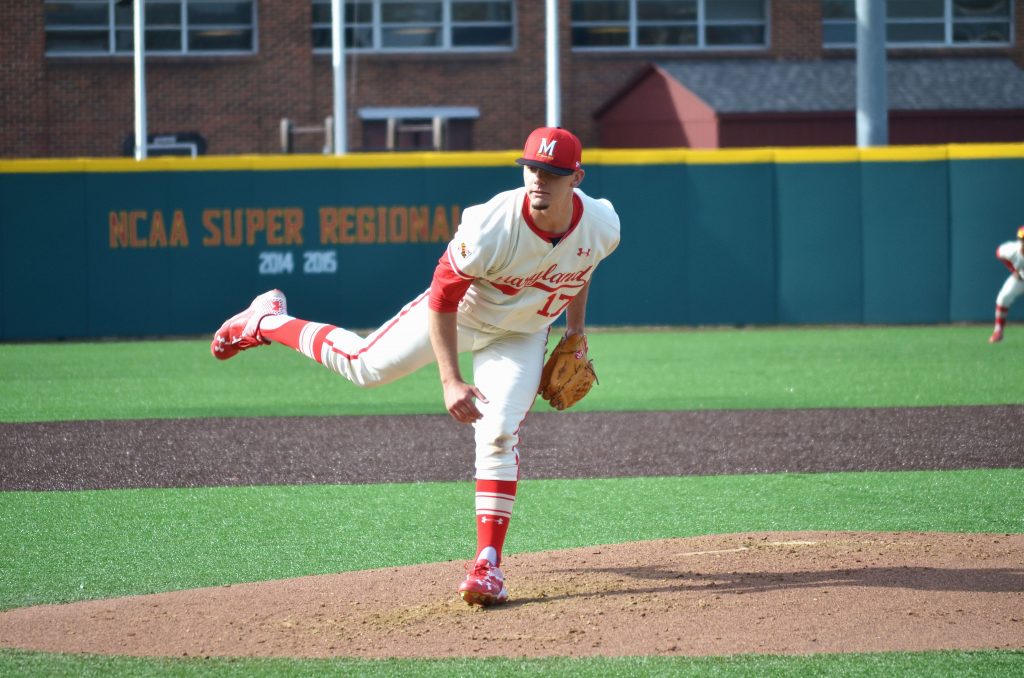 Randy Bednar stepped to the plate in the fifth inning against Louisiana Lafayette looking to give Maryland baseball a spark.

The Terps had struggled through four scoreless innings against left-hander Gunner Leger and found themselves trailing, 1-0. But Bednar had a golden opportunity — runners on first and second with one out.

The hot-hitting center fielder delivered, with a ground-rule double to dead center to score Chris Alleyne and tie the game at 1. Maryland would score two more unearned runs in the frame and wouldn’t look back en route to a 4-2 win at Cajun Field.

After stranding a leadoff double in the first inning, the Terps would have just one hit in the next three frames, while Leger picked up six strikeouts. And a solo home run from Daniel Lahare in the fourth inning put the Cajuns on the board first.

Maryland got to Leger in the fifth, though. Center fielder Chris Alleyne singled and left fielder Caleb Walls reached on an error to set the table for Bednar, who extended his hitting streak to eight straight games to start the season.

The next batter, third baseman Taylor Wright, grounded out to second, sending Walls home for the Terps’ second unearned run of the inning and ending Leger’s night at 87 pitches.

After entering from the bullpen, right-hander Jacob Schultz proceeded to plunk designated hitter Maxwell Costes. Catcher Justin Vought made him pay with a single and advanced on a throwing error by third baseman O’Neal Lochridge to score Bednar from third.

In the sixth, Louisiana’s sloppy play continued. An errant throw by shortstop Hayden Cantrelle — the Cajuns’ third error of the game — allowed Alleyne to reach base and plate pinch runner Tommy Gardiner, who entered when shortstop AJ Lee came up limping after a leadoff double.

In his third start of the season, right-hander Hunter Parsons was shaky at times and efficient at others.

After a leadoff walk to Cantrelle in the second inning, designated hitter Todd Lott almost made Parsons pay with a shot to left that landed just foul, before Parsons sat him down with a called-third strike on the next pitch. Cantrelle moved up on a passed ball and Parsons hit right fielder Orynn Veillon to put runners at first and second with one out, but Lochridge hit into a double play to end the inning and strand two runners.

Parsons breezed through the third inning on 11 pitches, but in the fourth, Lahare skied a solo home run to right field to open the scoring. The Ragin’ Cajuns lead wouldn’t last long, though, thanks to Maryland’s three-run fifth inning, and Parsons would allow three baserunners total in his next three frames.

In the eighth, Louisiana made things interesting. Right-hander Will Glock led off the frame by hitting left fielder Gavin Bourgeois. Coach Rob Vaughn wasted no time in pulling Glock for left-hander Andrew Vail, who walked center fielder Brennan Breaux and struck out Lahare before giving way to another right-hander Nick Turnbull.

Turnbull allowed a run on a fielder’s choice and issued the Terps’ second walk of the inning to load the bases, before forcing Veillon to pop out to center to end the threat.

In seven innings, Parson’s allowed five hits and one earned run on 106 pitches. His six strikeouts were a season-high.

John Murphy struck out the side in the ninth to seal the victory, earning his fourth save of the season.