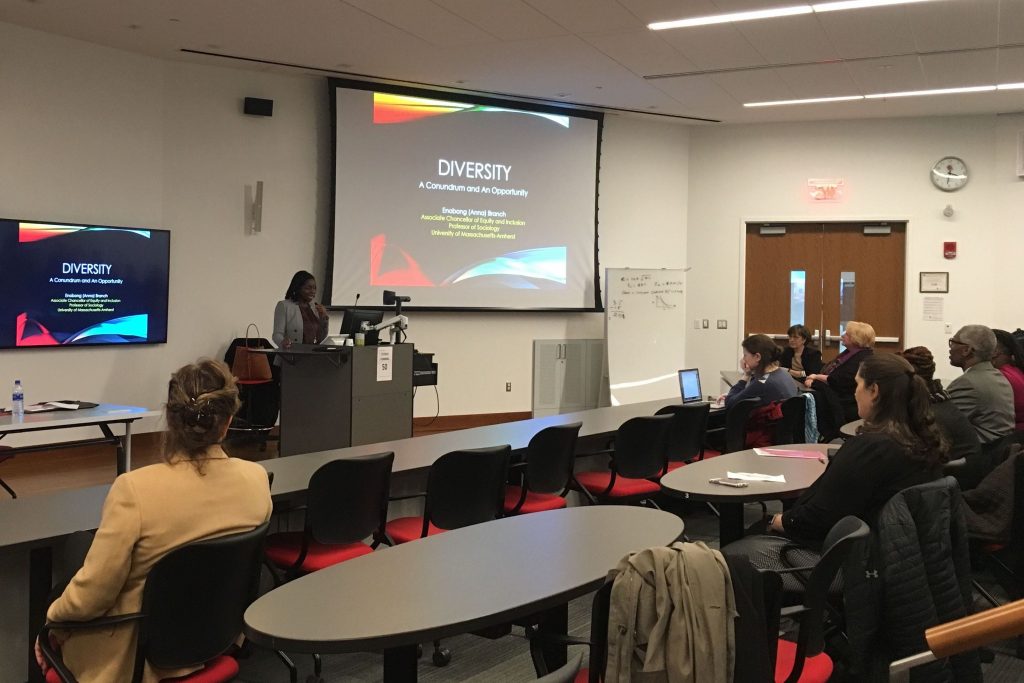 Enobong Hannah Branch, the chief diversity officer at the University of Massachusetts-Amherst and one of the finalists for this university’s new diversity and inclusion vice president position, spoke to students and faculty at an open forum Wednesday. (Angela Roberts/For The Diamondback)

The first of four finalists for the University of Maryland’s new diversity and inclusion vice president position spoke with members of the campus community in an open forum Wednesday about how she would bring a climate of dignity and respect to the school if hired.

Enobong Hannah Branch, the chief diversity officer at the University of Massachusetts-Amherst, said she’d bring practices she established at her current job, such as bringing members of the campus community together for regular conversations, to this university.

“Either we move forward in our call to make campuses places where equity and inclusion are more than just buzzwords … or we don’t,” she said. “I’d like to be part of the solution.”

Branch first spoke with a group of about 60 people — almost all of them faculty — at the Edward St. John Learning and Teaching Center. She then met in a closed forum with a handful of students.

Similar questions came up in both discussions, concerning hate bias incidents on the campus and an environment that leaves some students of color feeling out-of-place and unsafe.

In the initial forum, Stephen Thomas, a professor at this university’s public health school, stood up to share a phone call he had received from a father who was concerned about sending his black son to this university.

“That father had been reading the newspaper about what has been going on at this campus,” said Thomas, who is also black. “How would you help me help this father know that if he sends his black son here, his son will be safe?”

Branch listened closely while Thomas spoke, nodding along. After he finished talking, she noted that she had heard variations of the same question in discussions she’d had throughout the day, and emphasized the importance of building community through open conversation with everyone on the campus.

“It’s hard to do on a campus as large as this one, but it’s essential to do for psychological safety,” she said.

During the student discussion, student affairs doctoral student Chase Oatis told Branch that tensions still remain on the campus after the killing of 2nd Lt. Richard Collins, a black Bowie State University student who was stabbed in May 2017 while he waited for an Uber. Sean Urbanski, a white former student at this university, has been charged with murder and a hate crime in Collins’s death, and is currently awaiting trial.

“They haven’t really been addressed,” he said.

After Collins’s death, the university instituted several reforms, including hiring a hate bias response coordinator and creating an online log to monitor hate bias incidents — something Branch brought up when discussing such incidents in residence halls. Of the 22 hate bias incidents reported on the log for this academic year, 11 took place in dorms.

Branch said hate bias incidents take on a different character when they happen in dorms rather than academic buildings, as these are places where a certain degree of security is generally expected.

Regardless of where an incident occurs, Branch said the first step should always be to consider the people who were affected and “signal institutional awareness of the issue,” which she said the hate bias log accomplishes.

Still, Branch said this university should anticipate conflict because “bad things are going to happen.”

“Campuses have to get better at resilience and holding that as part of the conversation and not, ‘Nothing bad should ever happen’ or, ‘What do we do to the person who did that thing?’” she said. “That can’t be where the conversation begins and ends.”

At the end of Branch’s forum — and all upcoming forums — participants had the chance to submit feedback about the candidate confidentially through an online form.

The next finalist will visit the campus for a forum on Friday. Due to the “confidential nature of the search process,” the name of the candidate will be made public just prior to their visit, university President Wallace Loh wrote in a campuswide email Monday.