Interview: Antoni Porowski on season three of ‘Queer Eye,’ his restaurant and more 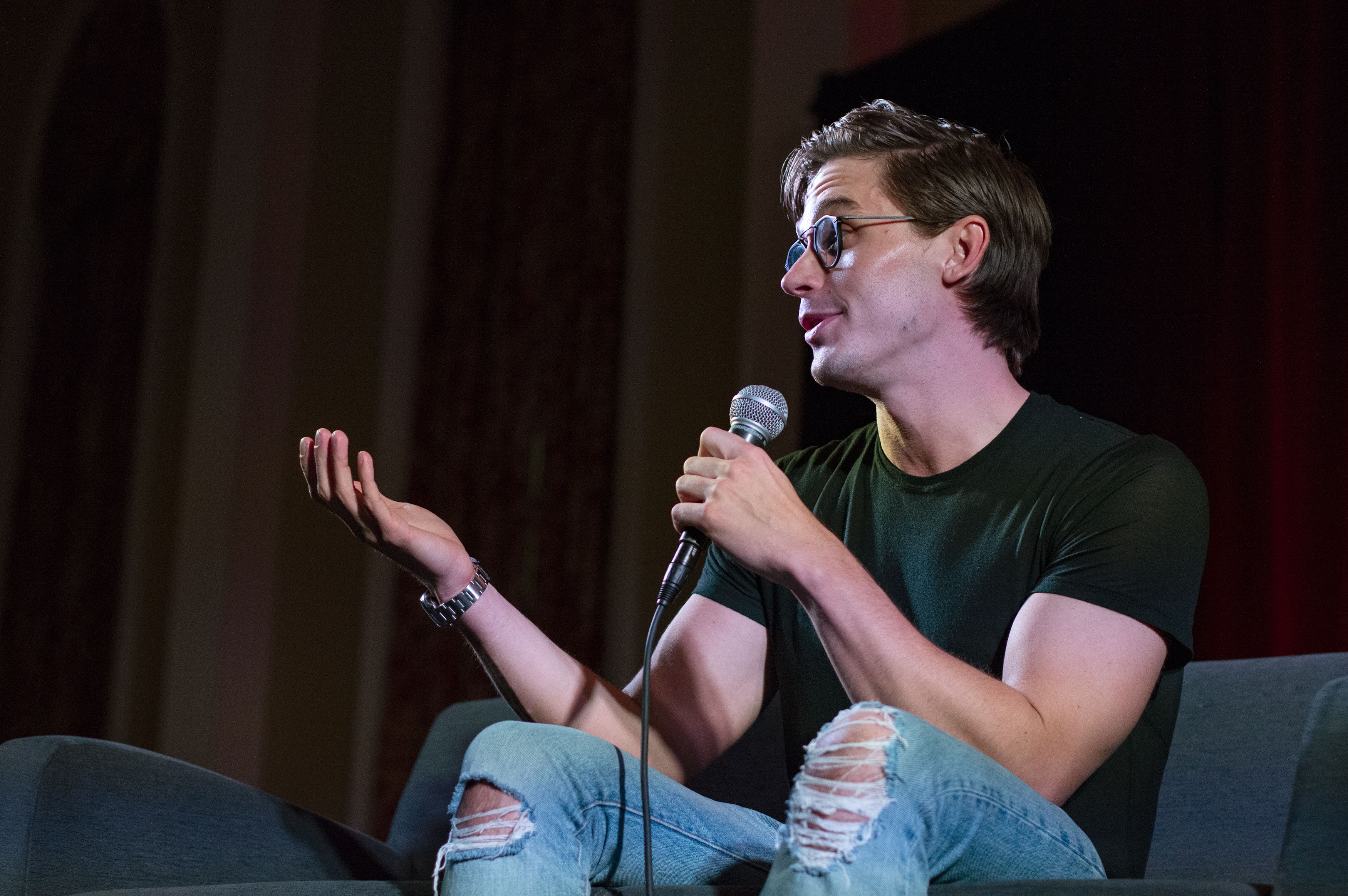 When Antoni Porowski appeared at Stamp Student Union on Tuesday night, he opened up to his audience at this university the same way he opens up to the clients on his show.

At the event hosted by SEE, audience members heard tokens of vulnerability from the star of reality makeover show Queer Eye, as he talked about the upcoming season, his fellow castmates and all that he loves about people and food. Some fans were lucky enough to personally ask him questions — or even come on stage for a cooking demonstration.

Antoni and the crowd were equally excited to talk about his role on the show trying to “turn the red states pink.” He shared his experiences with a fluid sexuality, changing mindsets on homosexuality in the rural south and being thrown from the position of a non-professional foodie to an expert on a reality show.

The crowd also got several tidbits about the show’s “fab five,” like everyone’s coffee order and what grocery aisle Antoni would be (it’s the dairy aisle). The event highlighted the great love that has been brought forth from the makeover show to audiences and cast members alike.

In an interview before the show, Antoni shared some more in-depth thoughts on his career and the upcoming season. This interview has been edited and condensed for clarity.

With season three right around the corner, what can we expect?

I said it for season two, and I think it still very much holds true for the upcoming season, but inclusivity and diversity continue to be the focal points of the direction that we’re headed with the show. We actually had conversations about the types of conversations we want to have. For example, myself as an immigrant, that’s an important story that I wanted to tell.

Also — much better balance with women to men! Because not only men need help. I think everybody does, or everybody needs help in general. Not just from us, like we’re lifesavers — sorry, I’m trying to be a humble Canadian.

How has it been different filming in Missouri instead of Georgia?

Temperature-wise, it was still very hot because we were there in the summer. I think it’s important for us to continue going across the county and go to different cities because those stories, that experience, what we go through — we really are so much more similar than we are different. It doesn’t really matter where you are, there are certain things that come into play.

What I loved about Atlanta was the fact that suddenly it felt like being black was normal in this country, which isn’t the case in a lot of cities that you think are very cosmopolitan and very inclusive but are not.

But that said, I love the food in Atlanta a lot. Kansas City was very good too, but a lot more barbecue-focused.

What keeps you busy when you’re on break from filming?

A lot of things. I used to say this like I was proud of saying I was a workaholic, like I thought it was a good thing, but I definitely realize now that it feeds into my addictive personality of always wanting to do too much. And I tend to get overwhelmed a little bit.

I have a restaurant in New York that I’m working on and we’re working on developing more locations throughout the city that’s like a health-fast-casual concept. I have a cookbook that’s coming out in the fall which is finally done which is really exciting.

I’m saying this out loud, and I’m realizing as I’m saying it — my focus is I really want to learn how to rest better and how to relax. Which is easier said than done when you drink as much coffee as I do.

If you were on the show, which one of your coworker’s services would you want?

The one that I’ve learned the most from is definitely, by far, Jonathan [Van Ness]. My face is breaking out now, so it doesn’t really look like it, but I didn’t wash my face with soap before the show came out. I still don’t wash my hair with shampoo very often, but I’ve definitely learned a lot from Jonathan. He’s the one that I still could learn a lot from.

[Skin care] just gives me 10 minutes where I connect with myself, and it’s self-care in the purest form where I’m just taking care of my own body. It’s the only time of the day where I really do that because I’m always running around. It’s important! We need a little moment to connect with ourselves!

What gave you the idea to make your restaurant, Village Den, so inclusive for people with different diets and allergies?

Coming from Montreal, which is such a diverse community and so multicultural and inclusive for the most part, I feel comfortable in that zone. I feel comfortable when there’s a lot of differences around me because I get to learn from them, so we wanted to do that with the restaurant.

And also, it’s an homage. I love American culture and the 1950s TV dinners. I ate very well as a kid and I always wanted those little Swanson microwavable things with the meatloaf and all that and I never got to have those as a kid. So we created versions of those that are a lot more healthy, whether they’re paleo or vegan or, like, fish sticks coated in macadamia nut crust. We added turmeric to it now to make them look more brown and cook them in coconut oil instead, and we stopped frying them.

I’m learning that the best feedback for any work I do — whether it’s on Queer Eye or the cookbook so far or the restaurant — is when I keep things personal, I’m able to make it honest. And that it’s something I can really get behind and be proud of as opposed to something that’s kind of gimmicky and fake that I can’t really support.

People always comment on how close the five of you seem on the show, how has that made it different from when you first started filming in the first season to now?

We didn’t know each other before the show started, and there was a moment during the chemistry testing where it was a lot of us that were being rotated and there was a screen being put up with photos and we would comment on it, and the five of us, when we were put into the room, we were literally completing each other’s sentences.

It’s kind of like family. I’ve gone through phases where I haven’t gotten along with my sisters and then when I’ve been very close, but they’re still family at the end of the day. And the five of us have experienced this really strange phenomenon of being thrust into public life on this show that carries out such an important message. And we get each other.

I love those guys. We just spent a bunch of time in Japan together and it was amazing. I’m so excited for that season, it’s really good.

Do you have any advice for University of Maryland students for being successful?

I’m going to try not to be too idealistic. It’s a very general one, but it’s one that I wish I would have told myself a little more when I was in my early 20s, because I was really trying to figure out what I needed to do, and I felt like what I was studying or what I was doing was going to be what I was going to do for the rest of my life.

Our directions can change, our passions can change. I had a psychology major. I really thought I was going to be a therapist. I really wanted to follow that path. I had a whole plan in my mind for it, but that’s not what ended up happening.

Just be gentle with yourselves — it’s a stressful freaking time. You’re studying your asses off, you have papers due all the time, you’re drinking a shit-ton of coffee, you’re probably not eating very well, because I didn’t eat well when I was a student. We ate like garbage! And we drank a lot!

Just be gentle with yourself. It’s a stressful time, between student loans and not seeing your family and loved ones. Find comfort and solace in these students. You’re all going through the same thing. You have that bond together that you get to share and find people that are your tribe, who only support you, not people who bring you down and find comfort in that.

And take a green tea bag, steep it for 30 seconds in hot water like Tan does, empty it into some full-fat Fage yogurt and put it on your face, wait until it crusts off and then just scrape it off and do it with your friends. Your skin will be nice and tight and glowing for the next day. Find little moments where you can actually enjoy things like that, I think that’s so important.

Because university really is the best time ever. I wasn’t the best student, I failed a bunch of classes and I was miserable for some of it, but I really wish I learned to enjoy the times I was sitting in the library, because it was so lovely.

CORRECTION: Due to an editing error, a previous version of this article incorrectly stated the interview was after the show. The article has been updated.