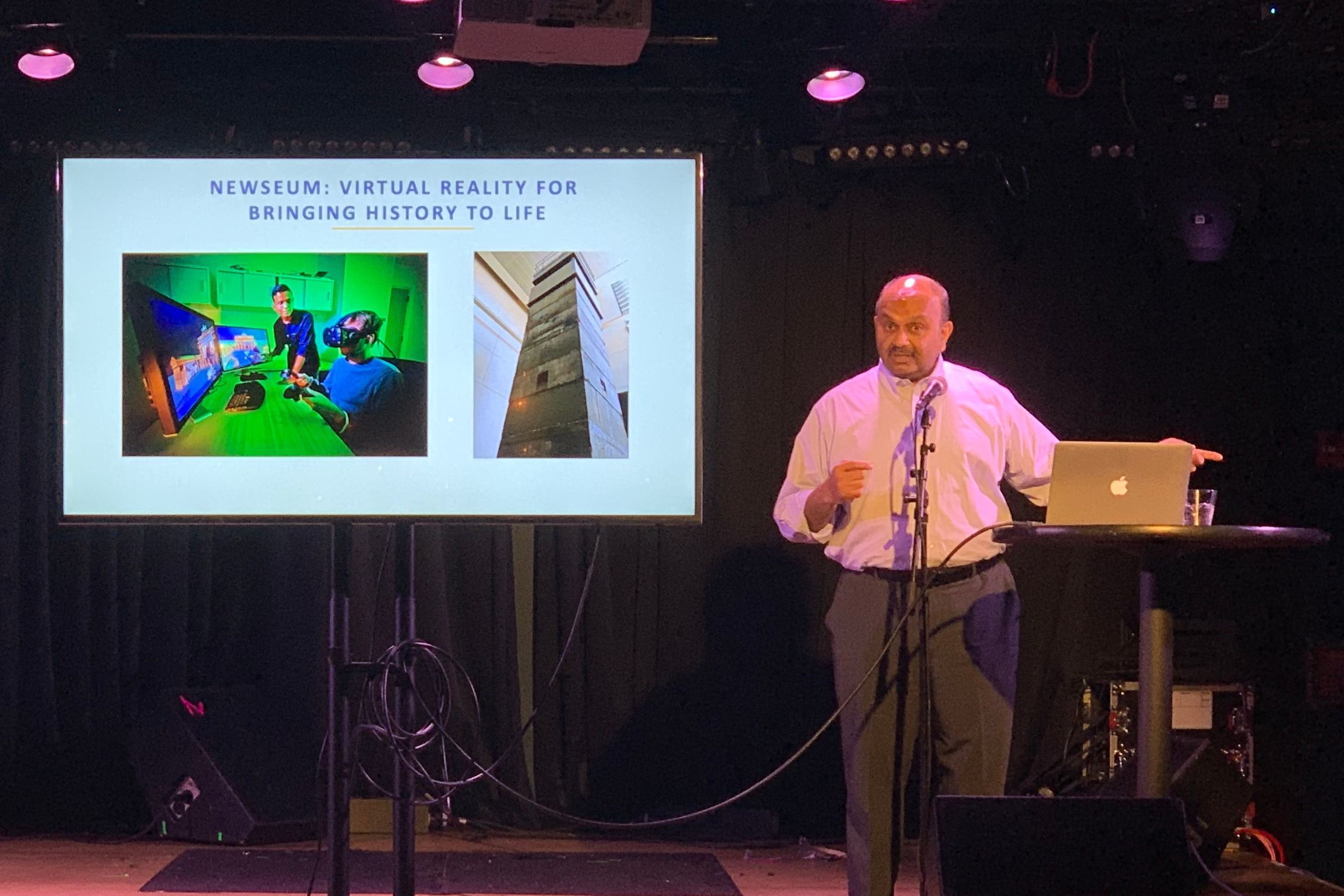 Amitabh Varshney, dean of computer, mathematical and natural sciences, offers some examples of new applications in virtual and augmented reality in fields such as medicine, e-commerce and policing at a "Science on Tap" lecture on Feb. 26, 2019. (Photo By Ryan Wu/For The Diamondback)

Combating implicit bias in police officers. Sending vital information about a car accident victim to the hospital before they arrive. Adding an interactive element to a museum tour.

These are some of the examples Amitabh Varshney used to illustrate the vast application of the burgeoning fields of virtual and augmented reality Tuesday night at the “Science on Tap” lecture series held each month at MilkBoy ArtHouse.

In one example, students who take a trip to the Newseum in Washington, D.C., may soon be able to learn about the history of the news business while wearing a VR headset. A system of beacons would be deployed on various museum artifacts to help guide visitors through the museum, even personalizing their tours based on their interests.

The use of AR and VR technology helps “bring artifacts back to life,” said Varshney, dean of this university’s computer, mathematical and natural sciences college.

“As you wear the headset, you can hear barking of the dogs, the turning of the guards’ lights that are trying to pinpoint your location,” he said. “It puts you in that moment, that time in history.”

Varshney also mentioned a collaboration between computer science faculty members and the R Adams Cowley Shock Trauma Center in Baltimore to help identify and treat medical conditions at the scene of an accident.

In the future, first responders wearing an AR headset would be able to relay information about a victim’s injury to a medical center and get feedback on possible treatments before the medevac arrives, Varshney said. This would be especially useful in rural areas where emergency times can be much longer.

“The first hour is the golden hour. It can make a difference between life and death,” he said.

Theresa Alexander, a computational biology doctoral student, said although she doesn’t read much about the latest technological innovations, the application of VR and AR to emergency medicine caught her eye.

“I’m interested in how AI can perform in these kinds of situations,” she said. “These learning methods can be applied to my research.”

Josh Gerhardt, a former student at this university, said his favorite application in AR and VR is gaming, the field with which it’s most often associated.

Gerhardt said the lecture gave him hope that these technologies could expand to other fields and help those in need. “Being able to unlock the tech can provide exponential growth in so many areas,” he said. “It was such a cool experience being able to see this new reality.”

Shaun Howe, an atmospheric and oceanic science graduate student, said he’s most interested in how these technologies can be blended into classroom learning.

Varshney said although there aren’t currently many AR and VR applications, it’s still a potentially huge market given the increased processing power computers now have. A good example would be e-commerce giants like Amazon, which is already utilizing AR to show users how a product will fit when placed in their homes.

“A lot of interesting adoptions are happening this time around,” Varshney said. “There are so many opportunities to transform all the experiences around us [and] the technology for societal good.”