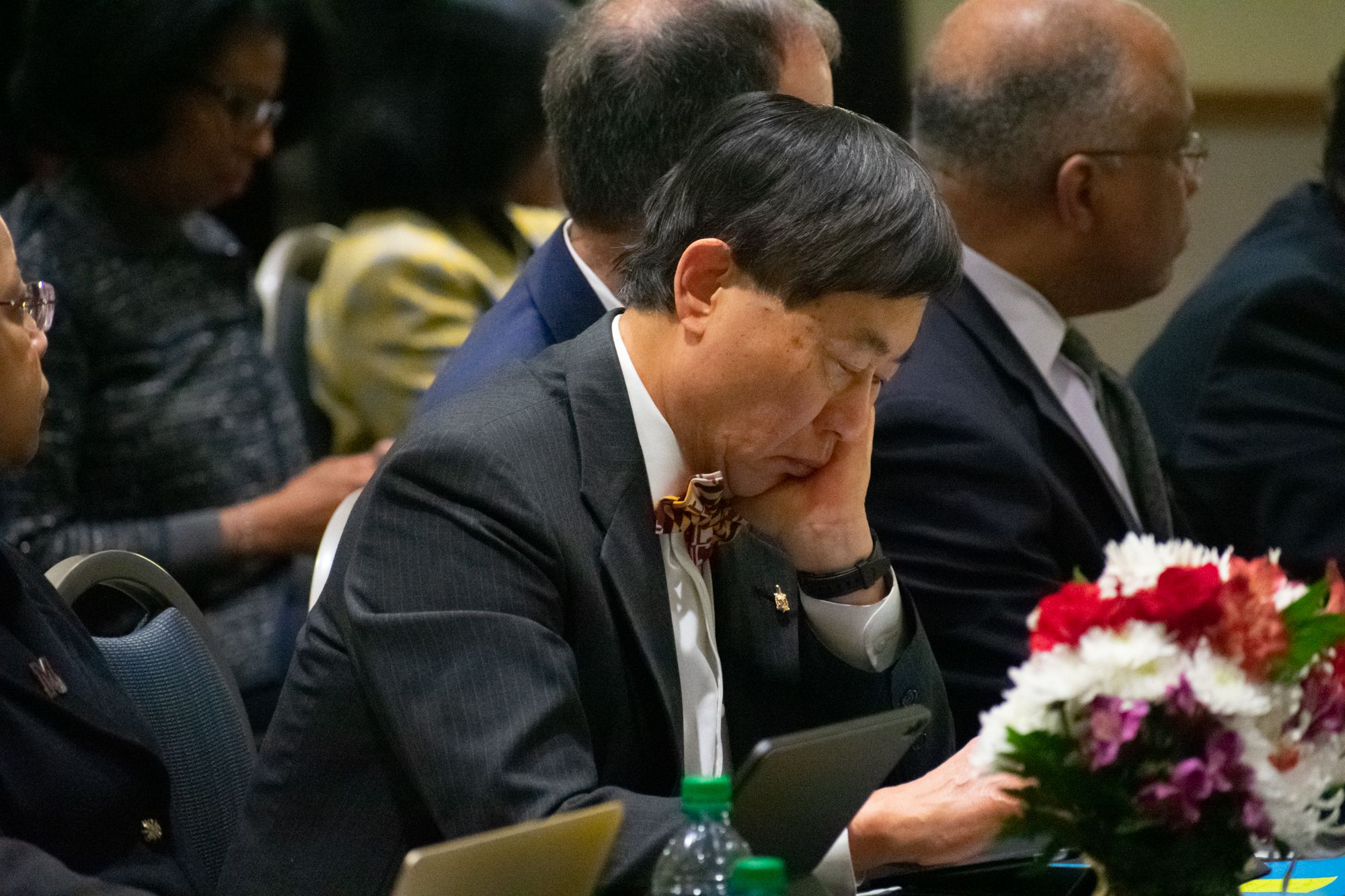 Wallace Loh at a Board of Regents meeting at Bowie State University on Feb. 22, 2019. (Elliot Scarangello / The Diamondback)

BOWIE, Md. — The University of Maryland has instituted the majority of the recommendations from the two investigations that stemmed from the death of Jordan McNair and is creating a panel to monitor their progress, university President Wallace Loh told the Board of Regents on Friday.

During a meeting in Bowie State University’s Student Center, Loh told the board that the university has fully implemented 18 of the 20 recommendations from the first report, which was released in late September and focused on the May 29 football team workout where McNair suffered fatal heatstroke. The report lists 27 recommendations, seven of which came from the “Head Football Athletic Trainer.”

Loh also said the university has put into place “approximately” 16 of the 21 recommendations from a second investigation into the broader culture of the program.

Loh did not specify which recommendations had been implemented and which hadn’t. The board took control of both investigations shortly after they were commissioned, a move many criticized as an overstep of its powers.

While Loh provided the board with a “very casual” update regarding the university’s progress, he said he’s creating a panel to conduct a review and then report officially to the board, which sets policy for the University System of Maryland’s 12 member institutions.

The panel, Loh said, is expected to hold its first meeting on this university’s campus in about two weeks.

He named six people who he said would serve on the panel, including William “Brit” Kirwan, a former president of this university and former USM chancellor; Vernon Davis, a former Maryland football player and current NFL tight end; and David Williams II, former vice chancellor for athletics and university affairs and athletics director at Vanderbilt University.

Williams, however, died Feb. 8, according to a Vanderbilt press release.

The university was not available for comment Sunday regarding William’s status as a member of the monitoring group.

“We’re going to be very transparent, we’re going to post that and we’re going to hear presentations from our athletic staff and others and then they will assess how well we are implementing this and report to you,” Loh said.

Loh also said he has convened a national panel of sports medicine experts that will report to the monitoring group but did not provide names.

“Some of these things did not happen overnight,” Loh said. “I think we are well on our way that hopefully by — I don’t know — by summer or so, we will have in place a program that will ensure the health and safety of students.”

The university contracted Dr. Rod Walters in June to lead the first investigation, which found athletic trainers failed to recognize the severity of McNair’s condition and did not treat it properly. Cold water immersion, which is used to treat heatstroke, has 100 percent success in preventing fatalities when performed quickly.

The second investigation — which came in response to ESPN reports that described the football team’s culture as “toxic” — cost $1.57 million and found widespread abuse in the program but recommended then-head coach DJ Durkin and athletic director Damon Evans keep their jobs.

Despite the recommendation of the board, though, Loh fired Durkin a day later.

At Friday’s meeting, Loh referenced new football coach Mike Locksley’s introductory press conference on Dec. 6 as an example of how the “the climate is changing” in regards to the culture surrounding Maryland football.

During that press conference, Locksley — whose son Meiko was killed in a shooting in September 2017 — spoke to Martin McNair, the father of Jordan McNair. The new coach talked about the bond they both shared after the sudden loss of their sons.

“I want to create the right culture and environment, and winning will follow,” Locksley said during that press conference. “Every decision I make moving forward as the leader of this family will put the health, welfare and safety of the student-athletes first, like I would my own children.”

Loh said Friday that this moment “began the change in culture.”

“We can talk all about changes in policies and practices and procedures, but it is people,” Loh said. “If that person has that kind of commitment, I believe we will effect change.”