No. 24 Maryland men’s basketball pulls away from Ohio State for 72-62 win 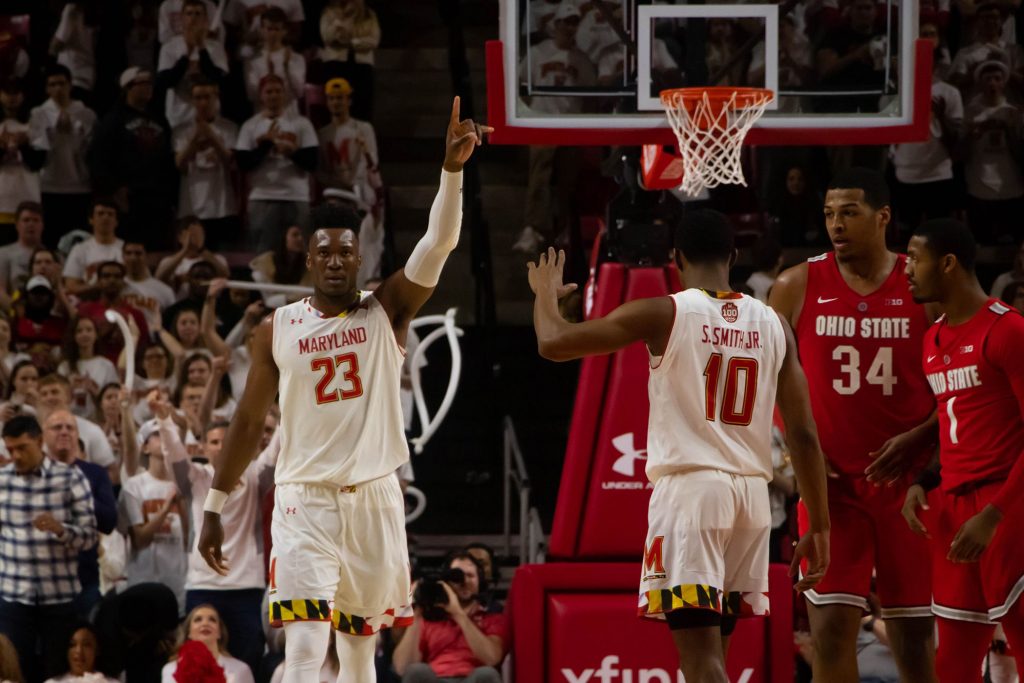 After gathering an offensive rebound with three minutes remaining against Ohio State on Saturday, Maryland men’s basketball forward Bruno Fernando’s dribble took him too far beneath the basket.

But it drew the Buckeyes defense dangerously deep, too, and guard Aaron Wiggins noticed. Fernando calmly wrapped a pass around his defender to Wiggins, who rose for a one-handed slam that qualifies as thunderous by his modest standards, putting the Terps up nine points and bringing Xfinity Center to its feet.

Ohio State had pulled within two points about two minutes earlier, but the Terps’ balanced attack and strong defense pushed them to a 72-62 victory in the first of three home games over their final four regular-season matchups.

“We’ve worked really hard on what we do after an offensive rebound,” Turgeon said. “So it was great to see Aaron cutting [and] Bruno made the play.”

Both Maryland (21-7, 12-5 Big Ten) and Ohio State (17-10, 7-9) were without their starting point guards Saturday. Buckeyes guard C.J. Jackson missed out with a shoulder injury, and Eric Ayala played 10 uneventful minutes before leaving due to illness.

“Some of my worst losses in my career was when the other team’s point guard hasn’t played, because everyone relaxes,” Turgeon said. “Another guy stepped up today in [Woods’] absence … and Serrel stepped up for us.”

Maryland’s first lead came at the 13:02 mark in the first half, when 3-pointers from Wiggins and guard Anthony Cowan were the first real signs of life following slow opening sequences from both sides. The Terps separated about six minutes later with a 7-0 run powered by five of Cowan’s game-high 19 points.

Cowan had some uncharacteristic shooting nights in recent weeks, but as the team’s only contributing upperclassman, he says he considers it his responsibility to prevent the disappointing finishes that befell the Terps during his first two seasons.

“The regular season is far from over,” Cowan said. “It’s our job to put our foot on the pedal.”

His five-point burst forced an Ohio State timeout, and the Buckeyes came out with a 6-0 run that was the first of a few moments the visitors found the answer they desperately needed to keep the game within reach.

“Once we went on a little scoring run,” Cowan said, “we just couldn’t get that one stop.”

Smith Jr. and Cowan helped make up for Fernando being shut out in the first half. The forward missed both of his shots in the first 20 minutes but had three assists and played great defense on Ohio State forward Kaleb Wesson all afternoon, keeping him to seven points on 3-for-12 shooting.

As he has done time and time again during his breakout sophomore campaign, Fernando came out of the locker room firing after a slow opening period. The 6-foot-10 forward recorded seven of the team’s first nine second-half points and finished with 14 on seven second-half shots.

“That was the gameplan coming into the second half,” Cowan said. “We had to get him going. And that’s what we did.”

Fernando, Cowan and Smith Jr. combined for an 11-0 run — interrupted but not stopped by a timeout from Ohio State — midway through the second period to balloon Maryland’s lead to 16 with 11 minutes to play.

The Buckeyes went nearly six minutes without a score over that stretch, but a few minutes later, they nailed three triples in a little over 90 seconds for a 9-0 run that cut Maryland’s lead to 57-55 with 5:27 remaining.

The Terps were without a field goal for nearly five minutes at that point, but three free throws from Smith Jr. and two more from Morsell re-established the comfortable lead they had owned for most of Saturday’s second half. That set the stage for Wiggins’ throwdown, polishing off an impressive all-around victory in the hunt for a top-four seed in the conference tournament.

“[Maryland] certainly made enough plays there when it was cut to a one-possession game,” Ohio State coach Chris Holtmann said. “That stretch was critical for them.”