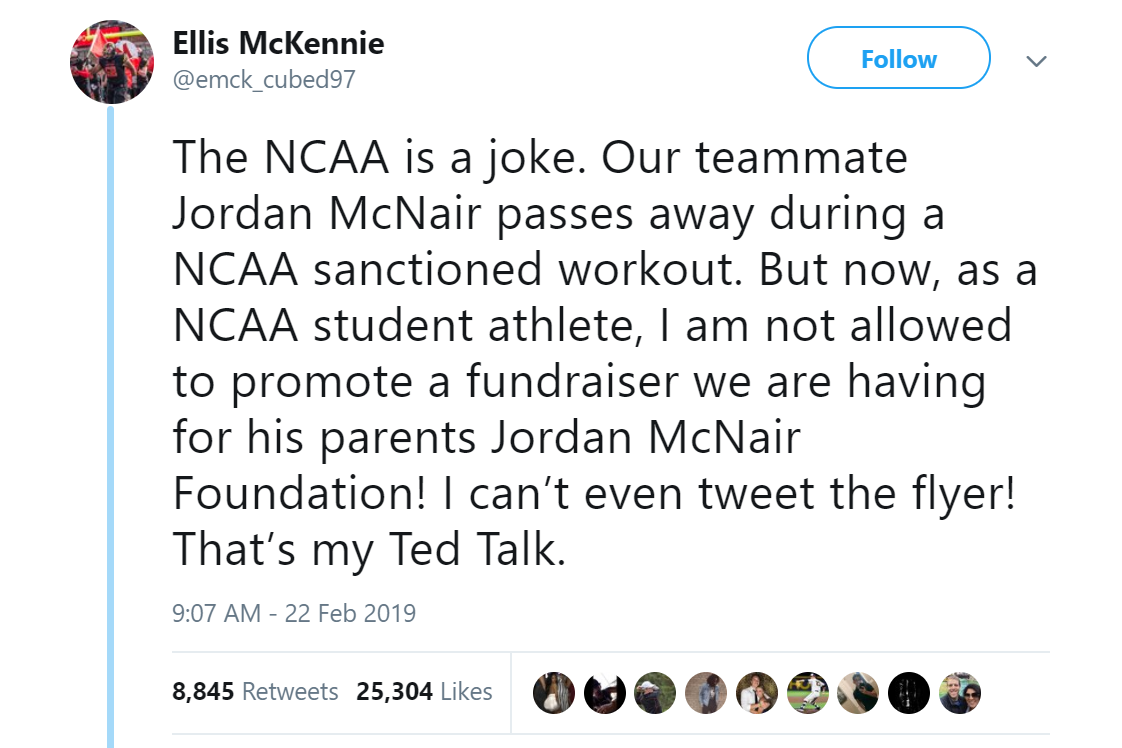 Maryland football offensive lineman Ellis McKennie tweeted on Friday that he’d been prohibited from promoting a fundraiser for the Jordan McNair Foundation, before retweeting a photo of a flyer for the fundraiser.

“The NCAA is a joke,” he tweeted. “Our teammate Jordan McNair passes away during a NCAA sanctioned workout. But now, as a NCAA student athlete, I am not allowed to promote a fundraiser we are having for his parents Jordan McNair Foundation! I can’t even tweet the flyer! That’s my Ted Talk.”

The NCAA is a joke. Our teammate Jordan McNair passes away during a NCAA sanctioned workout. But now, as a NCAA student athlete, I am not allowed to promote a fundraiser we are having for his parents Jordan McNair Foundation! I can’t even tweet the flyer! That’s my Ted Talk.

Shortly after his first tweet, McKennie followed up with a picture of an unofficial flyer for the fundraiser. He wrote that this version of the flyer was “NCAA approved,” and thanked the school’s compliance office.

NCAA approved flyer! Still must bring the Chipotle one for the fundraiser!!! Thank you @TerpsCompliance pic.twitter.com/y7oo530hVY

McNair, a rising sophomore offensive lineman, died last year after suffering heatstroke at a team workout. In the wake of his death, his parents started the Jordan McNair Foundation to give other young athletes tutoring and coaching and provide them with scholarships.

This Sunday, the foundation is holding a fundraiser in conjunction with the Chipotle in the College Park Shopping Center. When customers present a flyer for the promotion, or indicate that they support the effort, the foundation will receive 33 percent of the proceeds from their order.

Under NCAA bylaws 12.5.1.1 and 12.5.1.1.2, athletes are unable to promote the event because Chipotle is a co-sponsor. Bylaw 12.5.1.1.2 defines a co-sponsor as a “commercial establishment” that “either advertises the presence of the student-athlete at the commercial location or is involved directly or indirectly in promoting the activity.”

Athletes are allowed to promote fundraisers that direct 100 percent of their proceeds to charity.

The university’s compliance office received a legislative relief waiver for the unofficial flyer, which focuses on the Jordan McNair Foundation itself and not on Chipotle as the co-sponsor of the event.

In a statement, athletic department spokesperson Jessica Jennings said the compliance department “worked with the NCAA to ensure that our student-athletes could assist in promoting the event.”

McKennie’s original tweet has received more than 30,000 likes and 10,000 retweets. One of those was Student Government Association President Jonathan Allen, who responded to McKennie with a picture of the official flyer.

“I express similar frustration that the NCAA regulations wouldn’t allow something as basic as this,” Allen said.

McKennie appeared in all 12 games — three of them starts — as a redshirt junior in 2018. He’s expected to compete for a larger role this season after the departure of starters Brendan Moore, Derwin Gray and Damian Prince.

After McNair’s death, McKennie has become an outspoken activist. When university President Wallace Loh reinstated DJ Durkin as football coach in October after an investigation found him partially responsible for abuse in the program, McKennie was one of several players to criticize the decision. He expressed his gratitude after Loh reversed course and fired Durkin a day later.