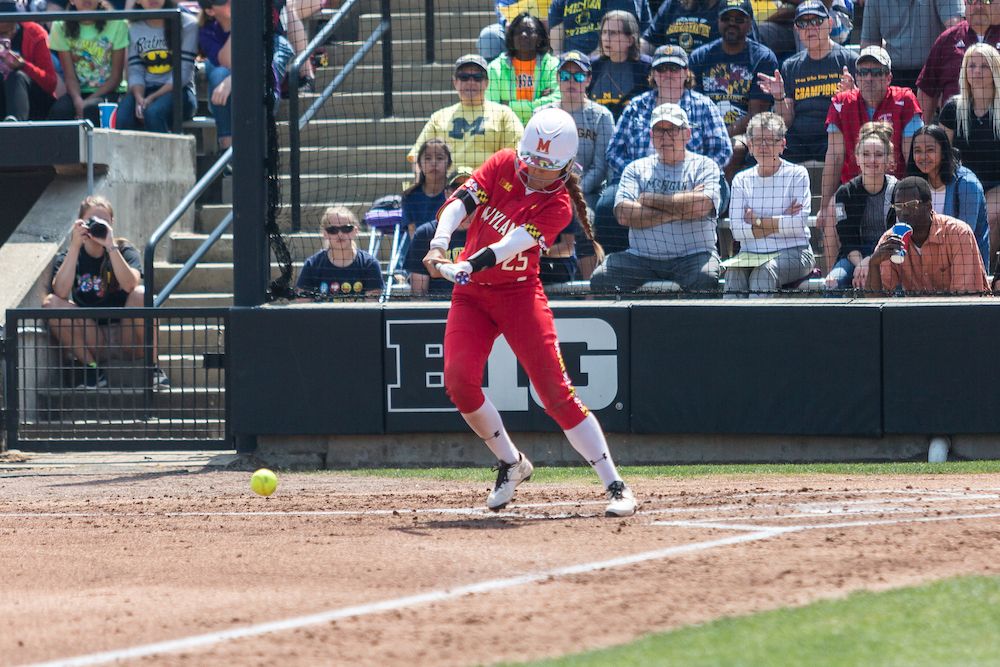 Ahead of the Maryland softball team’s matchups with Nicholls State and Houston at the Houston Invitational, coach Julie Wright said her team needed to leave fewer runners on base.

Against the Colonels in the first of two games Friday, the Terps did just that. Redshirt freshman Victoria Galvan earned her first career start in the circle, and despite allowing an early 1-0 lead, that would be the only run Nicholls State sneaked past Maryland’s pitchers.

In the first two innings, the Terps had little success at bat, but that all changed when second baseman Taylor Okada stepped up to the plate. The freshman’s single to left field marked the beginning of a string of hits for the Terps in the third inning that gave them their 2-1 lead — one that would last the entirety of the game.

Sophomore center fielder JoJo McRae got on first, advancing Okada to third on a fielding error. Another error by the Colonels allowed third baseman Anna Kufta to reach second base. That set the stage for catcher Gracie Voulgaris, who drove McRae in for the first Maryland run of the day.

With Kufta sitting at third, first baseman Sammie Stefan singled up the middle and Kufta scored to give the Terps their one-run lead.

Last week at the Trojan Classic, Maryland beat Murray State twice but struggled against Troy and No. 9 Alabama. Wright was prepared for another tough matchup coming into the Houston Invitational, but her focus was on improving her own team rather than Nicholls State and Houston.

“For us, it’s just about taking care of what we do on the field,” Wright said Thursday. “If we play our game and do our thing, we’re going to be fine. And we can compete.”

Her team completed the Friday sweep, knocking off Houston in the nightcap, 4-2.

Though Houston was first to put a run on the board, senior pitcher Sydney Golden kept the Cougars from getting any big plays against the Terps.

And the very next inning, designated player Micaela Abbatine hit a home run — her first with Maryland since transferring from North Carolina — to tie the game up at one.

Golden, who finished the game with four strikeouts, got two in the bottom of the third. But Houston was still able to get one runner home to establish a 2-1 edge.

Following quiet fourth and fifth innings, a single from pinch-hitter Taylor Wilson led off the sixth. Senior infielder Bailey Boyd clobbered a two-run home run later in the frame to give the Terps a 4-2 lead and secure the second win of the day.

So, after two convincing performances from Maryland’s pitchers combined with timely hitting, the Terps will face University of Louisiana: Monroe at 10 a.m. Saturday and will rematch Houston at 5:30 p.m., looking to extend its winning streak.