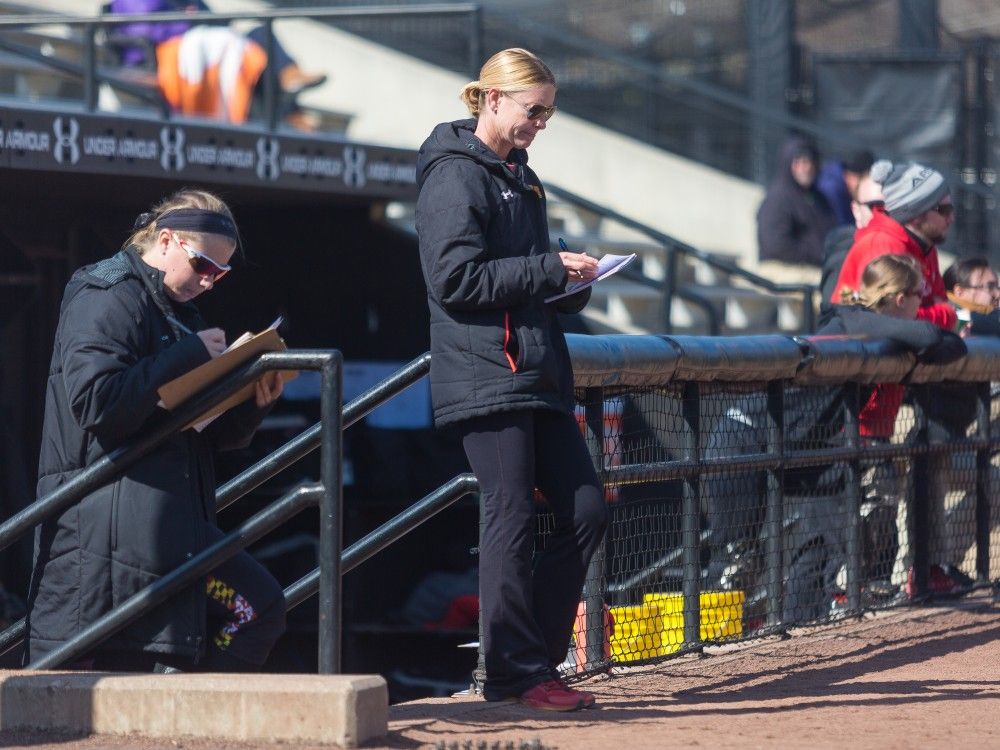 Victoria Galvan stepped into the pitcher’s circle for her first time with Maryland softball — an unfamiliar spot for her, in a key moment.

The redshirt freshman transfer played sparingly at South Carolina as a utility player and reserve pitcher, yet she was called upon in her first outing as a Terp, pitching against Murray State with her team up one run.

“It was nerve-wracking obviously at first going in,” Galvan said. “But after getting some learning experiences in, I felt more comfortable.”

Galvan’s growing confidence on the mound Friday translated to the scoreboard, as she stymied the Racers’ lineup en route to allowing only two hits and zero runs in four innings. Maryland parlayed her effort to a 6-3 season-opening win over Murray State, and she was credited with her first win as a Terp.

Galvan was a letter winner all four years of high school, and her success there — as well as travel-team experience with the Pennsylvania Chaos — led her to commit to the Gamecocks. In Columbia, she learned a valuable lesson: patience.

Galvan committed to South Carolina before her former travel teammate Kelsey Oh did, but it was Oh who stepped onto the mainstage. In her rookie season, Oh earned a team-best 1.92 ERA and 135 strikeouts and finished with a 14-5 record while Galvan watched from the dugout.

“Whenever you get a transfer that didn’t play a lot at their first institution, they’ve got a little chip on their shoulder,” coach Julie Wright said. “They’re out to prove themselves.”

The Terps, like any team, are always in need of pitching talent. And from one look at Galvan, Wright knew she was going to be “a beast” when she got experience and time to develop.

At Maryland, Galvan will get a chance to develop and get over the nerves she faced on the mound against Murray State. She’s already made an impact off the field, cementing herself as a personality on her new squad and quickly earning the title of team comedian.

“[Victoria] is probably one of the most hysterical kids I’ve ever been around,” Wright said. “She’s really lightened us … and brings that joyous, sort of, hilarious tempo about her, and that’s been really nice.”

“I dealt with a lot of adversity at North Carolina,” Abbatine said. “Just using that to propel me forward here and keep a positive attitude if things do go wrong here.”

Though Abbatine finished the opening tournament with only two hits, Wright feels that her impressive skill set will show itself as she continues to gain experience and face live pitching. Abbatine is still adjusting to the hand signs that Maryland uses, since North Carolina relied on a card system, but the off-the-field transition has been as smooth as can be.

Both Abbatine and Galvan said the team welcomed them with open arms from their first day, and they fit right into the “vibe” of Maryland softball.

“I feel like I’ve been here for the past two years, and that feels awesome,” Abbatine said. “The team dynamic is just so different from what I come from.”