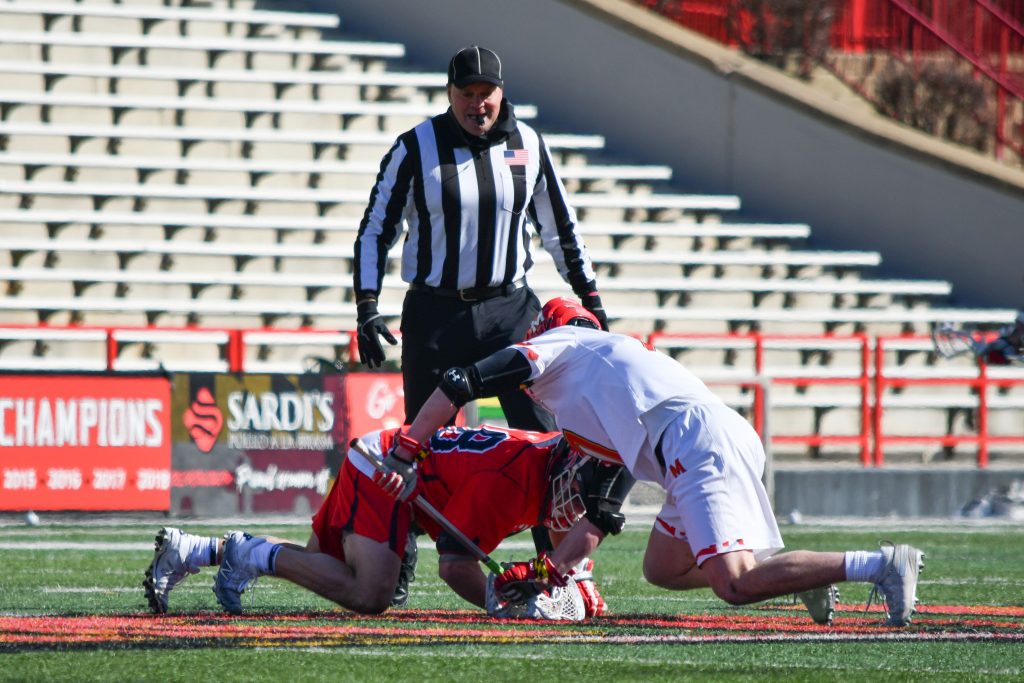 In his first 14 trips to the faceoff X on Saturday, Maryland men’s lacrosse’s Austin Henningsen found nothing but success. But the faceoff specialist’s 15th draw was most critical.

As he stepped up to grapple with Richmond’s Ryan Murray — the Terps’ advantage reduced to one goal with 2:01 remaining after a fourth-quarter implosion — Henningsen ripped the ball left and flipped it to midfielder Wesley Janeck to secure possession. Maryland ran down the rest of the clock to survive an early-season upset scare.

Henningsen and Justin Shockey, the Terps’ experienced faceoff specialists, provided an advantage over the Spiders. And with the game on the line, Henningsen’s 15-for-15 day proved imperative to ensure a 2-0 start to the season, offering extra possessions for the attack to build a lead capable of withstanding Richmond’s late surge.

“We really felt like, special team-wise, those were areas that we really wanted to see if we could win those battles,” coach John Tillman said. “We hoped that with our two-headed monster there, that maybe we could do well.”

Richmond lost Garrett Smith, its most experienced faceoff specialist, to graduation and relied on a trio of players with a combined 167 faceoffs taken in their careers. By contrast, Maryland’s two specialists, Henningsen and Shockey, have combined to take a career 989 faceoffs, winning 526 of them.

Henningsen and Shockey combined to win 20 faceoffs Saturday, while Richmond secured three. That helped Maryland stake an early lead and control the majority of the possession during the first three quarters.

Behind Henningsen in the first half, Maryland controlled possession and took advantage with eight goals, five of which came from attackman Jared Bernhardt.

[Read more: In his 5th year of college, Danny Dolan is finally a starter for Maryland lacrosse]

The extra possession time in the first 30 minutes helped the Terps establish a fast start, which Bernhardt said was a priority following last week’s slow production against Bucknell and in preseason scrimmages.

The attack also got extra opportunities to decipher the Spiders’ defensive alignment and find the best way to score against it.

“It’s amazing to have the flow and the rhythm coming from Austin,” midfielder Bubba Fairman said. “Once we get the possessions, we see their defense. We get all this extra time just to see how the defense is rolling, how they’re sliding, and then recovering and everything. So it really helps us out, especially later in the game.”

At halftime, Tillman said the coaches contemplated whether they would stick with Henningsen’s hot hand or give Shockey the faceoff work in the second half — just like they did against Bucknell.

Ultimately, Tillman deferred to assistant coach Tyler Barbarich, who coaches the faceoff specialists, and went with Shockey to start the second half.

In his opportunities, Shockey won 5-of-8 faceoffs, a clip that Tillman said most faceoff specialists would take. But with four minutes left in the fourth quarter, and Richmond suddenly within two goals, Tillman turned back to Henningsen.

After going 13-of-13 in the first half, Henningsen won his last two draws to finish with a perfect mark. Although Maryland didn’t score after either of them, the attack used the clock and survived the mounting pressure.

In the end, Maryland’s presumed advantage came to fruition and allowed them to hang on for the victory.

“We just kind of looked at the numbers and felt like there was a potential for an advantage,” Tillman said, “and listen, we needed every single one of them today.”