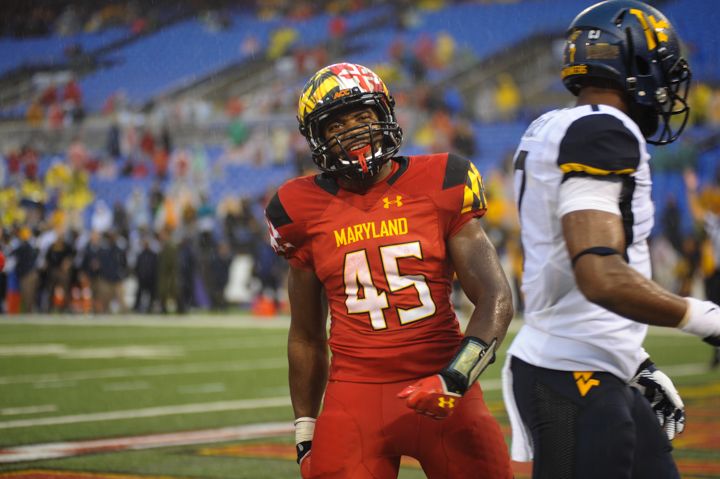 Running back Brandon Ross celebrates after scoring a touchdown as the Terps shut out West Virginia 37-0 on September 21, 2013 at M&T Bank Stadium in Baltimore.

When you think of former Terps playing professional football, you most likely think of Maryland’s current crop of players in the NFL. They range from DJ Moore, who just finished his rookie season, to Vernon Davis, who has been plying his trade as a tight end since 2006.

Now, there’s a new professional football league with several Terps playing in it: the Alliance of American Football. The league, which began on Saturday, looks to provide people with American football to watch from the end of the Super Bowl in February to start of the preseason in August.

One team, the Birmingham Iron, will be of particular interest to Maryland fans. The Iron feature four former Maryland players on the team’s roster: Brandon Ross, Amba Etta-Tawo, Michael Dunn and Nick Novak.

Novak, a kicker, is the only one of the four to have played in a regular season NFL game. The 37-year-old appeared in 108 games, having spent the majority of his career with the Los Angeles Chargers. He made 82.1 percent of his career field goals in a career spanning from 2005 to 2017.

In 2015, Ross was a serviceable running back for Maryland during its dreadful 3-9 season that included the firing of Randy Edsall. He ran for over 100 yards four times, including 173 yards against Rutgers to save the Terps from a winless Big Ten campaign.

Ross will be competing for playing time with Trent Richardson, the third overall pick in the 2012 NFL draft who became one of the most famous busts in recent memory with the Cleveland Browns.

Etta-Tawo spent a trio of seasons with Maryland, grabbing 61 receptions for 938 yards and three touchdowns. He transferred to Syracuse as a senior and promptly managed to get 1482 yards on 94 catches while finding the end zone 14 times. His one year with the Orange could demonstrate that Dino Babers is a better offensive coach than Randy Edsall, but I don’t want to editorialize too much here.

Dunn was a fixture on Maryland’s offensive line during his time in College Park and was a starter for Maryland’s 2016 squad, which remains the last time the Terps made a bowl game.

While the Iron boast four former Terps, they are not alone in having former Maryland players, as the Arizona Hotshots have defensive back Dexter McDougle on their roster. McDougle played at Maryland from 2010 to 2013, and then appeared in 31 NFL games from 2014 to 2018.

If you can’t survive going from February to August without Stefon Diggs touchdowns and Yannick Ngakoue sacks, the AAF will be there and there’s already a team in Alabama you can root for. The Iron kick off their season Sunday at 4:00 p.m. against the Memphis Express and you can watch the four Terps in action on CBS Sports Network.