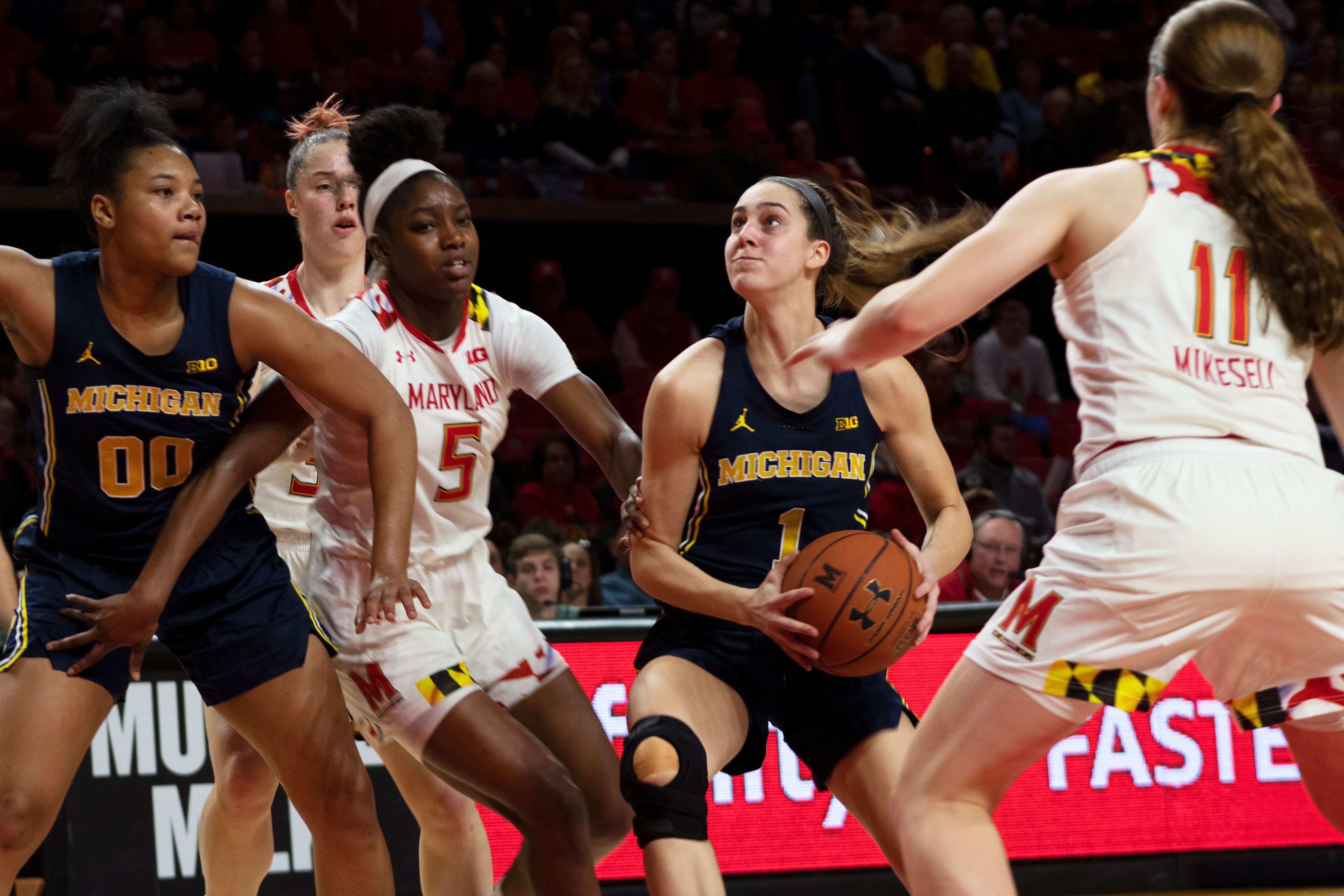 Guards Kaila Charles and Taylor Mikesell rush to cut off a drive during Maryland’s 83-69 win over Michigan at Xfinity Center on Jan. 12, 2019. (Frances Moyonero/The Diamondback)

When the Maryland women’s basketball team needed an 18-0 fourth-quarter run to secure a 77-61 victory in its Big Ten opener against Penn State, it was easy to write off the uncharacteristic performance over an expected conference bottom dweller as an off night.

But after a surprising 73-65 home loss to Rutgers on Dec. 31 and a hard-fought 75-69 triumph over Ohio State on Jan. 5, what may have looked like a single-game blip against the Nittany Lions was turning into a more sizeable shift.

For the first time since Maryland joined the Big Ten in 2014, the conference was no longer a pushover. After the Terps waltzed to a 61-7 league mark and three Big Ten titles in the previous four seasons, their adversaries finally appear to have risen to their level.

“It’s really competitive, which is great that every night we’re challenged,” guard Kaila Charles said after beating Penn State, 79-67, on Jan. 20. “We can’t take any night off, so I like the fact that it’s starting to level out and everybody’s giving their best.”

[Read more: Maryland women’s basketball dominated inside during its blowout win over Illinois]

While the Big Ten’s rising talent didn’t fully come to form until the 2018-19 season, the earliest harbingers of a more level playing field came last year.

Maryland won each of its first three Big Ten tournaments after joining the conference, but Ohio State finally unseated the Terps, 79-69, in the 2018 conference championship game. That came after the Buckeyes won the regular-season title outright for the first time since the Terps arrived in the Big Ten.

Coach Brenda Frese’s team still went 12-4 in conference play that season despite injuries and significant roster turnover, but after three years of dominance, it was clear Maryland wasn’t the top dog in its new conference.

The Terps still entered this season as the highest-ranked team in the Big Ten, at No. 9 in the preseason Associated Press poll. At No. 13, Iowa was the conference’s only other ranked team, so it looked as if Maryland would be rarely threatened.

But with four Big Ten teams slotted in this Monday’s rankings — down from a season-high six squads three weeks ago — it’s become clear that the Big Ten is more talented than it’s been in years.

“I think our league is stronger than it’s ever been,” Michigan coach Kim Barnes Arico said after losing to Maryland, 83-69, on Jan. 12. “We’re deeper than we’ve ever been. I think every night is an incredible challenge.”

From top to bottom, the Big Ten has showcased a new level of parity. Nine teams have a winning percentage of .600 or better — only seven were above that threshold last year — and even the heavyweights haven’t been immune to defeats to squads at the bottom of the standings.

Despite the talent upswing across the league, Maryland is still knotted in a tie for first place with No. 20 Rutgers. And after a 77-60 thrashing at the hands of then-No. 17 Michigan State, the Terps have reeled off five consecutive wins.

But before getting a chance to avenge its early-season defeat to the Scarlet Knights on Sunday, Maryland must first get past Northwestern (14-8, 7-4 Big Ten). And with the league better than it’s been in recent memory, the Terps are unlikely to take the matchup lightly.

“On any given night,” Frese said, “anyone can beat anyone.” 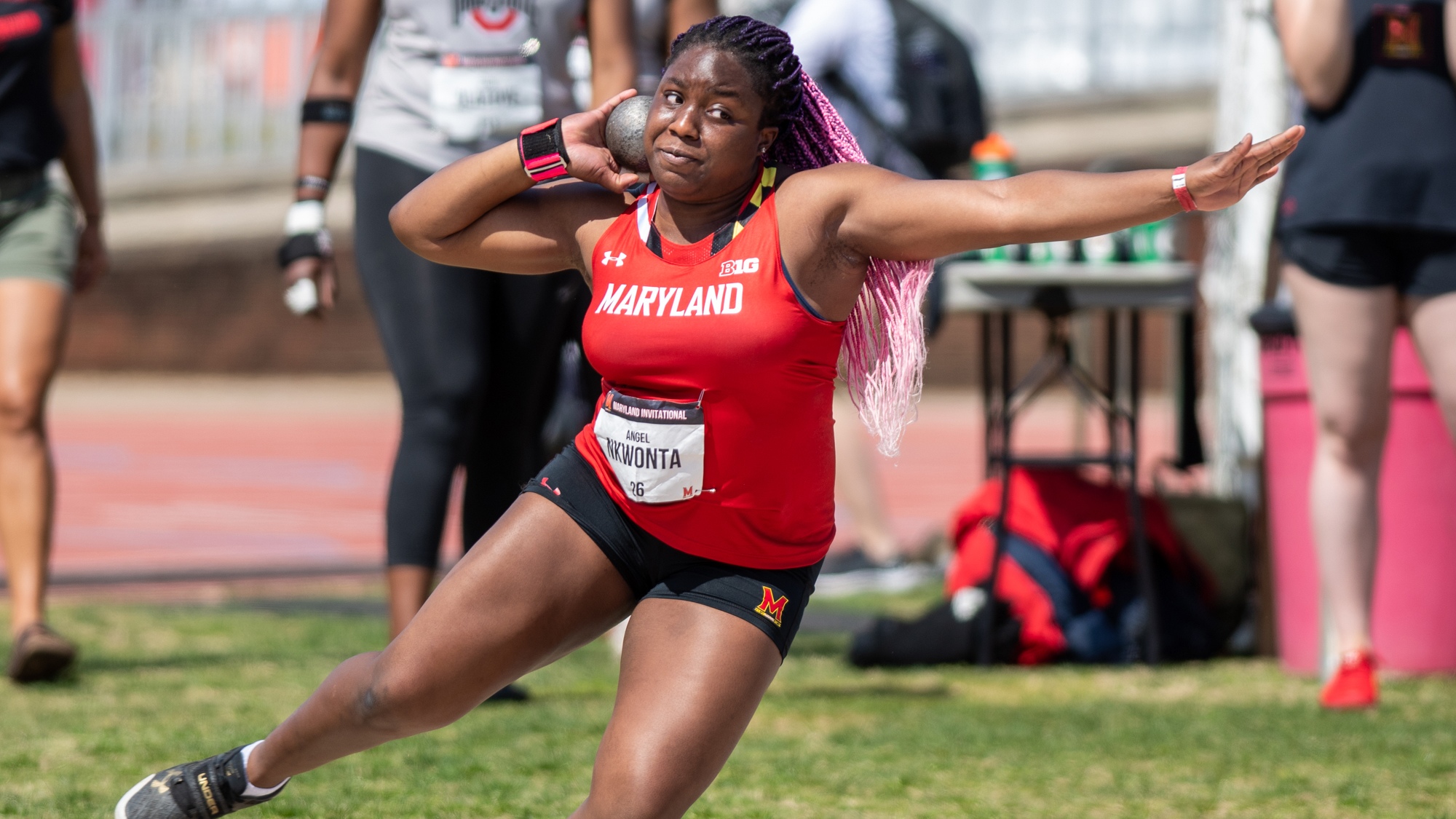