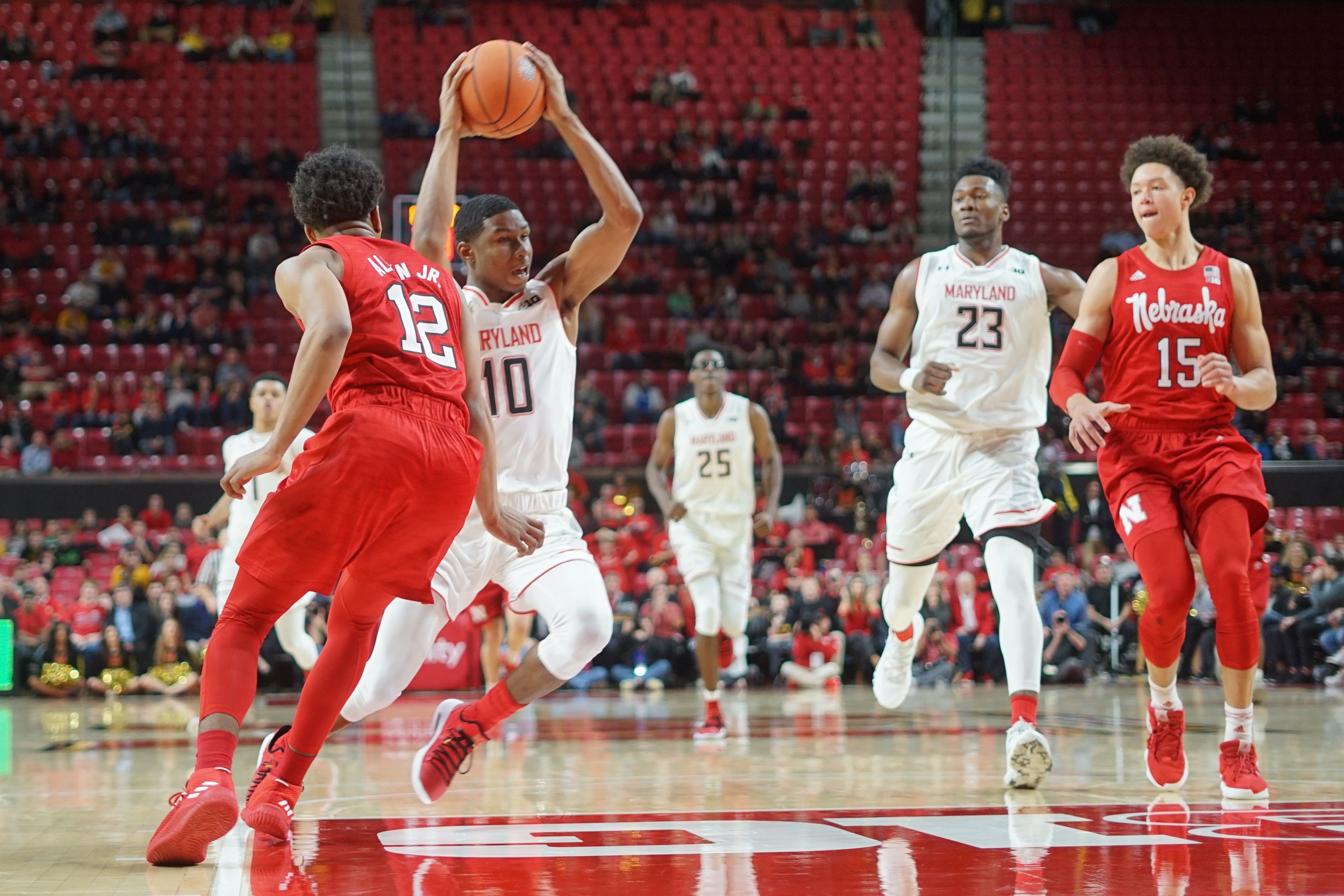 Guard Serrel Smith weaves around a defender in the paint during Maryland’s 74-72 win over No. 24 Nebraska at Xfinity Center on Jan. 2, 2019. (Corey Hart/The Diamondback)

Back on Jan. 2, Maryland men’s basketball kicked off its spin through the Big Ten conference with a 74-72 home victory over then-No. 24 Nebraska. Now, the Terps are traveling to Lincoln for a rematch with the Cornhuskers, who have gone 3-6 since that game. To get the skinny on how coach Tim Miles’ team has changed, we talked to Matt Hardesty of the Daily Nebraskan. Our conversation has been lightly edited for clarity.

Tim Miles has only made it to the NCAA tournament with Nebraska once so far in his time in Lincoln. If he doesn’t make it again this season, how hot do you think his seat is?

It’s fair to assume that if Nebraska doesn’t return to the NCAA tournament this season, Miles’ seat will be fairly hot. After he went 22-11 last season, tying the record for second-most wins in a season in school history, it was a telling sign that new athletic director Bill Moos gave him only a one-year extension. Basically, he rewarded Miles for his success but wants to see more consistency before making a long-term commitment.

The minimum expectation heading into this year was to make the NCAA tournament; whether the season-ending injury to Isaac Copeland two weeks ago changes the administration’s expectations remains to be seen. Miles has run a clean program with minimal discipline issues, and had two top-four finishes in the conference. That has helped him build enough goodwill to keep his job through some trying seasons in his time at Nebraska.

Unlike many other coaches on the hot seat, Miles has a fairly concrete blueprint for the future in place. He now relies on in-state recruiting and junior college players more instead of transfers, a far more stable option for consistent success. If this season doesn’t turn around by March, Moos will have an interesting decision to make about whether Miles is the right man for this program moving forward.

When Maryland and Nebraska first met, the Cornhuskers were No. 24 in the nation. Now, they’re on a five-game losing streak and finds themselves toward the bottom of the Big Ten. What’s changed between Jan. 2 and now?

That Jan. 2 meeting seems like ages ago for Nebraska. The injury to Copeland dealt a serious blow to the team, but their slide had started well before that. I think the biggest issue for the team has been their confidence, which has faded significantly since they entered January at 11-2. It felt like the team invested a significant amount of emotion and energy into their home game against Michigan State three weeks ago, and losing that has crushed them. In a conference as tough as the Big Ten, teams with shaky confidence will not win very many games.

James Palmer has played in almost 95 percent of Nebraska’s minutes in Big Ten play. What makes him so important to Nebraska that he rarely sits on the bench during conference play?

For starters, it’s depth. Nebraska’s bench is one of the least productive in the country, and they simply can’t afford to keep their leading scorer sidelined for significant periods of time. Also, Palmer commits the least amount of fouls on the team. Sometimes, when Miles would like to use his bench more and give Palmer some rest, other starters get in foul trouble and he has no choice but to keep him in the game.

According to Kenpom, Nebraska has gotten defensive rebounds at a lower rate than any other team in Big Ten play. Has the Huskers’ struggles to get defensive rebounds been particularly noticeable with the team currently 3-8 in conference play?

Nebraska’s rebounding struggles have been incredible frustrating for both the team and the fan base. But they have improved significantly in that department since Copeland went down. Part of the tradeoff for Copeland’s offensive skills was that they would have to deploy a very small lineup of three guards and two forwards, while most of the conference uses traditional centers.

Following Copeland’s injury, Miles inserted senior center Tanner Borchardt into the starting lineup, and sure enough, they outrebounded Wisconsin 45-37 and Illinois 50-36. Borchardt also had a career-high 12 points and 18 boards in the Illinois game, which was an encouraging sign. Still, Illinois and Wisconsin are statistically two of the worst rebounding teams in the conference. Going up against Bruno Fernando and Jalen Smith again will be a far more telling sign of how this new lineup rebounds.

The Huskers win if…

…They keep the rebounding margin within 10 and make their free throws and layups. Maryland out-rebounded Nebraska 38-28 in the first meeting, with nearly half of Maryland’s boards coming from Fernando. If they can keep him off the glass, it will help them control this game better. Nebraska has also significantly struggled at the free throw line in conference play, and that’s helped their opponents control the game. If Nebraska can make more of their high-percentage shots, they’ll win this game.

The Terps win if…

…They stay out of foul trouble and limit their turnovers. Having Fernando and Smith in the frontcourt is such a huge advantage for the Terrapins, and their 33 points in the first matchup basically willed the team to victory. Smith was just getting back to full health after battling an illness before then, and only played 25 minutes in that game. If they can get even more playing time out of him this time around, they should be in very good shape.