Maryland’s minimum wage should be a living wage 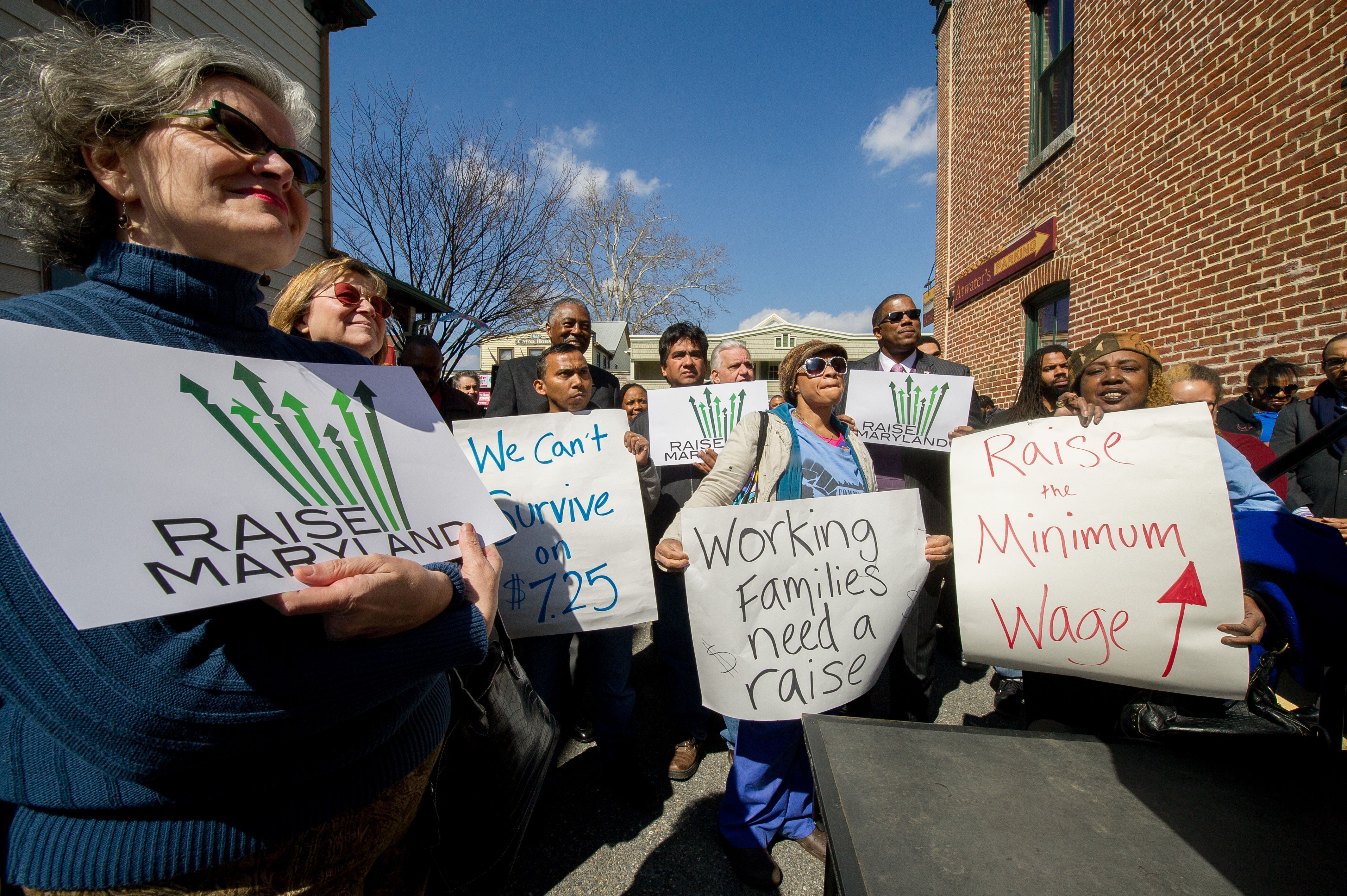 Protesters in Maryland rallying against the minimum wage. (Photo via Maryland GovPics/Flickr)

Within the past five years, the minimum wage has been debated, raised and now brought back to the forefront of Maryland politics. Heading into this legislative session, Maryland Democrats made it clear that raising the minimum wage to $15 per hour — up from the $10.10 minimum that was reached last year — is a priority. Del. Diana Fennell has introduced a bill that would gradually increase the minimum wage until it reaches $15 in 2023.

In addition to mandating the higher wage, the bill ties the minimum wage to inflation, meaning that the minimum wage will increase each year proportionately to the rate of inflation. This solves one of the many problems with the already egregiously low federal minimum of $7.25, which hasn’t increased since 2009. Thanks to the typical positive inflation rates associated with a stable economy, the minimum wage is now worth about $6.19 as measured in 2009 dollars.

Because no further legislation has been passed, employers can pay their workers almost a full inflation-adjusted dollar per hour less than the 2009 law permitted. Fennell’s proposed bill would correct this mistake, at least for the state of Maryland.

Predictably, the bill has faced hostility from Gov. Larry Hogan and conservatives in the Maryland General Assembly. Following the typical Republican playbook, Hogan dismissed the idea as a naive fantasy. Earlier in January, he told reporters, “It sounds really good to just, without any real discussion, say, ‘Hey, people should make more money, especially that are in their first job,’” before suggesting that raising the minimum wage would actually hurt low-income workers by making the state less competitive.

First, his invocation of people “working in their first job” is suspect but in line with someone who has certainly never needed to survive on the minimum wage. While it’s true that minimum wage workers tend to be young, about half are over the age of 25. Hogan is presumably trying to evoke the image of carefree teens working lifeguarding jobs, but the reality is that many minimum-wage workers are independent adults who need to support themselves on yearly earnings that, in Maryland, would work out to barely over $20,000.

Hogan and his Republican allies also overlook the dangers of a quintessential “race to the bottom,” whereby states compete to attract businesses by eroding worker pay and public spending. It’s dubious to make attracting businesses the primary goal of policy, and even so, it isn’t clear that raising the minimum wage would chase companies away or that lowering it would attract them. In the absence of a consensus about the effect of the minimum wage on business retention and unemployment within economic research, the only path forward is to make the minimum wage livable.

This debate touches on a general pattern in national politics: When progressives advocate any somewhat ambitious policy aimed at helping the working class in this country, conservatives mobilize to shoot it down as an impractical, expensive pipe dream. They weaponize flimsy economics and a false concept of “fiscal responsibility” to denigrate policies that go against the interests of the wealthy elite.

Rep. Alexandria Ocasio-Cortez’s (D-N.Y.) recent suggestion that the top marginal tax rate could be 70 percent illustrates this phenomenon well. Conservatives — and “centrists” like potential presidential candidate Howard Schultz — went into a frenzy, with House Minority Whip Steve Scalise (R-La.) writing on Twitter that Ocasio-Cortez’s plan is to take “70% of your income and give it to leftist fantasy programs.” But as Paul Krugman, an actual economist, explained well in The New York Times, the current top marginal tax rates are extraordinarily low — their optimal level is most likely above 70 percent.

In the same sense, don’t believe that a $15 minimum wage is impractical or undesirable. Advocates of the policy often say that if you work full time, you should be able to make ends meet. Everyone should have a decent quality of life regardless of how much they work, but raising the minimum wage would at least require employers to pay their workers a sum closer to a living wage.