No. 9 Maryland women’s basketball uses another late run to put away Michigan, 83-69 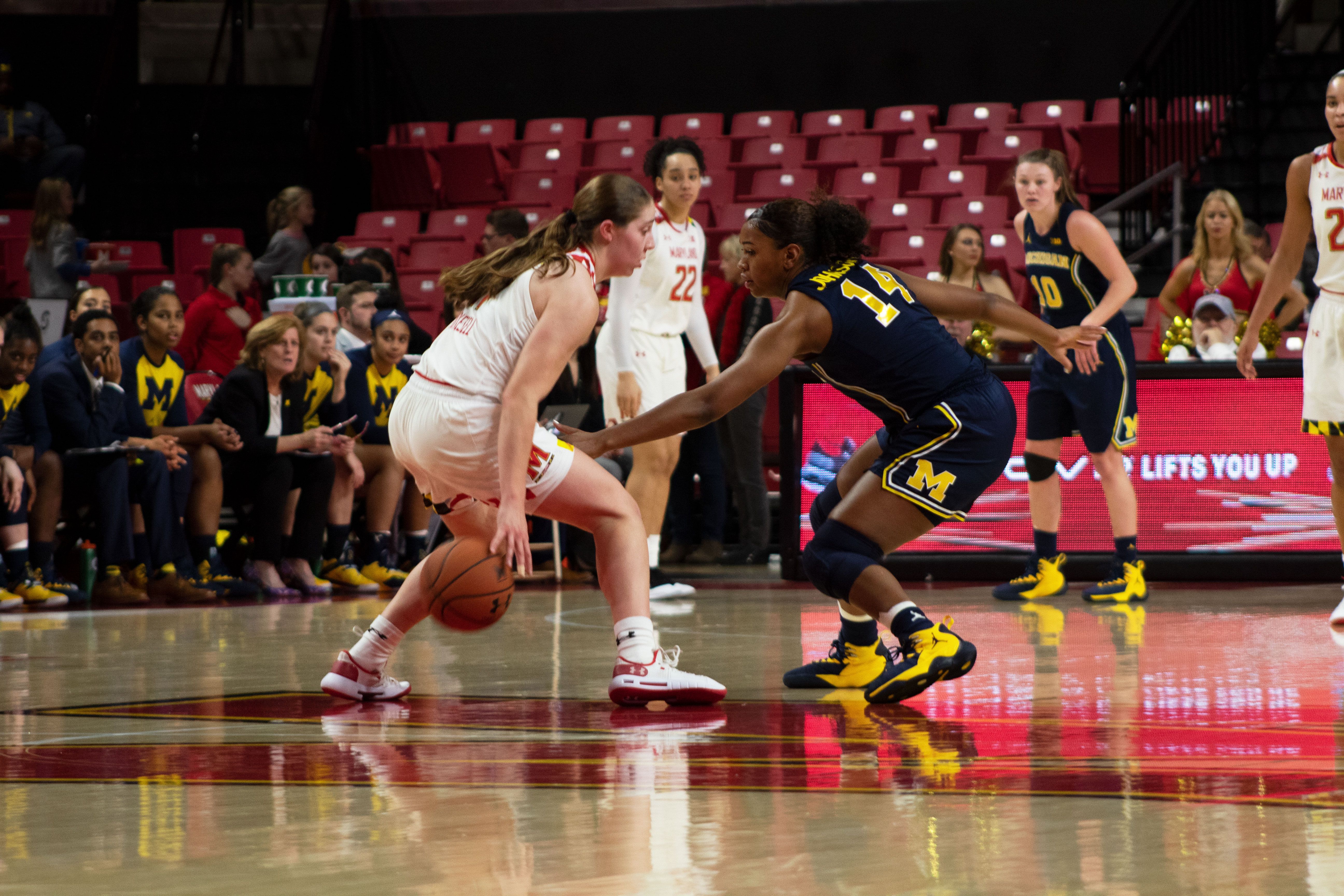 Guard Taylor Mikesell keeps the ball away from a defender during Maryland’s 83-69 win over Michigan at Xfinity Center on Jan. 12, 2019. (Frances Moyonero/The Diamondback)

When guard Amy Dilk converted a driving lay-in to pull Michigan in front 52-46 late in the third quarter, Maryland women’s basketball needed another late-game run, just as it did against Nebraska on Tuesday.

For the second straight game, the Terps delivered.

Forward Shakira Austin scored a pair of baskets through traffic, and guard Taylor Mikesell drilled a floater to put the Terps in front 53-52 behind a quick 7-0 burst.

And when guard Kaila Charles scored a transition lay-in to give No. 9 Maryland a comfortable 68-58 lead, the run had quickly grown to a 22-6 onslaught, and the Terps easily dispatched Michigan 83-69 behind an electric second-half performance.

“We had to kinda settle in that first half,” coach Brenda Frese said. “But I love our response out of the locker room.”

The Terps (15-1, 4-1 Big Ten) got off to another hot start offensively, opening 7-for-10 from the field to take a 14-13 late in the first quarter, but Michigan (11-6, 2-3) quickly countered with some pressure of its own. The Wolverines extended their full-court pressure, forcing 10 Maryland turnovers in the opening period and closing on an 8-0 run to lead 21-14.

Maryland settled down on offense, committing three giveaways and going 5-for-9 from beyond the arc in the second quarter. After a sloppy first quarter, the Terps had just five turnovers the remainder of the game.

“I’d like to see us get comfortable sooner to that press,” Frese said. “But nice to be able to see the response.”

Guard Channise Lewis, who finished with a game-high 11 assists, drilled a triple to pull Maryland within 25-22, and Mikesell found the bottom of the net on a transition trey on the next possession to even the score.

Led by Mikesell and guard Blair Watson with 17 and 14 points, respectively, all of the Terps’ starters finished in double-figures. But in the opening half, an infrequently used bench player set the pace for Maryland.

Entering the game, guard Sara Vujacic had logged just one minute and three points through four Big Ten contests. But Saturday, Frese turned to the junior in need of a spark early on, and Vujacic responded.

Vujacic buried a shot from the right wing to give Maryland a 3-point lead, and her second triple with a minute left in the half edged the Terps in front again, 35-32, with the Wolverines clawing back again and again.

“You’ve just got to trust your coach,” said Vujacic, who finished with eight points on 2-for-3 shooting behind the arc in 11 minutes, the most she’s logged since netting 25 minutes on Dec. 10 against Loyola. “And when you’re on the court, you’ve got to show that you can play.”

As Maryland found a rhythm offensively, its defense followed suit. Michigan was just 5-for-17 from the field in the second quarter, but the Terps clung a narrow 35-34 lead at the break due to the rough opening period.

The up-and-down affair continued after halftime.

Michigan pulled ahead 47-43 due to a 5-for-9 start from the field. And down 52-46, the Terps desperately needed someone to step up on the offensive end.

And just as she had done against Nebraska, Austin provided a major boost after halftime.

Austin scored a pair of baskets in the paint — she was fouled on both makes — and converted 1-of-2 foul shots to bring the Terps within a basket. She finished with 13 points and 15 boards to complete her sixth double-double of the season, and with seven blocked shots, she nearly notched the first triple-double of her career.

Matched up against 6-foot-5 forward Hallie Thome — who finished with a game-high 25 points and added 10 rebounds — Austin was able to find success on both ends of the floor despite facing a physically dominant frontcourt player.

“We practice finishing every day,” Austin said. “Not being scared of contact. I went into her body a lot, and I’m long enough to finish over her.”

In Austin’s first four Big Ten contests, the freshman averaged 4.0 points and 8.5 boards a game, and she registered just 3.75 minutes per contest after the break.

But on Saturday, Austin featured in all but two minutes after halftime, playing a significant role in a Maryland defense that held Michigan to 38.5 percent shooting over the course of the game. And when the Terps needed to make a push in crunch time, their defense held the Wolverines to just six points during a 16-point run that gave Maryland a 68-58 lead with 5:24 left.

For the second straight game, the Terps went on a huge run to secure the game. Maryland went 10-for-13 from the field in the fourth quarter, and Watson had 12 points in the final 10 minutes after entering halftime scoreless.

Behind a balanced offensive attack with all five starters finishing in double figures, the Terps notched a second consecutive comfortable conference victory that didn’t always seem destined for that outcome.

“A really good win against a really good team,” Frese said. “And now time to just continue to keep building off of this.”