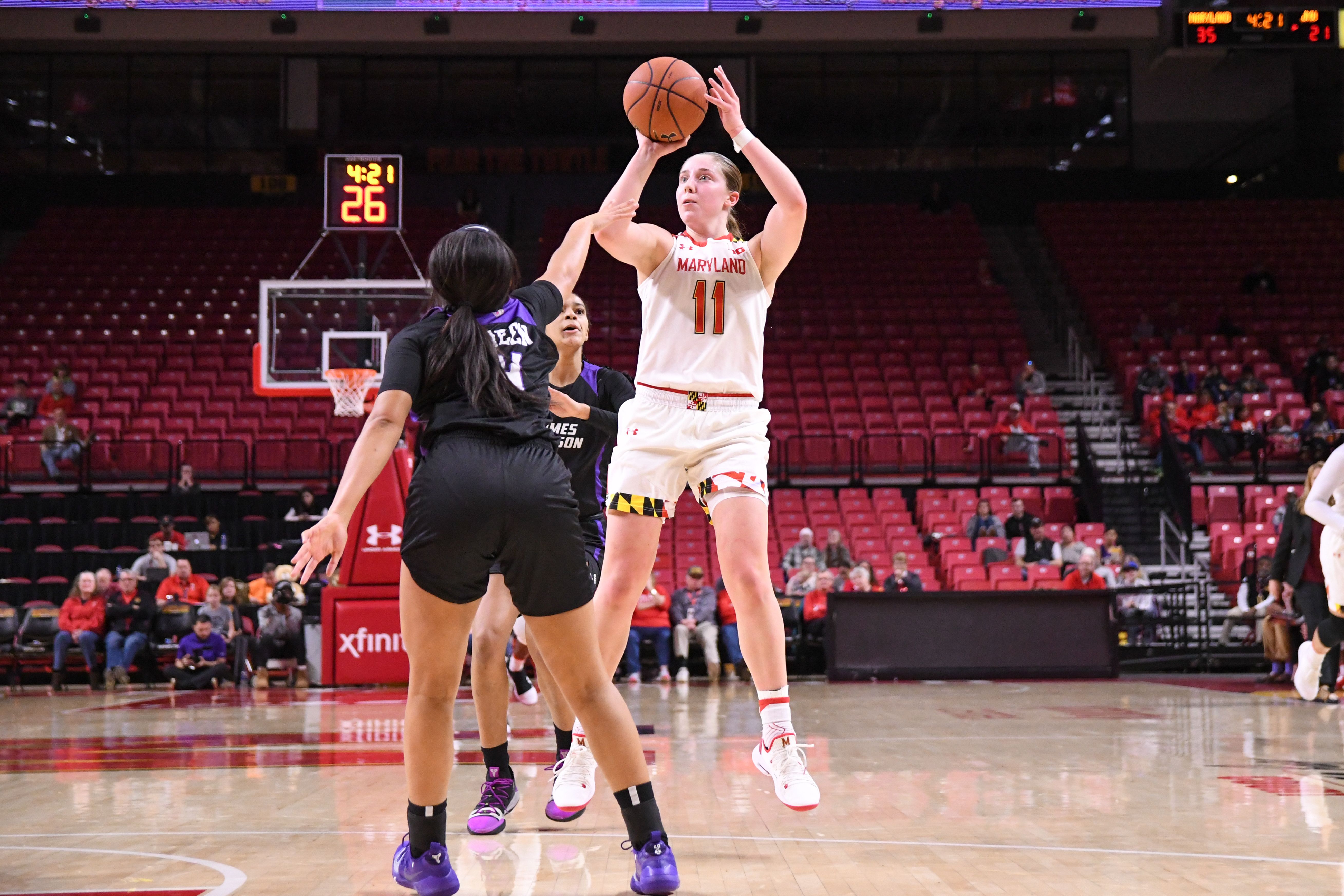 After Maryland women’s basketball guard Kaila Charles converted a putback attempt to end the third quarter, the Terps entered the final period Monday deadlocked with Rutgers in a late-game struggle for their second consecutive contest.

But unlike its triumph over Penn State on Friday, No. 4 Maryland didn’t finish the game with a dominant 18-0 run to win.

Charles lost the ball going up for a shot attempt down 67-63 with a minute remaining, and after guard Channise Lewis’ pass was intercepted the following possession, the Terps eventually ran out of possessions in their comeback attempt.

And Maryland fell to Rutgers, 73-65, for its first loss of the season as it failed to grind out a second straight Big Ten struggle.

“I thought we got beat by a better team today,” coach Brenda Frese said. “They shot the ball extremely well to start the game. They beat us in the paint. They beat us on the glass.”

The Terps struggled defensively against Rutgers early, just as they had against the Nittany Lions.

The Scarlet Knights made 3-of-5 threes to start the game and led 14-9 after just more than four minutes. A triple from guard Stasha Carey a minute later gave them a 19-11 edge that they didn’t relinquish until the fourth quarter.

Rutgers (9-3, 2-0 Big Ten) went an uncharacteristic 5-for-8 from deep in the opening period. The Scarlet Knights entered Monday making just 4.7 threes per contest, so their early success from long range appeared to take Maryland (12-1, 1-1) by surprise.

And although Maryland tightened up its defense in the second quarter, the Terps outscored Rutgers only 13-12 in the period, in part due to the extra possessions they gave the visitors.

With a 9-2 deficit in points off turnovers and an 11-3 deficit in second-chance points, the Terps entered the break trailing 41-36.

After halftime, Rutgers slowed the pace even further.

Each trip down the floor, the Scarlet Knights held the ball late in the shot clock to limit possessions, and Maryland’s poor shooting to start the final 20 minutes compounded the issue.

The Terps didn’t make a shot until guard Taylor Mikesell, who finished with a team-high 18 points, drilled a three with 3:20 gone in the half, and they didn’t make their next basket for two more minutes. When the game ended, Maryland had taken just 47 shots to Rutgers’ 64 attempts.

“That’s how they’ve always played,” Frese said. “That’s something we were focused on. Being able to come out and understand how valuable possessions were going to be.”

But despite the pregame area of interest, the Terps didn’t make the most of their possessions. With 15 turnovers and a surprising 38-28 rebounding deficit — including 19 Rutgers offensive boards — Maryland managed just 41 points over the final three quarters.

“[Rutgers was] being very physical and tough, especially denying passes,” said Charles, who finished with 15 points. “We just have to work on getting open and coming to the ball and making sure we take care of the ball.”

Still, Charles’ layup with 36 seconds left in the third quarter tied the game, 47-47, for the first time since the 8:02 mark in the second quarter, which brought the Xfinity Center crowd to its feet as Frese pumped her first to urge her team on.

And after Charles drilled two free throws to give her team a 51-49 lead early in the fourth quarter — the first since she put the team up 2-0 with a jumper on the first possession of the game — it appeared as if the Terps were going to claw out a second conference battle.

But a string of late-game Maryland turnovers and costly shooting fouls, where Rutgers converted 11-of-12 shots from in the final frame, doomed the Terps and prevented them from advancing to 13-0 on the season.

“We’re going to get everybody’s best game,” Mikesell said. “[Frese] was big about that coming in, and we finally had to experience it.”