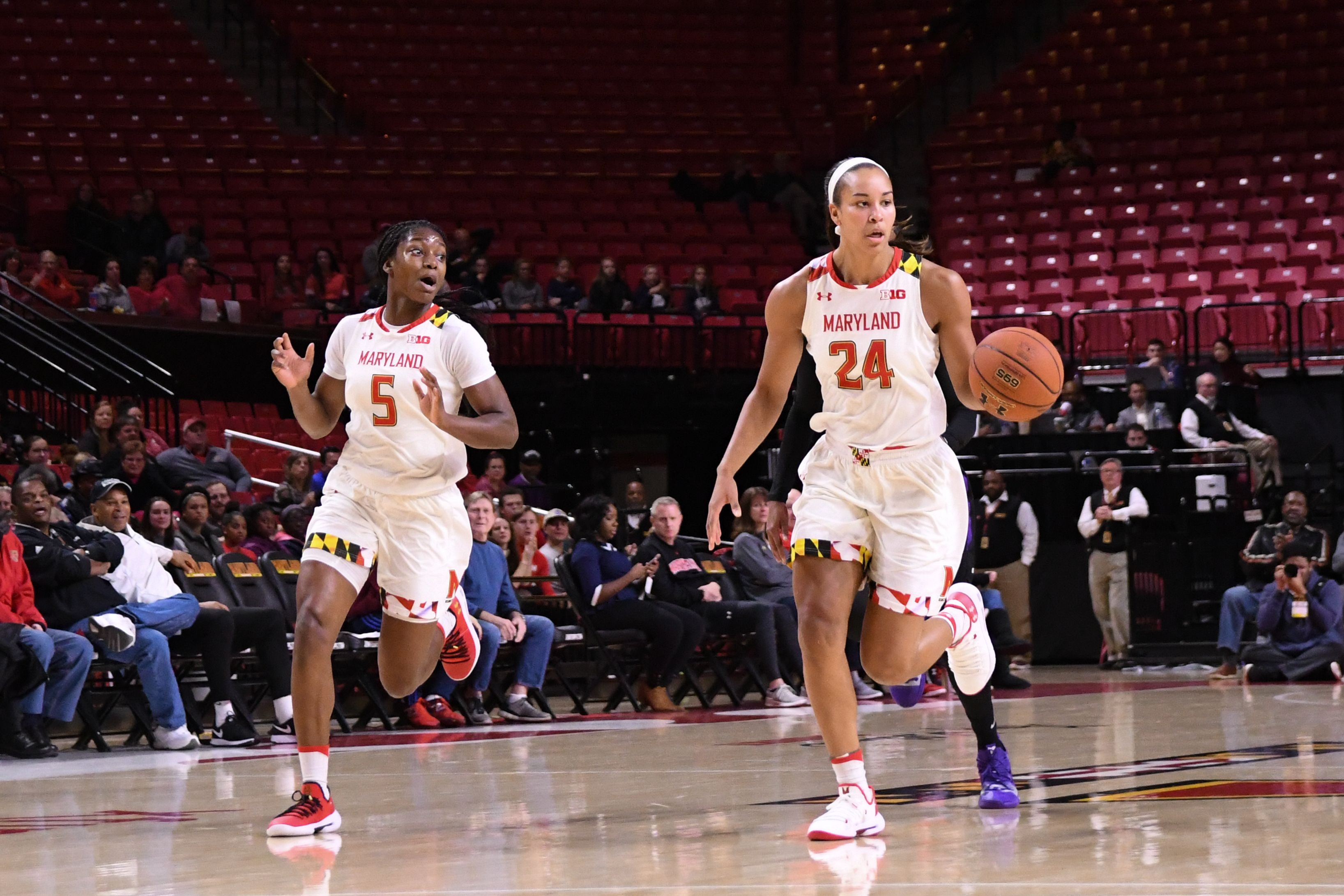 As Maryland women’s basketball trailed Penn State by two with 8:28 left in the fourth quarter Friday, guard Kaila Charles was fouled on her way to the basket with a chance to tie the game.

She drilled both free throws, and the Terps would go on to score the next 16 points.

Guard Blair Watson drained a three-pointer to cap off the 18-0 run to end the game and finish off a dominating 21-4 scoring discrepancy in the final frame.

After trailing at the end of each of the previous three quarters, No. 4 Maryland turned it up defensively and broke open the game down the stretch to dispatch Penn State, 77-61, in its Big Ten opener.

“I thought it was a wakeup call for us,” coach Brenda Frese said. “Fourth quarter we were able to put our head down defensively and really start getting really aggressive.”

Early on, however, it appeared as if Maryland might easily handle the Nittany Lions.

And at the onset, the plan seemed to work just as Frese drew it up.

Maryland (12-0, 1-0 Big Ten) led 15-8 after six minutes, but the Nittany Lions began to exploit the usually tenacious Terps’ defense with speed, finding success infiltrating the paint. Penn State (7-5, 0-1) scored 18 points in the paint in the opening half.

After Austin secured an early miss by guard Kamari McDaniel — appearing to have gathered a much-needed defensive stop with Penn State threatening — McDaniel stripped the McDonald’s All-American and scored an up-and-under lay-in to even the score at 15.

The Terps trailed, 21-18, after the first quarter, due mostly to six first-quarter turnovers. Penn State took off right where they left off in the second quarter, and with six minutes remaining before halftime, the Nittany Lions held a 30-23 edge.

Maryland countered as guard Taylor Mikesell drilled a three-pointer and an off-balance lay-in to level the score at 30, but Maryland still trailed, 41-39, at the half.

The Terps’ 45.7 percent from the field in the opening half was an improvement from the 36.8 percent they shot in their previous contest against Delaware on Dec. 20, but 10 first-half giveaways negated the impact of the improved shooting. Maryland would finish with 18 giveaways.

Meanwhile, the 41 points allowed at the break were the second most the Terps had given up in any half so far this season, and the Nittany Lions managed to shoot 44.4 percent from the field before halftime.

Following the break, Penn State and Maryland went back-and-forth for the entire third quarter, but the Nittany Lions stayed in front. Penn State entered the final quarter clinging to a 57-56 advantage.

But despite trailing with just 10 minutes left in the game, the Terps began to make inroads on the defensive end. The Nittany Lions shot just 28.6 percent in the period.

Frese decided to turn away from Austin down the stretch — the freshman played just two minutes in the second half. Despite the 6-foot-5 forward’s absence, the defense improved significantly.

Austin struggled in her first Big Ten contest, as the shot-blocker scored just five points in addition to her 11 rebounds.

Maryland held Penn State to just four points on only 16.7 percent shooting from the field, and the Terps held the home squad scoreless over the final 8:49.

One of the biggest adjustments came via the Terps’ defense of guard Teniya Page. She scored 22 points in the first three quarters, but netted just two points in the fourth quarter.

“We just made her shots tough, because we know she’s going to shoot it no matter what,” said forward Stephanie Jones, who finished second on the team with 17 points while adding five boards.

By doubling on ball screens, Maryland forced Page into four turnovers in the last frame. She had just one in the first three quarters.

Although Maryland was gashed down low in the first half, the Nittany Lions managed just five points in the paint after the break. And with Charles powering the Terps with a team-high 23 points — 16 in the second half — they were able to pull away late.

And despite the rocky start — which could be attributed to the eight-day layoff since the Terps’ previous contest — Maryland’s defense picked up down the stretch. It stifled Penn State on the offensive end and powered the Terps to 18 unanswered points to secure a 77-61 win, finding a late solution to their tightest contest since their Nov. 24 win over Georgia.

“We came out a little bit flat in the first half, but we regrouped at halftime,” Charles said. “Instead of putting our heads down, we stuck together. We dug it out.”