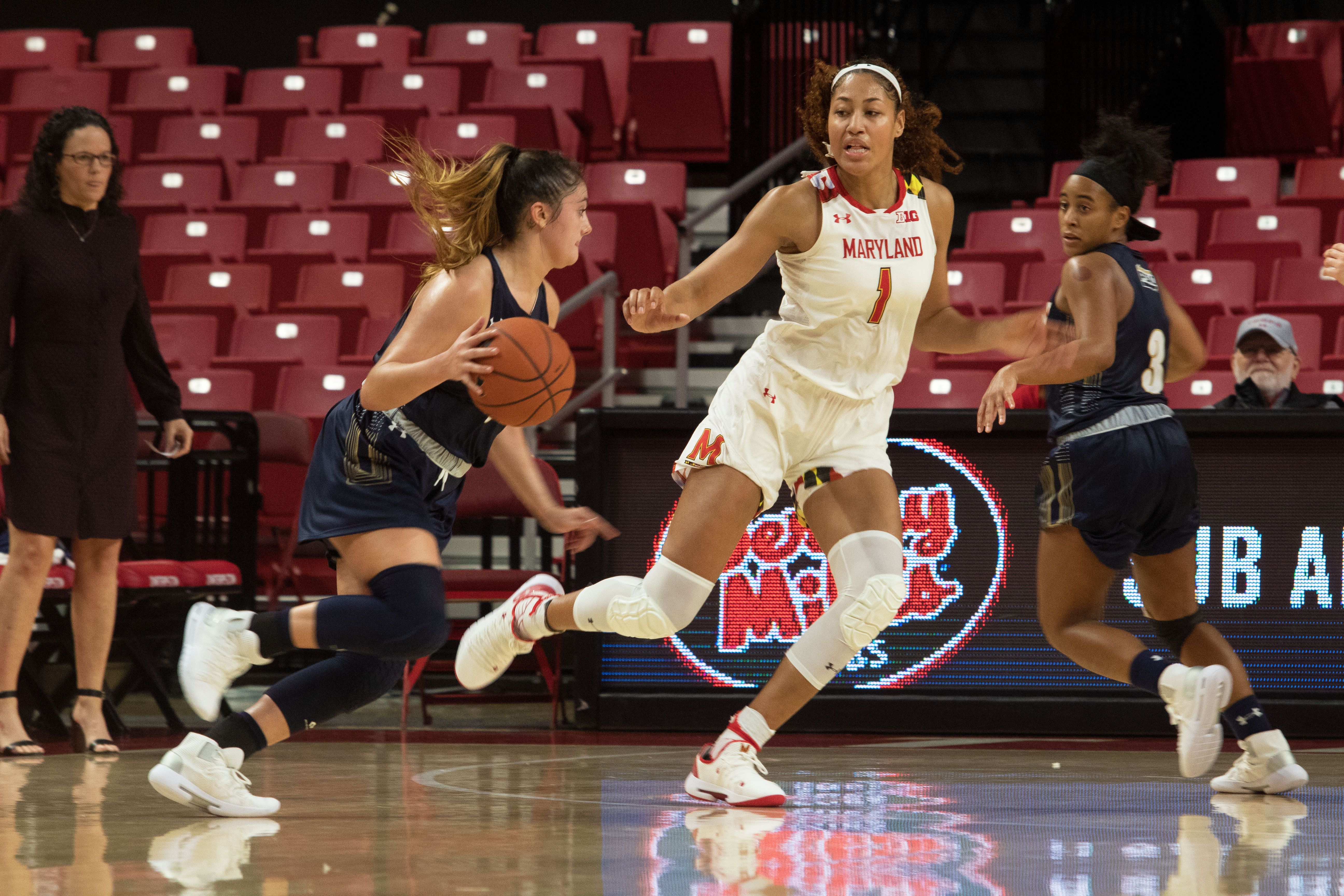 “Eight,” she corrected, well aware of the total’s significance.

After Austin denied guard Alison Lewis’ shot just more than a minute after halftime for her fifth rejection of the afternoon, her dad yelled “three” from the sideline — a reminder that she was just three blocks away from tying the school record.

Austin blocked two more shots in the period, and she matched the 42-year single-game record with a block in the final quarter, but she came up just short of setting a new mark.

In her first season in College Park, Austin has etched a reputation as a fierce defender in the frontcourt, and her shot-blocking acumen was on full display against the Blue Hens in her first career start.

“She’s a matchup nightmare when you talk about her length,” coach Brenda Frese said. “She just continues to stay hungry. She definitely elevated us as a team.”

Before facing Delaware, though, Austin hadn’t factored in the starting squad.

In Maryland’s first 10 games, four players had started every one. And with guard Blair Watson having started eight contests entering Thursday, the Terps had a clearly defined starting five.

Austin had been the first player off the bench in most contests, and her 23.9 minutes per game is fifth most on the team.

But against Delaware’s smaller frontcourt — in which no player was taller than 6-foot-3 — Frese saw an opportunity to use Austin’s height to stifle the Blue Hens. Austin took the floor at the game’s inception while guard Channise Lewis — who had started the previous 10 games — began off the bench, and guard Taylor Mikesell slid over to run the point.

The lineup shift gave Maryland an even taller starting five, and Delaware was visibly uncomfortable on offense.

With Austin patrolling the lane, the Blue Hens were forced to consistently settle for contested midrange jumpers and off-balance attempts. They shot just 25.6 percent from the field in the first half, while Austin swatted away four attempts.

And although Delaware picked up the pace offensively in the second half, it still converted at only a 35.5 percent clip from the field in the period.

Meanwhile, Austin proved she belonged in the starting lineup as she picked up another four blocks in the half to match the school record, while also adding 17 points and 13 rebounds to complete a double-double in her first career start.

“I was pretty excited. I was waiting for this day to come,” Austin said. “I was like, ‘I’m not going to let anything affect my game. I’m just going to keep playing me,’ and it paid off today.”

Through 11 games, Austin has defended the post at a historically significant pace. Her 35-rejection total ranks third in the NCAA, and her 3.18 blocks per game ranks fourth nationally.

At that rate, the school record for blocks in a season could be within reach. Kris Kirchner netted 80 blocks in the 1978-79 season, and at Austin’s current pace, the freshman would reach that mark by the 26th game of the season.

With Big Ten play kicking off against Penn State on Friday, Maryland will need Austin to stay productive against bigger frontcourts the rest of the way.

If Austin can continue her dominance and record-setting pace through conference play — which has earned her three Big Ten Freshman of the Week awards — then it may be difficult for Frese to keep her out of the starting lineup as she builds on a productive freshman season.

CORRECTION: Due to an editing error, a previous version of this story said Shakira Austin had earned two Big Ten Freshman of the Week awards. She has earned three. This article has been updated.